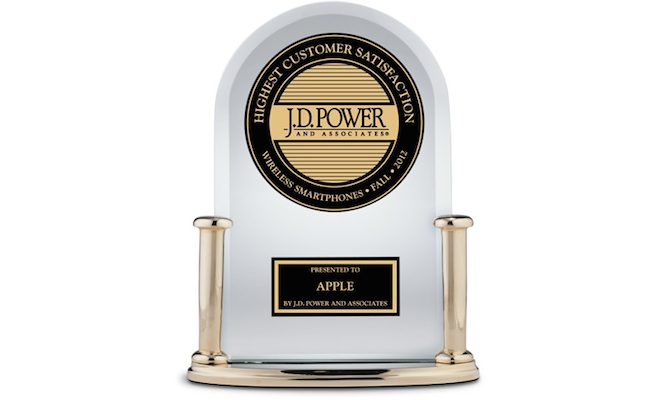 A new JD Power study says the smartphone operating system is the key differentiator in customer satisfaction. Among tier 1 wireless carriers, Apple ranked highest in overall satisfaction among customers of AT&T (855), followed by customers of T-Mobile (848) and Verizon Wireless (846). Among customers of Sprint, Apple and Samsung tie for highest rank (845 each).

The fact that Apple ranked highest is not surprising given the overwhelming success of its iPhone launches, although the study is based on iOS 7 with iPhone 5 and iPhone 5s. The order of carrier rankings is intriguing, as I would have expected Verizon to rank higher since they charge more for service and boast higher network speeds in the U.S. Perhaps the network has become ubiquitous?

“Providing an easy-to-use, yet powerful operating system with the ability to customize applications to suit individual needs is essential to providing a positive wireless experience,” said Kirk Parsons, senior director of telecommunications services at J.D. Power. “To get ahead of the competition and satisfy customers, manufacturers must meet and exceed the expectations of customers, ensuring the OS allows the device features and services to work intuitively and seamlessly. Doing so will help drive satisfaction and loyalty to the brand.”

The Wireless Smartphone Satisfaction Study measures customer satisfaction based on four factors including performance (29%); features (26%); physical design (23%); and ease of operation (22%). Customer satisfaction was measured with wireless OEMs across tier 1 wireless carriers (AT&T, Sprint, T-Mobile and Verizon Wireless), from 1,484 traditional device customers who have owned their current phone less than 18 months. The study was fielded between September 2013 and August 2014. Satisfaction is calculated on a 1,000-point scale.