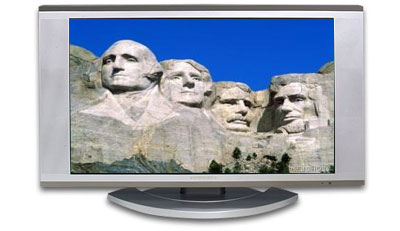 It was hard not be impressed when I first viewed the Kreisen LT-30FMP 30-inch flat panel LCD HDTV monitor. The HDTV over-air-picture was stunning when I watched Monday Night Football in high definition (720p). The LCD handled bright scenes very well, and at times the picture looked 3-dimesional in HD.

HD is sweet
Its native resolution of 1280×768 is ideally suited for watching 720p HD on ESPN and ABC. The other HD format 1080i is automatically re-scaled to 720p and still looked superb when I watched The Tonight Show in HD. DVDs (480p) were also a pleasure to watch on the LT-30FMP. Regular TV (480i) was not exceptional, but on par with other fixed panel displays I have seen.

Eyeing a problem
Only after extended viewing did I start to notice some of its shortcomings. Reds seemed to be over-emphasized, and the picture at times seemed overly bright. Not surprisingly, the contrast and brightness settings were set almost all the way up, which is a common tactic manufacturers are using to make flat panels look better on a showroom floor. Black levels were very dark, but lacked depth and shadow detail, which made nighttime (darker) scenes difficult to make out.

Revealing tests
I used the AVIA DVD calibration disc, which confirmed my initial observations and revealed more faults. First off, the LCD could not distinguish between black and dark gray using the grayscale bar pattern no matter what the brightness setting was. Color accuracy was the next hurdle. Correctly setting red, green and blue was more problematic using the color bar pattern test. I could get blue set correctly, but could never get green and red accurate. I ended up with green -5% and red +10% from ideal. The pixel-cropping pattern showed the image was slightly off center. 15 pixels were cropped at the top and left, 5 pixels from the bottom and 12 from the right. 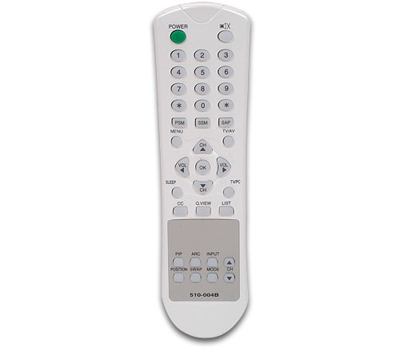 Nice features
The remote control was simple and easy to use with good size buttons. The TV has some nice features like PIP (picture-in-picture), parental controls, and a sleep timer. It has a multitude of connection options, which include coaxial (antenna/cable), composite, component, S-video, VGA (computer), and DVI (computer only, not HDCP). The rear panel also includes a headphone jack, and subwoofer out, which I did not test.

HD Input Issues
I was disappointed with the units video input capabilities for HD. First, I learned the DVI input did not work at all when connected to my LG LSS-3200A over-the-air HD receiver, because the LT-30FMP is not DVI-HDCP compliant. The component input only accepts 480p, which is fine for connecting a DVD player, but will not show true HDTV. I could only get true HDTV (1080i/720p) working with the VGA input, which is labeled PC Analog on the LT-30FMP.

Unexpected aspect
The LT-30FMP includes four aspect ratios — 16:9 (default), 4:3, 1:1 and Zoom. The ARC (Aspect Ratio Control) button on the remote cycles through each setting. Unfortunately it doesn’t remember the previous aspect ratio setting. Instead it always defaults to 16:9 (widescreen) every time the TV is turned off/on. Eventuallly, it seemed like I was hitting the ARC button almost every time I turned the TV on to get to 4:3 mode. However, some cable/satellite boxes will correctly set aspect ratios, so this might not be a problem for you.

Front and center only
Another important issue that you should be aware of about the LT-30FMP is the off-axis viewing. The picture fades and loses much of its contrast when you are not seated directly in front of the display at eye level. The problem is easy to notice when you are at least 45 degrees to either side, so you will want to consider how many seats in your room are off-center.

Final thoughts
Even with all of my criticisms, I still found the LT-30FMP more enjoyable to watch then a 42-inch EDTV plasma I previously owned. The LT-30FMP was by no means a perfect display, but its faults were somehow easy to live with. I especially enjoyed sports in HD, and when I connected the display to my computer it seemed downright huge! The LT-30FMP is the current low price leader, and could be a worthwhile addition to a bedroom, dorm room, kids playroom, game room or office.