Two of the most stylish and luxurious headphones you can buy in 2015 are the Sennheiser Momentum Wireless over-ear and Bang & Olufsen BeoPlay H8 on-ear headphones. They each cost $500 and pack in every feature you’d want in a headphone and them some — Bluetooth wireless, active noise cancelation (ANC), apt-X, real leather, metal finishes, and long battery life.

On looks alone, most would choose the BeoPlay H8 and for many a very wise choice. However, audiophiles (including myself) are likely to say the Momentum Wireless sounds better. However, there are other differences you should be aware of that may sway your opinion one way or the other. 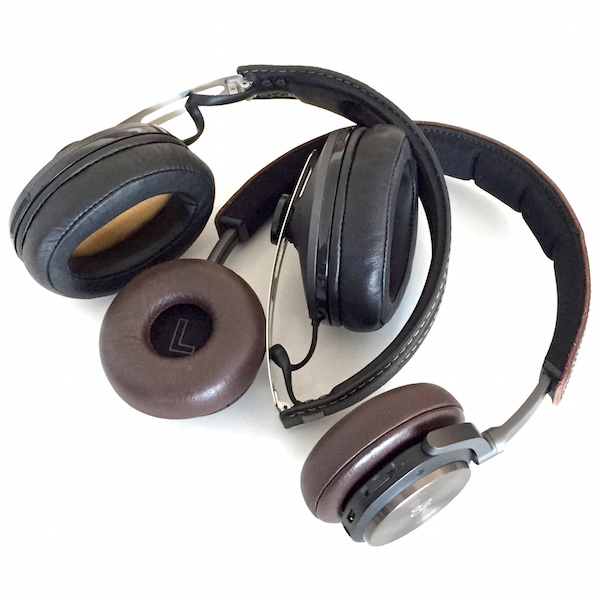 Overview
The Sennheiser Momentum Wireless (M2 AEBT) is the company’s most expensive wireless headphone, but they also make audiophile headphones for triple the price. The Momentum line also includes lower priced, similar looking wired over-ear and on-ear headphones (1st & 2nd generations of each). I was able to test both 2nd-gen Sennheiser headphones as well, but it should be noted the Momentum Wireless is larger in size, with sound quality that outclasses the models that carry the same name — even the over-ear wired Momentum.

The BeoPlay H8 is the most expensive headphone Bang & Olufsen offers, and like most of their products does not disappoint. It is beautiful, well designed, and comes with innovative swipe/tap gesture controls on the right earcup. It works like an iPod attached to your ear. You swipe left/right to change tracks, use a circular motion to adjust volume, and enable/disable ANC with up/down swipes. You’ll have it figured out in a few minutes — it’s that easy.

Wireless Setup
Each connected quickly via Bluetooth to my iPhone 6. The H8 beeps when it connects, and the Momentum emits an audible voice saying whether it is “pairing”, “connected” or “no device found.” This was a nice perk that makes wireless setup very easy. But more importantly, the Momentum remembered the pairing and automatically re-connected after powering off/on. On the other hand, I found myself manually needing to go into iPhone Bluetooth Settings to get the H8 to reconnect for the same routine. Needless to say, Momentum is easier for wireless connectivity.

Since Momentum connects so easily, I realized I could start enjoying music right away, without ever touching my iPhone. I could just put the headphones on, press the on button, and press play (on the headphone) to start listening exactly where I had left off. For example, if you’re phone is in your pocket or purse, you can just grab the Momentum and start listening within seconds. This feature alone, made me want to use Momentum more often and should be standard issue on any wireless headphone going forward. 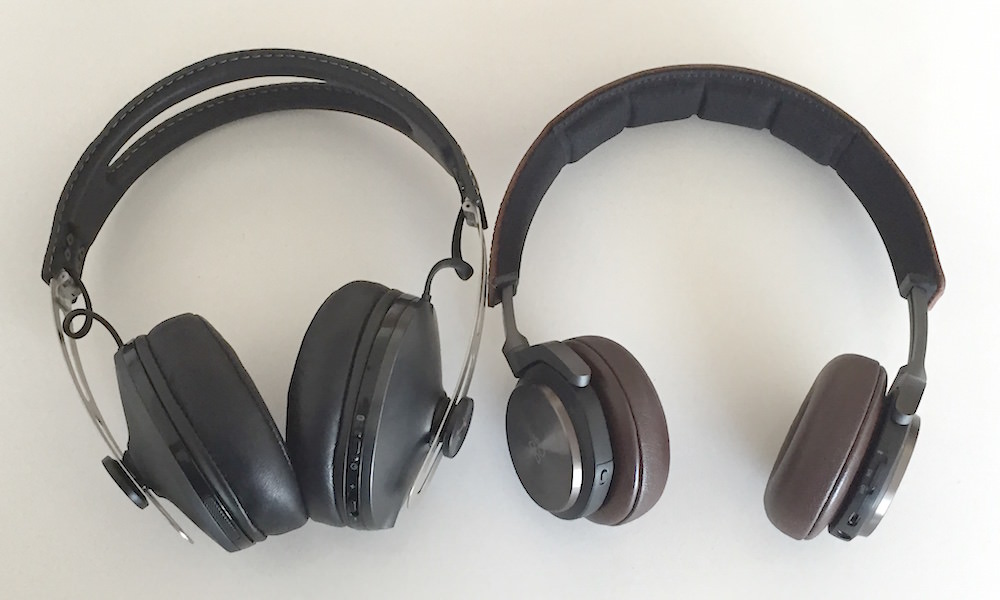 Listening Options
With each headphone there a many ways to listen to them. You can listen with active noise-canceling on or off, or with an included wire instead of wireless. Both need to be charged for wireless and/or ANC listening to work. The Momentum claims 22 hours of wireless use with ANC on, versus 14 hours for the H8. The wired connection will always sound better, and both can still be used in wired mode if the battery is dead.

Both headphones use micro-USB connectors and recharge fully in 3 hours. The connector is the same as most Android smartphones, but iPhone users will have to lug around an extra cable. In addition, you’ll also want to travel with the 3.5mm headphone wire for when the battery runs out. The Momentum uses a proprietary twist-in cable that prevents the cable from being pulled out. The BeoPlay H8 uses a standard male/male 3.5mm headphone audio cable that is easier to replace should you lose it.

Audio Observations
The BeoPlay H8 are an extremely good sounding headphone, and are one of the best on-ear headphones you can buy. To date, I have not heard a wireless on-ear headphone that both sounds and looks better. Even with that being said, they are not perfect. Wireless connectivity could be automatic, and the active noise cancellation feature could be better. ANC does a fine job of drowning out outside noise, but I felt it inadvertency removed some of the musical track. When ANC is switched on, the volume drops a couple decibels, bass muddies a bit, and the sound loses some punch. Alternatively, ANC was helpful with softer or vocal music with quieter passages when bass was less noticeable. As an audiophile, I’m nitpicking, but I found myself turning ANC off most of the time with the H8. Although, I did discover that ANC worked better with a wired connection (a feature Sennheiser doesn’t offer). However, H8 gesture controls are disabled in wired mode.

The Sennheiser Momentum Wireless can easily stake a claim as best wireless headphone. I was pleasantly surprised a Bluetooth headphone could sound this good. Music sounded clear, well articulated, and precise. Imaging was outstanding, as I could pinpoint sounds arriving from all parts of head. In some cases, audio felt like it was shooting through my brain. The Momemtum Wireless are that good, plain and simple. But what I also liked was how easily they re-paired and were to control. There is a single button on the right earcup that is easy to locate and feel. It slides up/down for volume and can be pressed to start/stop tracks, or double pressed to skip. Although it’s not as sophisticated as the H8, the controls functioned just as well.

The Momemtum active noise-canceling feature is always on and there is no way to turn it off, unless you power-off and listen via connected wire. That made comparing sonic differences harder, because the wired connection will always sound better. However, Momemtum’s ANC is very good, and having the feature work this way gave me one less thing to wonder about. The H8 enables/disables ANC with a simple swipe up or down on the right ear cup, so it was easy to compare and change to your preference.

Downsides
As good as both headphones are, there are areas that could be improved. Both headsets include a microphone for hands-free calling, but neither performed well. In both cases the caller on the other end could tell I was not talking directly into the phone. Wind noise was transferred into each headset, which made listening on windy days less enjoyable. It was a little worse on the H8, but annoying on both. Although both weigh about the same (9 oz.) and have nicely padded ear cushions, neither was exceptionally comfortable after 30 minutes. The Momentum fit tighter, and even though they are supposed to go over your ears, I felt more pressure build up. Lastly, the downside of any noise-canceling or wireless headphone is the hassle of recharging. You need to remember to turn them off manually, or you’ll be recharging more often. Only the BeoPlay H8 has auto shutoff.

Conclusion (original review was posted March 23, 2015)
If you gotten this far, there is quite a bit to remember. BeoPlay H8 wins on style, comfort, and coolness. Sennheiser Momentum Wireless wins on sound quality, connectivity, battery life, and active-noise cancelation. It’s a tough call, because both sound well above average and any buyer would be very happy owning either. Ultimately, I found myself grabbing for the Momentum Wireless more often, mainly because they were more convenient and sound amazing.

Long Term Update (July 9, 2015)
Since posting my original review, I have been informed by Bang & Olufsen the BeoPlay H8 does Bluetooth re-connect automatically. If you never turn them off, they will disconnect and reconnect automatically when in range. However, I was manually sliding the power button to “off” to conserve battery. In the case when they power back “on” they won’t Bluetooth re-connect instantly, but will eventually. The trick is to slide the “on” switch up (to Bluetooth symbol) for 3-seconds until a blue light appears. Then wait about 5-seconds and re-connection should occur. In my eagerness to get it to work fast, I just wasn’t waiting long. However, it’s not quite as simple to do while you’re wearing them. You’re best bet is never turn them off and utilize the auto shut-off feature, I previously didn’t realize it had. 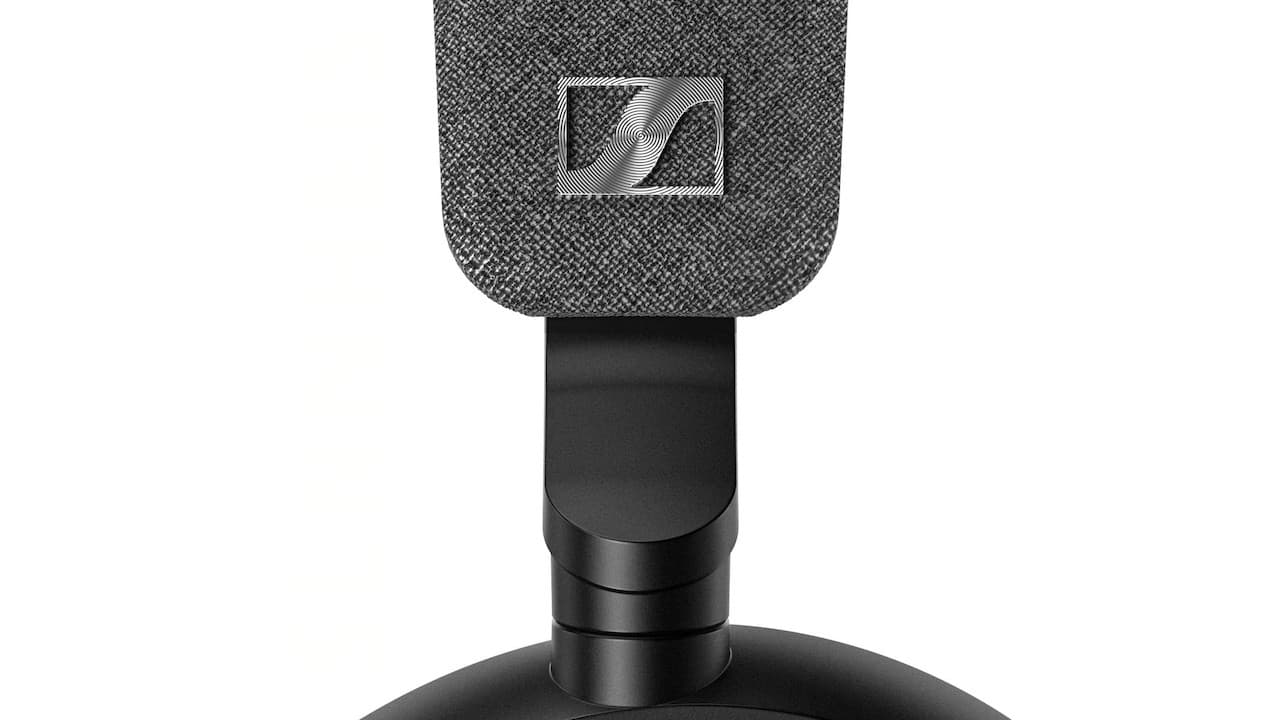 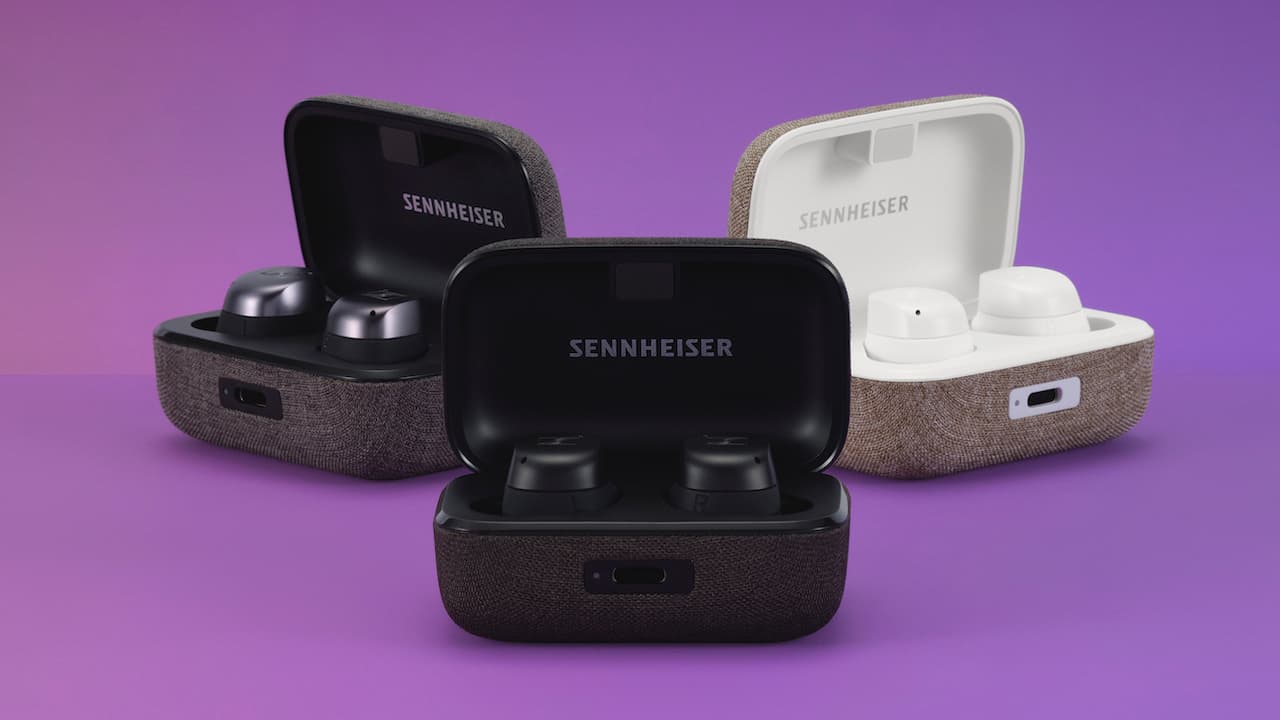 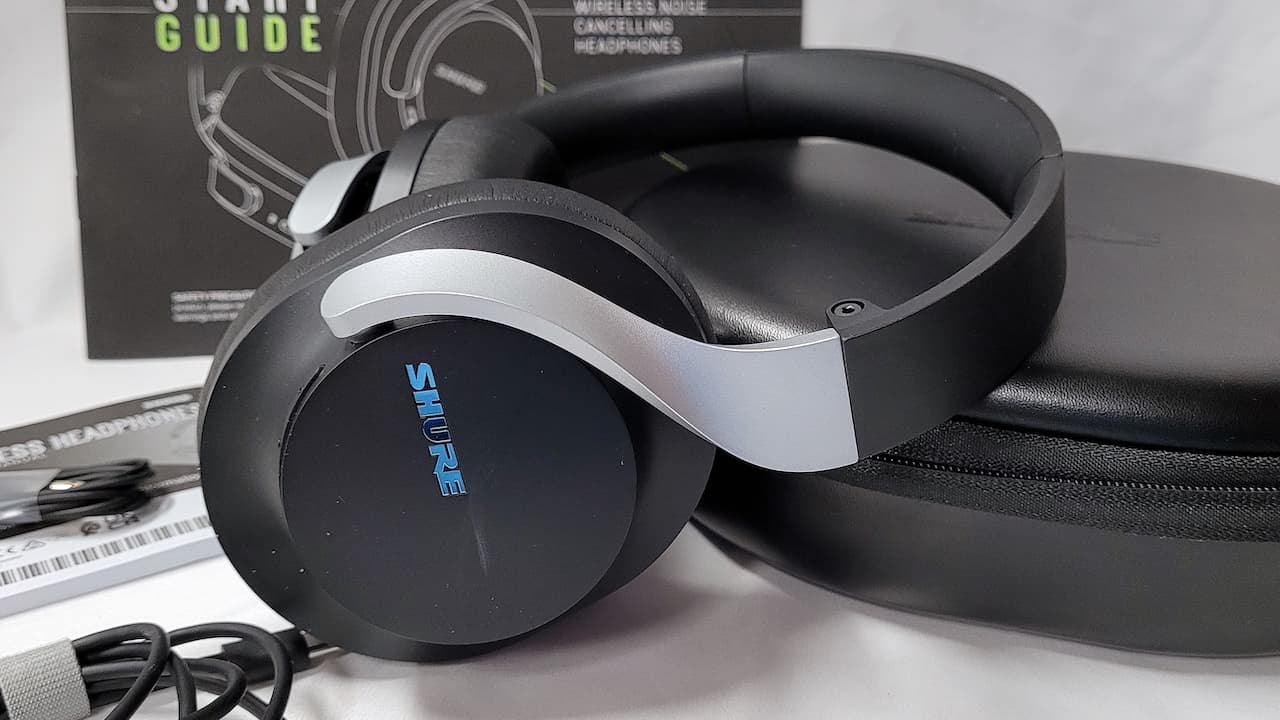 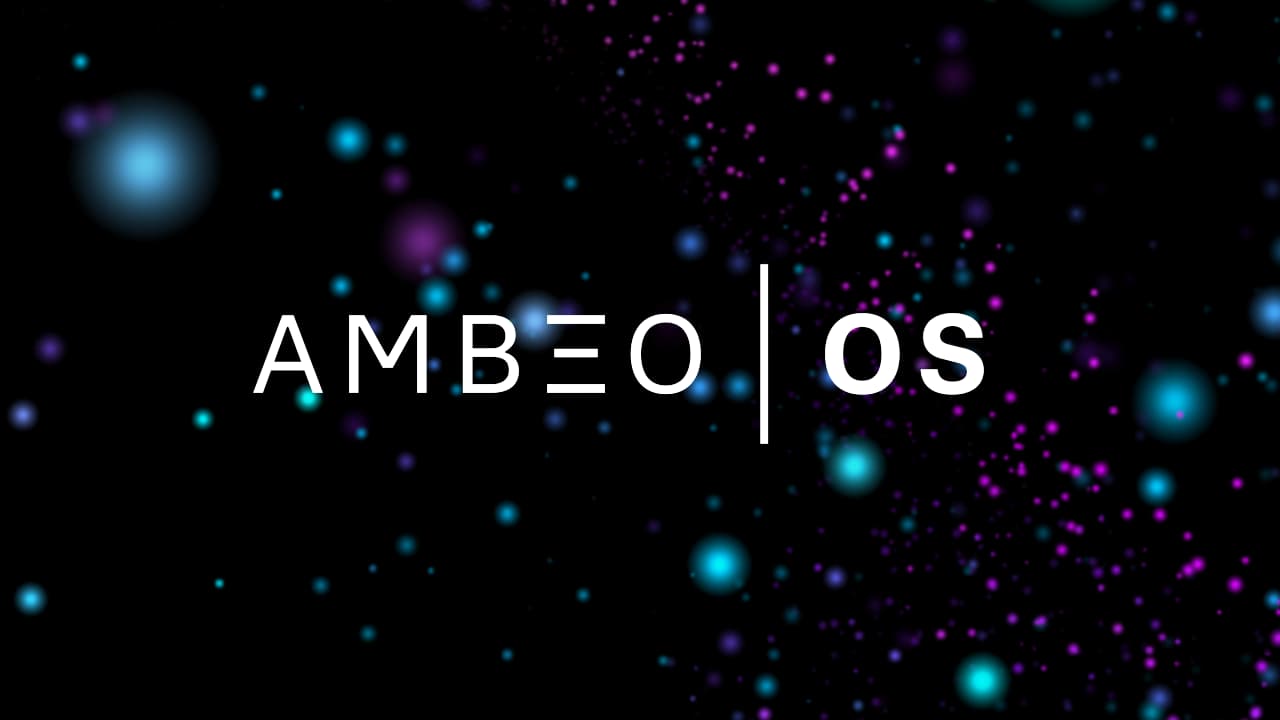 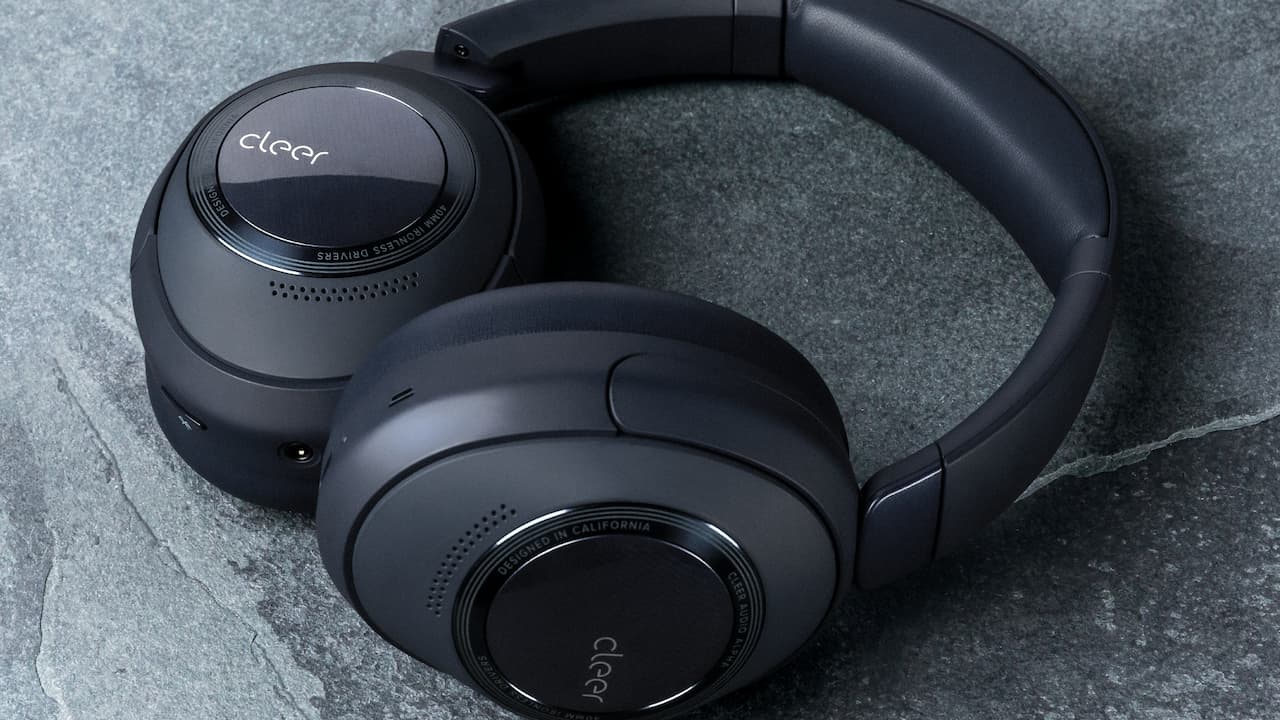 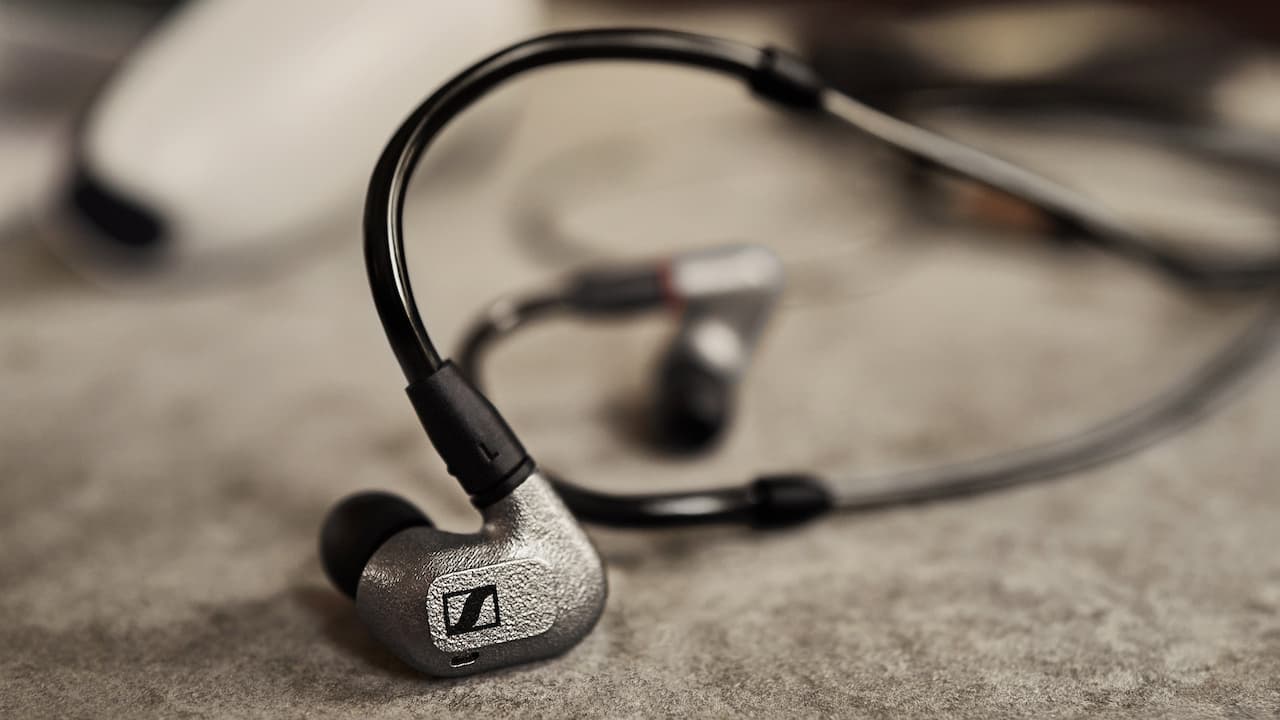