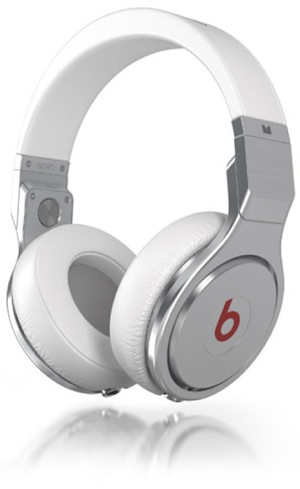 Over-Ear Headphones Give DJs and Music Lovers Unprecedented Performance, Mobility and Durability for Work and Play

The new over-ear Beats Spin headphones combine sophisticated construction and advanced sonic technologies to deliver the power, extra durability and sound isolation that until now has been lacking in professional headphones. Beats Spin headphones are tailored for use by working DJs, producers, engineers and musicians, both in the studio and onstage.

Dr. Dre noted: “Our first headphones delivered what we wanted: to hear the music the right way, the way I do. Now we’re introducing headphones that let you use them the way I do. We created headphones that are specifically designed for the people on the frontlines: engineers, producers, djs… I basically wake up with headphones on…. trust me, these are the sh*t.”

“The DJ and recording engineer are ground zero of making and presenting music to the world. We believe we have created the perfect headphone to marry those two worlds,” said Jimmy Iovine, Chairman of Interscope Geffen A&M Records.

Noel Lee, the Head Monster, noted: “To create Beats Spin, Monster and the Beats by Dr. Dre team conducted in-depth research with many of the industry’s top professional recording artists, engineers and DJs to find out just what they wanted in a great headphone. One of the things we heard most from them is that they need a super-durable headphone that could be counted on for repeated use. In addition to making this and other specific professional concerns a top priority, our engineers worked hard to develop a headphone with impeccable sonic performance that would be ideal for everyday use by anybody who is truly serious about their music listening. The result is a first-of-its-kind high-performance headphone with a host of extremely useful innovations that will literally change the way pros think about their headphones and how they use them in their work and their leisure time.”

Beats Spin new and innovative features and capabilities include: