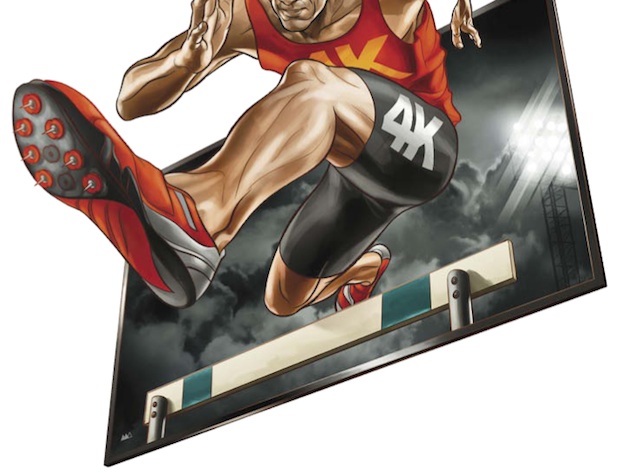 During the London Olympics this summer, some viewers around the world will get a glimpse of television’s next vision. Ultra high-definition TV (UHDTV) — also known as 4K and Super Hi-Vision — telecasts of selected Olympic events will be shown at public venues globally, starting in late July. Britain’s BBC will display 4K coverage on 15-meter display screens around London, and NHK plans to show some games on similar big screens. A 4K feed is also scheduled to be on display in Washington, D.C., although details have not been disclosed.

Visitors at the 2012 International CES in Las Vegas in January got an advance peek at TV’s next wave of display technology, which delivers four times the on-screen picture information of today’s best HDTV, hence the term “4K” to describe the new category. Its pictures are displayed in 3480 x 2160 resolution or about 8.3 million pixels compared to a maximum of two million pixels for current HD.

“The special feature of 4K is that its higher resolution allows for more detailed pictures and larger screen size,” explains Tim Alessi, director of new product development at LG Electronics, which showcased an 84-inch Ultra HD screen at CES. “That means viewers can sit closer without seeing pixel grid. 4K adds the extra pixel density that you wouldn’t see on a regular screen.”

That visual intensity is why the numerous CES demonstrations of 4K frequently generated “wows” and awestruck gasps as viewers took in the extraordinary colors and clarity of 4K images, often shown in side-by-side comparisons with conventional HD monitors. The picture quality was breathtaking at standard viewing distances and was vividly clear farther back across the booths. LG, Panasonic, Samsung, Toshiba, Sharp, Sony, Vizio and others showed prototypes of 4K sets which may reach market by late this year.

Sony showed three home theater displays featuring 4K technology, including a demonstration up-scaling a 1080p image to 4K resolution. One of the displays featured a Sony 4K projector, a home version of devices being used in digital cinema.

Analysts acknowledge that the 4K juggernaut is in its earliest phase. Even the name is still up in the air, with various terms including “ultra HD” and “super HD” still bandied about to describe the emerging category. Arriving at about the same time as the new big-screen OLED (Organic Light Emitting Diode) technology, which is an emissive electroluminescent display format, 4K resolution technology opens the screens for incredible visual experiences and also for more complicated consumer options.

“This wave of increasingly higher resolution displays may be the stepping stones across the evolutionary path toward the virtual holodeck” — an immersive visual experience, predicts Steve Koenig, director of industry analysis at CEA. He also sees the evolution of technology at work here. For example, 4K with its greater resolution may ease the way for passive 3D glasses, which are priced lower than active-matrix 3D glasses and thus 4K resolution could invigorate the 3D category, Koenig says.

Koenig agrees that there’s no problem with the 4K category name being in flux. “Whatever we wind up calling it, the industry will get that sorted out,” he says.

The 4K value proposition is a more significant factor. Koenig points out that a technical standard and specifications are still works in progress, and that there are slight differences in pixel counts and other factors that will become essential when 4K content begins to flow. “Based on our research, content is a pre-requisite for market acceptance,” Koenig adds.

More Than 4K
Sony, which demonstrated a prototype of its new Crystal LED at CES, acknowledges that the system is still in development, and no distribution timetable has been set. Still Brian Siegel, vice president of television for Sony Electronics, focuses on the high resolution as the primary attraction in this next wave of TV sets.

“With Crystal LED, each pixel contains an LED for each of the red, green and blue color spectrums, a total of six million LEDs on the two million pixels of the prototype shown at CES,” Siegel explains. “What this means is that each pixel has a self-emitting light source, [which] is not the case with LCD screens,” he adds.

Despite the aggressive efforts to establish a home 4K presence, the road to 4K may be as demanding as the Olympic competitions themselves. The bandwidth needed to transmit 4K images will stress broadcast and cable channels initially. And video producers’ limited capabilites to create 4K content resemble the 3D dilemma of the past few years: an initial paucity of content, followed by a deluge of original content.

“It will be a challenge for broadcast channels to carry UHDTV, but at one time it was thought that digital HDTV was impossible,” observes Mark Richer, president of the Advanced Television Systems Committee (ATSC). He points out that NHK in Japan as well as the ITU are doing 4K transmission research, but he adds that it’s “not clear if UHDTV will be a priority for broadcasters or [if ] other services such as mobile DTV will be more important.”

Nonetheless, 4K technology is entering the TV market in a variety of ways.

“4K may be the greatest thing that happens to HD,” says Mark Schubin, an Emmy-winning TV engineer, who focuses on the evolution of production tactics. “At the tail end of the standard-definition era, producers were shooting with HD cameras and over-sampling. 4K cameras inherently over-sample, which makes it so much better looking even if you watch the show on a traditional HD set.”

Schubin, a long-time technical consultant to Lincoln Center’s Metropolitan Opera and an organizer of major Hollywood production technology programs, cites other 4K routes to market. Studios have been working on 4K for at least 10 years, he notes, with the expectation that it will emerge in digital cinema theaters.

“Now we’re in a new era where people have large screens and home theaters,” Schubin says. “4K is a differentiator.”

LG’s Alessi agrees, pointing out how his company is integrating “3D cinema, the smart TV platform and magic remote” (with gesture control and voice recognition) as part of the experience.

Mark Viken, vice president of marketing at Sharp Electronics Marketing Company of America expects a similar progression toward 4K. Sharp, which calls its technology ICC 4K, jointly developed its system with the I-cubed Research Center Inc. The display “presents a clearer, more life-like image” and “intelligently up-scales from HD to 4K [to] provide a real-viewing equivalent to the natural world,” Viken says.

“8K is scheduled to be demonstrated at high-profile public venues throughout 2012, including the Summer Olympics,” says Sharp’s Viken. “The dates for mass production of Sharp 8K products have not yet been determined, but will be timed with the introduction of 8K into the general marketplace.

In addition to the resolution improvements, video technologists are working on other display technologies to enliven the viewing experience. For example, quantum dots (QD), semiconductors with electronic characteristics tied to the size and shape of the individual crystal, are coming to TV displays. The British university research lab which developed the QD technology is working with Korean, Japanese and other TV set makers to create lower cost, energy-efficiency displays and other products possibly available within the next few years.

The scope of the “ultra” and beyond TV evolution is prompting organizations throughout the media, electronics and telecommunications infrastructure to rethink how TV will work. At Cable Television Laboratories (CableLabs), the cable industry’s non-profit research consortium, David Broberg, vice president of consumer video technology, points out that these high-bandwidth display technologies will benefit from future Internet Protocol delivery.

HEVC (High-Efficiency Video Coding) is a proposed video encoding technology being devised by the ITU and the Motion Picture Experts Group (MPEG) as the follow-up to H.264/MPEG 4 AVC (Advanced Video Coding) codec. Broberg adds that the new HEVC compression standards are well suited for 4K delivery, although they are not yet deployable.

“They promise the ability to deliver high-quality 4K content at bit rates being used today for 1080p content (five Mbps to six Mbps),” he says. Although limited 4K tests could take place using existing AVC coding (at rates between 10 Mbps and 20 Mbps) on existing infrastructure, Broberg expects, “It could take years before standards are sufficiently defined to make this widely available.”

That coincides with other predictions about the 4K timetable. As it was a decade ago for HD, the primary initial content source may be pre-recorded content. Blu-ray discs have the capacity to store a 4K movie, although studios have not yet decided if they will use that format.

The 4K rollout process is under review worldwide. NHK, the Japanese network that first demonstrated the format in 2003, plans to begin test broadcasts of UHDTV in 2020. The network first began exploring 4K in 2000. Meanwhile, ITU expects to issue its first draft standard for HEVC early this year, with a target for adoption by mid-2013.

Panasonic’s Chief Technology Officer Eisuke Tsuyazaki acknowledges the need to coordinate 4K display release with the availability of broadcast, cable, satellite or other transmission technology. He envisioned the initial installation of 4K displays for medical use as well as computer graphics and design.

“It’s going to be a while until 4K gets into living rooms,” Tsuyazaki said in published reports during CES. “It’s not a technical issue. The biggest issue is content.”

And that’s where the London Olympics telecasts play a key role. The limited public 4K displays will give viewers a preview of the stunning images awaiting them. The risk, as always in the CE industry, is that viewers will be so enticed by 4K that they decide to postpone purchases of currently available — and lower priced — OLED high-definition displays.

At the same time, the 4K demonstrations much like the other advanced visualization exhibits at CES, including Crystal LED, 8K and more, are reminders that there will always be something aspirational to watch: bigger, better and brighter.

For now, that’s what “ultra,” “super” and “extreme” mean for television.