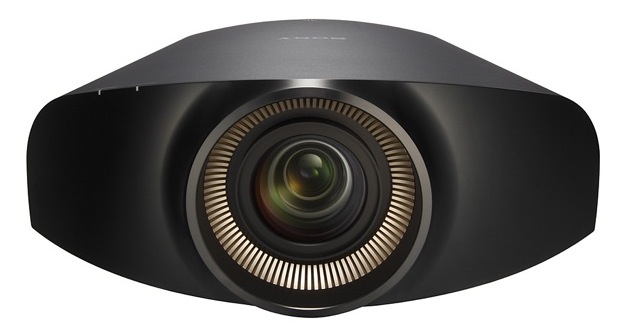 Sony announced their first home theater front projector capable of displaying 4K video. The top-of-the-line VPL-VW1000ES 4K home theater projector offers an entirely new 0.74-inch SXRD panel optimized for minimum light reflection. With over four times the resolution of 1080p, the new SXRD panel has further reduced the size of each pixel from 7µm to 4µm as well as the space between each pixel.

With 2,000 ANSI-lumens of brightness, the VPL-VW1000ES projector delivers nearly twice the output of previous Sony home theater projectors, making it suitable for screen sizes up to 200 inches diagonally. Sony claims the VW1000ES produces outstanding deep black levels, and when combined with Sony’s Iris3 technology, the projector can achieve an incredible 1,000,000:1 dynamic contrast.

The VPL-VW1000ES projector also features an exclusive 4K upscaler that dramatically enhances all content – SD or HD, 2D or 3D – allowing viewers to see 4K playback, even from their existing media libraries. For greater versatility, it can also display Full HD 3D movies, as well as 2D and 3D anamorphic films. For Full 4K 3D, a built-in IR transmitter drives the projector’s TDG-PJ1 active shutter 3D glasses. And it has picture position memory which memorizes the position of the zoom lens.

The performance and function of this 4K upscaled (which Sony calls “Reality Creation”) can be vastly improved by evolving the pattern classification, based on the statistical learning, using a wide variety of images in the Sony original super resolution algorithm, which has been developed and evolved over the decades. Furthermore, the super resolution 4K upscaler can deliver high definition, seamless and smooth 4K pictures by the dynamic control, based on the measurement and analysis of the input picture quality (noise, spectrum) and the processing of the super resolution, including the characteristics of the display device (4K projector).

The VW1000ES offers a variety of installation options, including dual triggers, a 2.1 motorized zoom, expanded throw distances, an RS232 interface, control over IP, and compatibility with virtually every home automation integrator.