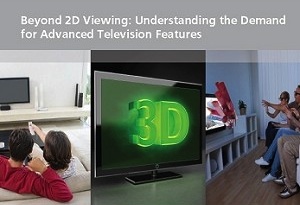 Consumers are seeking high-definition televisions (HDTVs) with the latest built-in features as a growing number of U.S. adults own smart app-enabled displays, according to new research from the Consumer Electronics Association (CEA). The study, Beyond 2D Viewing: Understanding the Demand for Advanced Television Features, examined whether current built-in television features, such as 3D and Internet-connected applications, are meeting the needs of consumers.

Consumers are using the built-in features on their HDTV at a high rate, with an increasing number gaining access to Web-enabled content directly through their televisions. More than one in five U.S. adults owns a smart app-enabled HDTV and almost all (90%) use the apps available on their displays in some capacity. In addition, more than four in ten HDTV owners connect their primary displays to the Internet, with 76% connecting at least one external device with smart app capabilities to their primary displays. Half of all HDTV owners connect a video game console or a DVD/Blu-ray player to their primary displays. Smart app users are most likely to stream video content from the Internet (61%), browse the Internet (56 percent) and view pictures (54 percent) using smart apps on their televisions.

Consumers are also looking for displays with built-in Wi-Fi and Internet browsing when purchasing a new HDTV, which trail only high-quality audio and video as the most important purchase factors of HDTVs. Approximately one in three consumers plans to purchase a new HDTV within the next 12 months.

Another way many consumers are experiencing Web-enabled content for HDTV is through a second screen on a portable connected device. Social networking is the most common activity on the second screen. Among HDTV owners who also own a tablet, two-thirds (67%) use their tablets for social networking while watching TV. Among HDTV owners who also own a smartphone, more than half (58%) are using a social network on that device while watching TV.

“We are living in an app-dominated world, whether it’s on your smartphone, tablet or television,” said Kevin Tillmann, senior research analyst at CEA. “Consumers want access to their apps at all times and they will use whatever device, TVs included, that offer the best and most convenient user experience.”

As 3D becomes a more common feature on HDTVs sold in the U.S., consumers have not only become more aware of the technology, but, according to the study, they are also beginning to embrace it. Today, 21% of U.S. homes own at least one 3D-enabled television. CEA’s most recent U.S. Consumer Electronics Sales and Forecast shows that unit sales of 3D televisions will reach an estimated 5.6 million in 2012, representing 18 percent of total TV sales, up from 8 percent of total TV sales in 2011. Nearly half (42%) of 3D-capable HDTV owners watch five or more hours of 3D content a week. By comparison, three-quarters (75%) of 3DTV owners watch more than five hours of 2D content on their 3DTV a week. However, one in ten (9%) report watching more than 15 hours of 3D content a week. Movies are the most common content source for viewing 3D, with nearly half (48 percent) of 3DTV owners having watched a 3D Blu-ray disc. Live programming (42%) and video games (30%) are also popular sources of 3D content. Overall, two-thirds (68%) of 3DTV owners rate the visual experience of 3D programming as excellent or good.

“Consumer interest in 3DTVs and 3D content continues to grow as ownership rates increase,” said Tillmann. “Continuing to expand and innovate with 3D content will be extremely important for future usage and will continue to drive sales.”