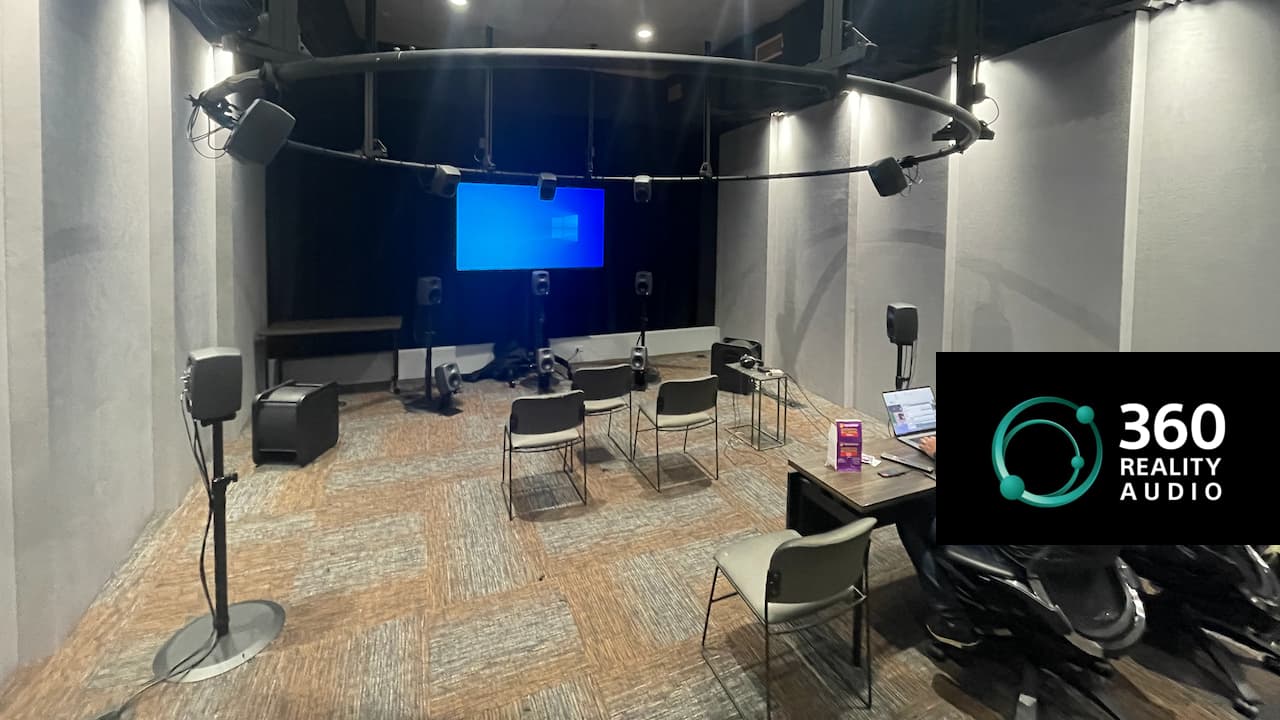 Why did I sit inside a 13 speaker sphere and what does it mean for you?

It started with an invitation to meet the team at Sony, who have developed a new audio format called Sony 360 Reality Audio. Like the name implies, it produces sound from all around you in 360-degrees. It’s somewhat like surround sound for movies that’s specifically designed for music, but much more.

What’s unique about Sony 360 Reality Audio (360RA for short) is that spatial cues (not just effects) can be heard through regular headphones. Wait, what? That doesn’t seem possible. How can regular stereo headphones suddenly sound like a surround sound speaker system? That’s what I was there to find out.

The Sony 360RA team welcomed me to Sony Pictures Studio in Los Angeles. After a short walk across the grounds, I was inside an acoustically treated screening room. Towards the front was a 13.2-channel speaker system* (13 speakers + 2 subwoofers). Behind the speakers was a table where an engineer sat with a laptop to orchestrate my demonstration. More people from the Sony team were behind them in a seating area.

I was on the hot seat.

I sat in the middle chair perfectly positioned between 13 speakers and 2 subwoofers. 9 speakers were directly in front of me — 3 on the floor, 3 at ear level slightly set back and 3 above those aligned with the floor speakers. Two subwoofers were positioned on the floor — one to each side of the left and right speakers which continued along a circular pattern. Angled slightly behind me were 4 rear speakers; two at ear level and two directly above them. All speakers were pointed directly at my head, and their overall placement outlined an invisible sphere. Needless to say I was in the sweet spot.

Hold on to your hats.

I was played two pop songs, with a short break between each song to discuss what I heard. Unfortunately, neither recording was public so Sony said I couldn’t reveal the tracks. One song was clearly recorded in a studio and the other live on stage at the Barclays Center in Brooklyn. I wasn’t played a stereo version of the same song for comparison, but I can tell you that what I heard was on a whole other level than anything I’ve heard before.

I felt like I was transported into the music. With the first track, I was on stage with the all the musicians playing around me. I wasn’t just hearing vocals, instruments or effects haphazardly. There was a focus to the mix, while at the same time depth, spaciousness and presence. I’m not sure how they did it, but the impact on the music wasn’t subtle. Spatial cues that you don’t get from even the best two-channel systems were present and I had an easy time placing things in the studio.

On the second track, I was front row center just below the stage at a rock concert. The soundstage noticeably shifted above me to mimic the live performance of an elevated stage. Once again, the music was lifelike. I felt like I was at the event, just beamed into the audience. In both cases, I was totally immersed in the music. I didn’t want the song to end. I wanted more.

I’ve heard surround sound music demos before. But never quite like this. What I heard was one of the most realistic presentations of pop music I can recall. The 360 surround effects weren’t just additive, they seemed natural. I never once wanted to turn my head around because I was surprised by a conspicuous sound around me. That’s a compliment to the engineers at Sony who were able to create a feeling of “being there” (with the music) that’s quite hard to explain until you hear it. With music presented this way, I don’t think I want to go back to stereo listening. Sony’s 360 Reality Audio is that big of a jump.

The next part of the demo transitioned to headphone listening. Could Sony transfer the same experience into headphones? Not special headphones, but the headphones like ones you probably already own.

Before that could happen, there was a setup procedure that was very unique. They had me place tiny microphones in each ear like an earbud. Then they ran a series of test tones from each speaker, like you’d hear when calibrating an A/V receiver. The same test tones were repeated with the headphones on. What I believe this measured was the exact time it took sound to reach each ear. According to Sony, even ear shape and size matters. With my hearing profile saved, the same two songs were played back through Sony headphones.

Although the music didn’t feel like the 1900 watts of power previously blast at me, all the same spatial queues and depth were there. The magic trick worked. Sounds were above me, behind me, up and to the right, below and to the left. The same 360 degree soundstage as before, but a far more intimate experience that would shake any core beliefs held by even seasoned audiophiles.

I wanted more, but my demo was over.

The reality of 360 Reality Audio is that you can experience it now with regular headphones via premium subscriptions to Tidal, Deezer, and nugs.net. You don’t even need headphone calibration either, although Sony does offer that on specific models.

The downside right now is there is not a lot of music to hear in this new format. We’ll have a lot more to say in future articles, including an upcoming podcast with some of the Sony team I just met.

Thank you Sony for the invitation. Very grateful. Beyond impressed!

Perhaps they brainwashed me, but I don’t want a stereo mix anymore. Once you’ve heard 360RA you don’t want to go back. It’s as big of a jump from mono to stereo. Sony calls it the future of music. I wholeheartedly agree.

CNN+ is Coming But Will It Change Cable News?

With declining cable/satellite viewership and increased competition from Fox News, MSNBC, and other news channels, CNN+ is a bold step to right the ship.

Netflix Expands into Gaming for 2022

Netflix expands into gaming and we have more than a few questions about this risky move planned for launch in 2022. Your move Disney+.