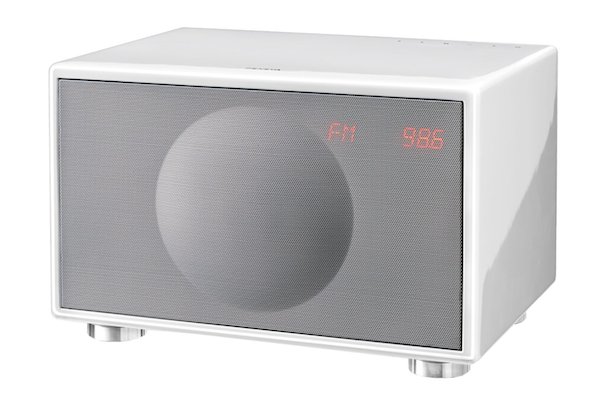 The M Wireless is a great looking, feature packed Bluetooth speaker that falls short of expectations 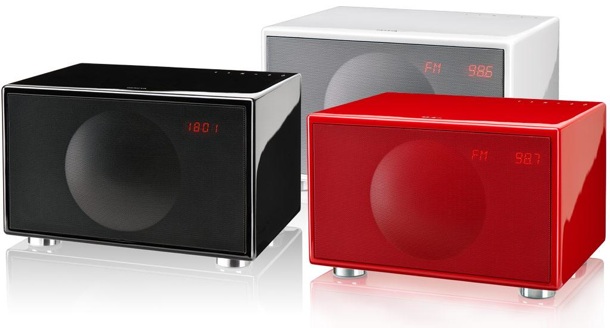 The Geneva Model M Wireless is a $600 table-top speaker designed for listening directly from your iPhone or smartphone that is Bluetooth enabled. Unlike others in its class, the wireless speaker also includes a remote control, FM radio, alarm clock, and DAB+ for European digital radio listing. The Model M Wireless comes in four colors — white, red, black and walnut. I received the white one, which is superbly finished and looks exquisite in any modern setting. I tested it on my open space kitchen counter, though it is small enough to be placed on a bookshelf or nightstand.

Background
The Model M Wireless is the latest version of Geneva’s Model M, and Model M +CD, which provide 30-pin iPod docking in lieu of streaming. All M models use the same size internal speaker drivers, but Geneva tweaked the drivers and switched to lower powered amplifiers on the M Wireless. Geneva’s published specifications state M Wireless uses four internal Class AB amps with a total of 60 watt RMS output power, while older M models went with four Class D amps totaling 100 watts. I wanted to point that out because my review may not represent the sound quality of the older speaker docks.

Geneva’s Managing Director, Chuck Vath, said “Output actually had to be dampened somewhat so that the drivers wouldn’t be overloaded. For the new versions we were able to source amplifiers that were perfectly matched to the speakers. So even though the power specs appear different, the new version plays every bit as loudly as the previous edition.” 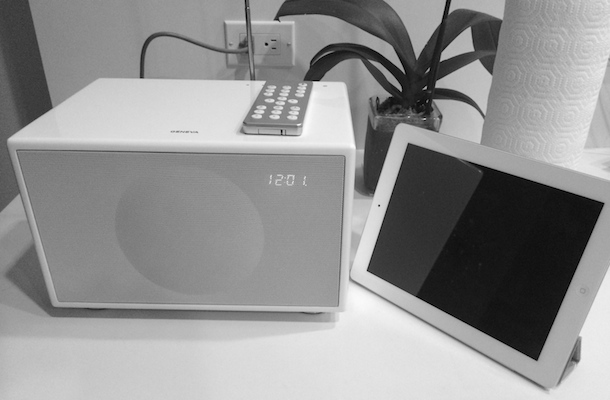 Getting Started
Setup was relatively straight forward. I skipped the manual, plugged it in and hit power on. Pressing the “Bluetooth” button on the remote simultaneously initiated pairing and switched modes. “GENEVA M” then appeared in my iPhone’s Bluetooth settings. One more tap to connect and you’re done. Pairing takes about a minute, and you’ll know it’s working when the letters “S”, “P”, and “C” start appearing on the speaker’s digital display. I assume those letters stand for searching, pairing, and connected. When pairing is complete, the iPhone will say “Connected” and you can begin streaming your music.

Inherent limitations of Bluetooth 2.1 prevent two or more devices to be paired at the same time. Pairing a second device was only possible once the first paired device was turned-off or out-of-range. The last paired device always took precedence, and the Geneva speaker will always look for it first. That functionality could be considered a feature if you have just one device, or a drawback if you have a lot of devices laying around the house, because you may have to hunt down what was last paired to get the one you want to work.

Music Listening
I had high hopes for sonic bliss, since many other Geneva speakers had received rave reviews. But perhaps my expectations were a bit too high for such a small speaker. What I discovered was a bottom-end that was almost nonexistent at low volumes to bass that struggled to find consistency or depth at higher volumes. On the plus side, the M Wireless can play very loud and if a track is not too bass heavy can sound clear and crisp. I’d give it strong marks for handling male and female vocals, but I kept feeling there was something missing the more I listened. Although, despite its small footprint, the speaker can easily fill a room with sound. 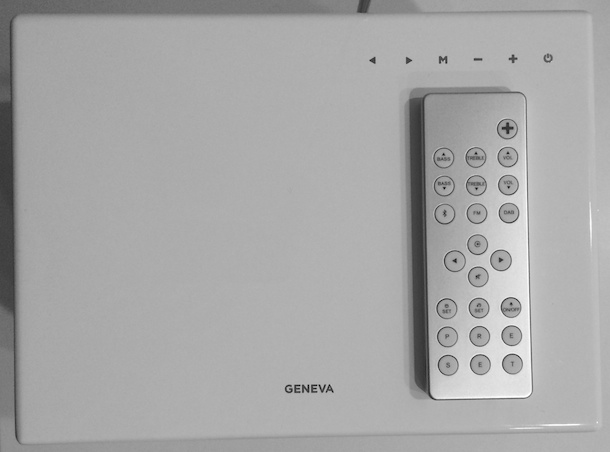 Features & Usability
The M Wireless is loaded with extras such as a digital clock with alarm, FM radio, DAB+ and remote control. Unfortunately for me, more features meant added complexity. Meanwhile questionable design decisions further impeded usability. For starters, the remote was nice to have, but included a lot of buttons only needed for radio listening. More confusing though was Geneva’s use of the “plus” (+) symbol for two different uses. On the remote, plus (+) means power-on, but on the speaker itself (see top buttons) it’s for volume-up. Second, a non-intuitive “M” button on the top is used to cycle through its modes — bLUE, LinE, FM — that appear with that odd letter casing. Finally the line-in (activate) button is near impossible to figure out from the remote. Take a guess? It’s the circled left arrow in the middle.

The alarm clock feature is available, but I found little reason to use it. There is no battery fail-safe in case of a power outage, and the clock will lose time whenever its unplugged. Second, setting the clock takes a keen eye to know what is AM or PM, as the difference is represented by a single dot next to the last digit, which is very easy to miss.

FM radio is convenient, but the large metal antenna detracts from its aesthetics. I was only able to pick-up a half-dozen local radio stations, and sound quality was even less detailed than listening over Bluetooth. Perhaps bad reception in my home was to blame, though I didn’t extensively test the radio as I don’t think it would be a main purchasing factor. However, European customers might appreciate its DAB+ capability.

The Model M Wireless has no dock or USB ports so there isn’t any docking or charging capabilities. Smartphone or tablet listening is only possible via Bluetooth or a cabled “Line-in” connection via the headphone jack. However, I was pleasantly surprised Geneva included a 3.5mm stereo headphone cable in the box.

Conclusion
Overall, the Geneva M Wireless is an average sounding wireless speaker, that doesn’t live up to its high price point. Although it passes the wife acceptance factor with flying colors, its usability quirks and lackluster sound make it hard for me to recommend for the price.