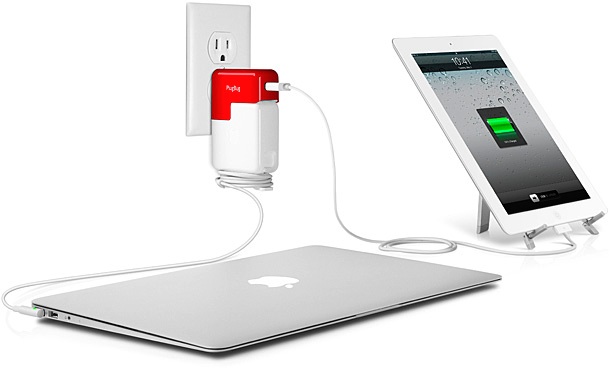 Twelve South introduced PlugBug, an iPad/iPhone wall charger that piggybacks onto a MacBook Power Adapter, allowing you to charge a MacBook and an iPad/iPhone simultaneously from one power outlet.

The ingenious PlugBug connects to all MacBook Power Adapters. Simply snap PlugBug onto a MacBook Power Adapter, in place of the adapter’s AC plug, and you now have one handy device that charges MacBook and iPad or iPhone at the same time, using only one wall outlet. This can be a real lifesaver when you need to charge both before a meeting or — even more stressful — between connecting flights with only one outlet available.

Along with a beautiful design, PlugBug packs 10 powerful watts, charging iPad as fast as technically possible. In fact, many public USB charging stations, like those found in airports, lack the power to charge an iPad. Not only will PlugBug provide the proper charge, it will charge your iPad up to twice as fast as many competing chargers.

Now you can carry just one compact PlugBug to charge your iPad or iPhone and leave the other chargers at home, reducing the clutter in your computer bag. Forget about worrying whether or not you remembered your iPad charger — with PlugBug it’s always connected to your MacBook charger. For those times when you only need an iPad charger, you can disconnect PlugBug from your MacBook Power Adapter and still use it as a stand alone device.

Those outside the U.S. and Canada can use PlugBug as the perfect U.S. adapter and iPad/iPhone charger. Not only does PlugBug convert any non-U.S. MacBook Power Adapter into a North American-compatible adapter, it also serves as a bonus USB charger for iPad and iPhone.

Price and Availability
The PlugBug is available now at twelvesouth.com for $34.99.