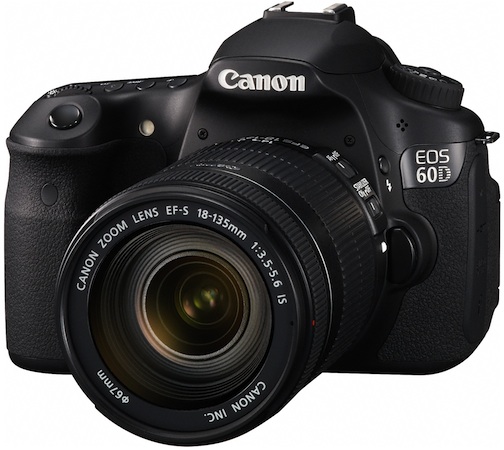 Canon today announced the new 18-megapixel EOS 60D Digital SLR Camera. For the first time on an EOS camera, the EOS 60D DSLR boasts a three-inch Vari-Angle Clear View LCD screen, EOS Full HD video recording with manual overrides including audio level control, and in-camera functionality for RAW image processing plus Creative Filters to manipulate images after taking them. Designed primarily for advanced amateurs, the EOS 60D replaces the EOS 50D and boasts a broad array of new features that make it easier for photographers to add personal creativity to their images. Whether it's capturing an overhead shot on the Vari-Angle screen at a graduation ceremony, or converting a color image to black and white for a nostalgic look, Canon is delivering in-camera features and functions that empower advanced photographers to capture, display and print the images they want.

In-camera processing of RAW image files
Canon's new EOS 60D gives advanced photographers an edge with new in-camera features that enable users to enhance their images without a computer even after they have been shot. For the first time ever in an EOS camera, the EOS 60D features in-camera processing of RAW image files, new reduced resolution image copies, and post-processing creative image filters for exceptional flexibility in digital image rendering.

Each of these filters can be applied to a captured still image in-camera to create a second “filtered” JPEG version, leaving the original RAW or JPEG file unaffected.

Full HD Video
In addition to its new still capture capabilities, the EOS 60D features Full HD video capture at 1920 x 1080 resolution with selectable frame rates of 24p, 25p or 30p. Native 24p recording helps videographers achieve a more cinema-style look for their footage without the need for post-processing. The EOS 60D builds upon the great video capabilities Canon has introduced in recent DSLR cameras and packs them into a camera photo enthusiasts will love. Full HD video capture, along with selectable cinematic frame rates for both NTSC (National Television System Committee) and PAL (Phase Altering Line) standards, will help the EOS 60D to be the camera of choice among film students and photography students alike.

The new EOS 60D camera's movie mode also includes manual controls for exposure as well as manual audio levels in 64 steps, much like the latest firmware update for the EOS 5D Mark II HD-SLR. Users can set audio levels on the rear menu screen before shooting begins; once recording is initialized, audio adjustments are not possible. In addition, Canon has added an electronic Wind Filter to the audio controls within the movie shooting menu.

Canon has also included an in-camera movie editing feature, allowing users to shorten a video file by clipping segments from the beginning or the end, removing unwanted portions without outside software. This feature can dramatically accelerate workflow by reducing the time needed to upload video clips to a computer for further editing and assembly. The EOS 60D also includes Canon's Movie Crop mode, which allows users to achieve 7x magnification when shooting SD video. Unlike the digital zoom feature found in many compact digital cameras, Canon's Movie Crop mode crops the image directly from the CMOS sensor at full SD resolution to preserve image quality and still provide additional telephoto power.

Providing access to the right lens for any given shooting scenario, the EOS 60D DSLR camera is compatible with more than 60 Canon EF and EF-S lenses. The EOS 60D DSLR's video functions are supported by two key proprietary Canon technologies, a DIGIC 4 Imaging Processor and a large APS-C–sized CMOS sensor capturing fine detail and color with an amazing cinematic depth of field. The Canon EOS 60D allows for three video recording modes — Full HD and HD in a 16:9 aspect ratio and Standard Definition (SD) in a 4:3 aspect ratio, all at selectable frame rates. The EOS 60D Digital SLR camera will record Full HD at 1920 x 1080 pixels in selectable frame rates of 24p (23.976), 25p, or 30p (29.97); 720p HD recording at 50p or 60p (59.94) and SD video at frame rates of 50p or 60p (59.94). The EOS 60D features a dedicated button to initiate live view for both video and still shooting. Once engaged, the same dedicated button will start and stop video recording.

The 9-point AF system on the new EOS 60D features f/5.6-sensitive cross-type focusing on all nine focusing points. Like the EOS 7D, the center AF point is a hybrid of standard cross-type and special diagonally-shaped “X” cross, with high-precision sensitivity for f/2.8 and larger aperture lenses. Complementing the AF system, Canon's iFCL metering system, identical to that on the EOS 7D and Rebel T2i, takes color information into account and includes a 63-zone dual-layer metering sensor that reads both illumination and color for consistent results in all lighting conditions, keeping exposure levels stable from shot to shot, even as the light source changes.

Photographers will enjoy shooting in low light thanks to the EOS 60D DSLR's wide ISO range from 100-6400 (adjustable in 1/3-step increments from ISO 100-6400 and expandable to 12,800) allowing it to capture beautiful images without flash during family milestone events such as wedding ceremonies, while still being equipped with a built-in pop-up flash for shooting the cake cutting ceremony and reception. The EOS 60D's pop-up flash features a built-in Integrated Speedlite Transmitter for control of up to two groups of off-camera EOS Speedlites without the need for an external transmitter, providing an economical solution for multi-flash shoots. 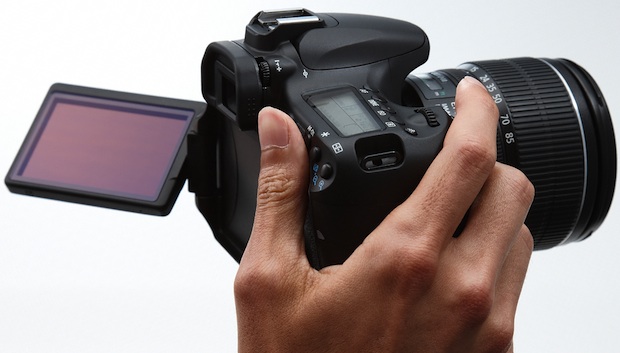 Making accurate composition more convenient, the EOS 60D's optical viewfinder provides 96 percent coverage along with Canon's built-in single axis Electronic Level Display, which utilizes the exposure level scale below the picture area to let the photographer know when the camera is level. The Electronic Level Display is also visible on the camera's LCD screen in both Live View and Movie modes. An artificial horizon display illustrates horizontal roll, allowing the photographer to know when the camera is in a fixed level position. The entire camera has been durability-tested to 100,000 exposures making the EOS 60D a reliable as well as a powerful imaging tool.

Pricing and Availability
The Canon EOS 60D Digital SLR camera will be available toward the end of September in two configurations:

The Canon BG-E9 battery grip will also be available in September for $270.

What Digital Camera10 years ago