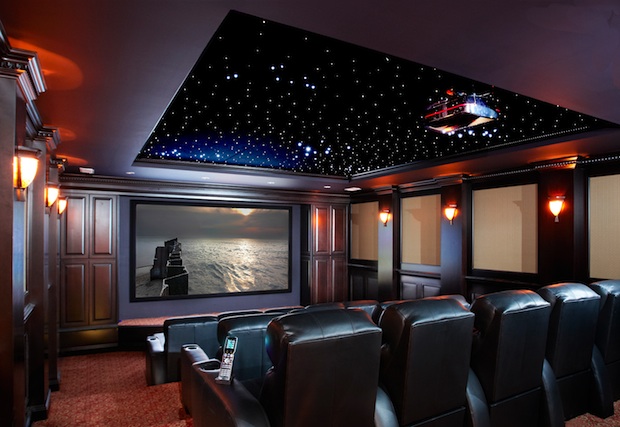 While you can spend tens of thousands of dollars on building a custom home theater with elaborate retro decor and lighting, what most people want in the end is a clear, high-definition big-screen image, enveloping high fidelity surround sound and comfortable seating. Given the trying financial times, there are ways to save thousands of dollars and still come out with a home theater that will thrill your family and friends.

Here’s my list of economical tips to building a home theater on a limited budget:

Save on your projection screen by building your own, using Goo Systems’ Screen Goo, a highly reflective acrylic paint that requires two coats and runs about $150 or so, a fraction of what conventional screens cost. Build your own frame with a baseboard material on which the Screen Goo is applied and the total cost of an 8-foot-wide screen can be held to $350. In tests conducted by ProjectorCentral.com, the Goo Systems screen came very close to screens costing thousands. In a Screen Goo demo I viewed at the Consumer Electronics Show, I was impressed by the image quality. The basic white will be the best option/best value for most home theater builders.

Splurge on the video projector, but consider that hi-def video projector prices have come down dramatically in recent years. Projectors capable of 1080p image clarity (the Blu-ray standard), which some years ago would have cost $4,000 are now available for $1,000 to $1,500. While I used to unhesitatingly recommend models such as Panasonic’s AE4000 for $2,000, outstanding image quality can be had for as little as $933 for the Optoma HD20, a model I’ve liked in demos, as well as from brands like Mitsubishi and Epson, both of which sell for less than $1,500. If you want all the bells and whistles, you may need to pay $2,000, but you need to think about your requirements. A totally dark room yields the most impressive big-screen image, but if ambient light is a factor, you may want a model with maximum brightness. Check out the projector ratings at projectorcentral.com or the latest projector news and reviews here.

Save on your speaker cables and other connectors, including HDMI and coaxial cables. Copper is copper and claims of improved sound or video quality from high-priced cable manufacturers are not supported by scientific evidence. Get thicker-gauge speaker cable such as AWG12 (the lower the number, the thicker the cable) for longer runs over 25 feet; AWG14 is fine for shorter cables. Buy it in bulk or measure very carefully because you always end up needing more cable than you think.

Splurge on your loudspeakers because good engineering from speaker companies with a long history of specializing in high-fidelity speakers and home theater surround sound systems counts a lot more than the home theater-in-a-box manufacturers whose price-is-everything approach may initially be seductive but whose sound quality is woefully inadequate.

That doesn’t mean you have to pay outlandish prices for thrilling sound quality. Consider the size of the home theater you’re building. For rooms measuring 2,500 cu. ft or less (length x width x height), you can get wonderful sound quality using compact bookshelf-size front speakers such as Axiom Audio M22’s and a good subwoofer like the Axiom EP350. Combine those with a pair of QS8 multi-directional surround speakers and a VP150 center channel, and you’ll achieve stunning high-fidelity surround sound for movies or music for less than $2200. If you have a larger room, you’ll need larger floor standing front speakers, center, and a bigger subwoofer (the self-amplified speaker for very deep bass and effect in movies), such as Axiom’s Epic 80 – 500 system, for $3418. These prices are for 5.1-channel surround systems. The sonic enhancement of two extra surround channel speakers (a total of four in a 7.1-channel system) is most obvious in larger rooms, where better coverage is achieved.

Save on your media. While the impulse to collect is dominant in lots of enthusiasts, you can save hundreds, even thousands, by resisting buying Blu-ray and DVD movies. Virtually all cable suppliers and satellite services offer HD movies, either on demand or in subscription packages, and while those are mostly 720p or 1080i, which I hasten to emphasize is authentic high-definition, the difference between a 720p hi-def movie and a 1080p Blu-ray disc is not dramatic. On-line disc-rental services are enormously convenient and inexpensive and high-quality Blu-ray/DVD players cost as little as $100.

Splurge on your seating but ignore expensive and often misguided “room treatment” devices and services. A normal mix of absorbent and reflective surfaces found in domestic rooms — carpet or rugs on the floor, upholstered furniture, and a few knick-knacks or shelving to break up sound reflections (even decorative fabric wall hangings and curtains are highly effective absorbers) — are all the “room treatments” most home theater rooms require. And of course you want to be comfortable, so seating or recliners of some type should reflect those demands.

Finally, in building a home theater, look for audio/video receivers with power output typically rated in the range of 80 to 100 watts per channel, which in most average-sized rooms will yield sound loud enough and clean enough for most listeners without going “over the top” into ear-damaging territory. Extremely loud playback can be briefly thrilling, but long-term abuse will catch up to you, so keep peak playback levels to about 80 to 85 dB SPL (that’s termed “quite loud” by most listeners) to preserve your hearing into old age. Brands? My favorites for overall quality and clean sound include Denon, Harman/Kardon, Pioneer, Sherwood Newcastle, and NAD, to mention a few. It’s smart to buy in the mid-to-upper range of those brands. Entry-level receivers may seem like a bargain but will lack features that enable future expansion, such as the ability to add separate power amplifiers. For larger than average home theater rooms, “great rooms” and the like, you may have to add extra power amplifiers for clean distortion-free playback.

Let’s face it: we’re all spending more time at home these days, so spending a few dollars to make it the house of your dreams just makes sense. Now that you know where to save and where to splurge, you’ll look like the guy ‘in the know’ when you’re building your home theater.