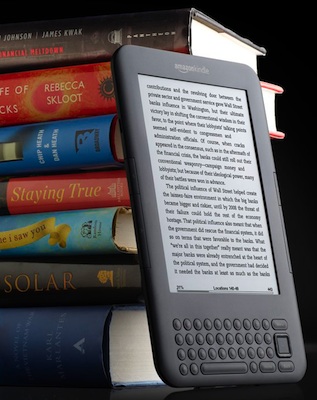 "Customers are now choosing Kindle books more often than print books. We had high hopes that this would happen eventually, but we never imagined it would happen this quickly — we've been selling print books for 15 years and Kindle books for less than four years," said Jeff Bezos, Founder and CEO, Amazon.com. "In addition, we're excited by the response to Kindle with Special Offers for only $114, which has quickly become the bestselling member of the Kindle family. We continue to receive positive comments from customers on the low $114 price and the money-saving special offers. We're grateful to our customers for continuing to make Kindle the bestselling e-reader in the world and the Kindle Store the most popular e-bookstore in the world."

Recent milestones for Kindle include:

All Kindle Books let you "Buy Once, Read Everywhere" — on all generation Kindles, as well as on the largest number of devices and platforms, including iPad, iPod touch, iPhone, Mac, PC, BlackBerry, Windows Phone, Android-based devices, and soon HP TouchPads and BlackBerry PlayBooks. Amazon's Whispersync technology syncs your place across devices, so you can pick up where you left off. With Kindle Worry-Free Archive, books you purchase from the Kindle Store are automatically backed up online in your Kindle library on Amazon, where they can be re-downloaded wirelessly for free, anytime.