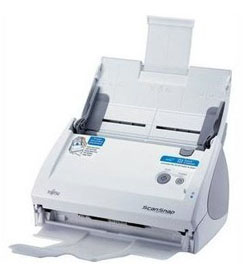 To be fair, this is not just any scanner. It’s a Fujitsu ScanSnap S500. (Actually, mine is the ScanSnap S500M (Mac Version.) And, this particular package of hardware and software offers a “one-button” solution for scanning both sides of a document and creating an automatically named Adobe Acrobat (.pdf) file. It is so inexpensive (approximately $300-$400 depending on where you buy it) and so fast, 18 pages per minute (faster if you scan in black and white) that I am sure that everyone who receives more than 25 pieces of mail each day will have to own something like it very soon.

First, multi-page duplex scanners are not new. They have been around for years. And, to be more than fair, many units from HP, Xerox, Brother and others have come bundled with Acrobat for all of that time. What makes this particular scanner interesting and worthy of note is the fact that it is unbelievably cheep and it works like a monster!

Let’s review: In the years 0 to 49 B.S. (Before Scanner), I opened my mail over the garbage can. I learned this behavior from my parents who used to file junk mail in the “circular file” as soon as it arrived. Important mail got stamped with a 1970s vintage “received” stamp, that had a nifty set of thumbwheels to set the date, and was then handed to a staff member for appropriate routing. Bills were taken to accounts payable, Checks to accounts receivable, letters, invitations, etc. all to the appropriate places. These documents were put in piles and routed by hand. It is a highly evolved system that, for most small businesses and home offices, has remained unchanged since the 18th Century.

After a piece of paper had served it purpose, it was placed in the “To Be Filed” pile that we all know too well. What happened after that was anyone’s guess. In my offices, that pile had many of the attributes of a Black Hole. If you dug deep enough, I’m pretty sure you could have found Jimmy Hoffa and the house keys that your Aunt Ethel borrowed 20 years ago.

Our file cabinets and associated system have always been a thing to behold. Since filing in my company was done primarily by entry-level employees and interns, finding things that were filed was always an adventure. You know, Apple starts with A, but it’s a fruit so it was filed under F, but it’s also a computer company (was a computer company, now it’s just Apple) so it belongs in C. Ugh!

A.S. (After Scanner). I still open my mail over the garbage can. Some behaviors are unchangeable! However, now — everything that is going to be kept gets scanned the moment it is opened. If the original needs to be kept and routed, the .pdf file is annotated in Acrobat and the document gets notated as well. Every document is processed by Acrobat (or a third party’s) Optical Character Reading (OCR) software so it becomes text searchable and it is filed in the appropriate computer file folder. We do have a new pile of papers in the office, it’s called “To Be Scanned.” What a difference this technology makes.

First, the amount of paper that we actually keep is extremely small. The impact on my desk alone has been mind-boggling. I’m talking about feet of paper gone forever, not inches.

Another new behavior is the reorganization of the file folders on our servers and personal computers. Now, we have a hierarchical filing system of nested folders. It is a pleasure. And, if you can’t find something, you simply type some keywords into the search box and in seconds every document that matches the search criterion shows up. Files names notwithstanding. So if the Apple invoice is filed under C for computer, it will show up when you search Apple. Big fun indeed! We have also instituted a highly religious on and off premises back-up system. Since every important document is now a computer file, we must make sure that the data is protected everyday. As you can imagine, there are dozens of opportunities for new service businesses and software companies in this paragraph alone.

Now, let’s count the behaviors that have gone extinct.

Why should you care that I have purchased a scanner and why do I think it will affect the way you do life? 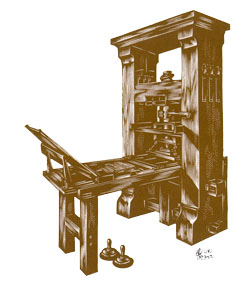 Remember, the movable-type printing press was invented in the West by Gutenberg in the last few decades of the 16th Century (I have to qualify this because the Chinese had clay movable-type printing presses several thousand years ago, but we Westerners seem to ignore that fact.) If he was so inclined, circa 1585, Mr. Gutenberg could have sent a personalized letter to everyone who lived in the Rhine River Valley to advertise his favorite Bierhaus. Of course, it would have taken him about 10 years working night and day to accomplish this mission, but the technology existed. Thankfully for Mr. Gutenburg, Mr. Sears did not invent junk mail (as we know it) until the early decades of the 20th Century. And even he could not personalize your junk mail economically until the advent of high-speed laser printers in the 1960s.

Cheap technology not only makes things easier, it makes things more accessible. In three years we will have gone through several generations of high-speed, low-cost scanners. This technology is going to change the way we do business as profoundly as fax machines and email before it. Don’t think of it as a “paperless office,” think of it as another type of digital asset management.