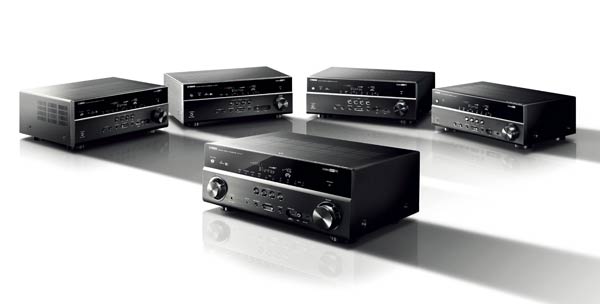 The top model, the RX-V777BT, is packaged with a Bluetooth wireless technology adapter for connectivity to yet another group of popular devices which contain personal music libraries. It also offers advanced features such as HDMI Zone B that supplies an additional HDMI audio and video feed to another room. The company’s proprietary YPAO R.S.C. with multipoint measurement calibrates the listening area for superior sound at every seating position. (The RX-V677 offers YPAO R.S.C.) The RX-V777BT also provides six HDMI inputs (including one that is MHL-compatible on the front panel) and two outputs with 4K 50/60p video upscaling. (The RX-V677 has one HDMI output.)

The RX-V777BT and RX-V677 add SiriusXM Internet Radio and Rhapsody music streaming to the list of sources. Both models include YPAO Volume which delivers full natural sound from movies and music – even at low volumes, and feature the latest HDMI version.

The RX-V577 enables great flexibility with Zone B speaker and dual subwoofer outputs. The RX-V577 and RX-V477 both have six HDMI inputs and one output with 4K Ultra HD pass-through, 3D and Audio Return Channel, as well as discrete amp configuration and 192 kHz/24-bit Burr-Brown DACs for all channels.

Like the recently announced RX-V377 5.1-channel AV receiver, the rest of the RX-V Series features Yamaha’s exclusive Extra Bass low-range enhancement technology that delivers richer bass while maintaining exceptional sound imaging and balance from subwoofers and speakers of any size.

As with the 2013 line, each model includes AirPlay, Internet radio (vTuner) and access to Pandora music streaming services, as well as the top consumer rated Yamaha AV Controller App for Apple iOS and Android devices.

The Yamaha RX-V 77 Series network AV receivers will be available at the following dates and prices:

Compare all each receiver’s specifications at yamaha.com.

Reference Home Theater7 years ago
Advertisement. Scroll to continue reading.
You Are Here