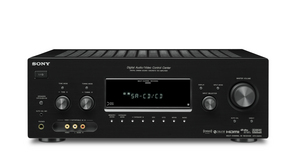 The receivers provide full HD features from 1080p performance with smooth video switching to simple surround sound set-up, along with the ability to receive XM Radio satellite programming. Using the receivers’ HDMI™ connections, they become great conduits between the content source and the HD display. They are ideal for 1080p high-definition equipment like Sony’s Blu-ray Disc playes and BRAVIA flat LCD televisions.

The company also announced a new line of accessories, offering connection options for such advanced functions as wireless Bluetooth and network connectivity.

“We have incorporated HD video and audio into receivers that are sure to impress consumers,” said Jeff Goldstein, vice president of marketing for Sony Electronics’ Home Products Division.

Sony’s new Digital Media Port™ adds to the connectivity options with wireless Bluetooth enabled devices, WiFi and other ways to simply connect music sources. Once this accessory is connected, the device is powered and controlled by the receiver.

The receivers also include BRAVIA™ Theater Sync, integrating their operation with a compatible BRAVIA television or video source like Sony’s BDP-S300 Blu-ray Disc™ player over HDMI. With the touch of a button, you can turn on and switch inputs of connected devices automatically.

Additionally, Digital Cinema Auto Calibration is included, simplifying multi-channel surround sound setup with the use of a microphone for a balanced home theater experience.

Finally, the receivers offer a Portable Audio Enhancer. Plug any digital music player into the receiver and improve its clarity and depth by adding information to the audio signal that had been removed during compression.

The STR-DG910 7.1 channel A/V receiver has 110 watts of power per channel, offers on-screen set-up and is XM Connect-and-Play™ ready. The model will be available in April for about $500.

The STR-DG710 and STR-DG810 models are 6.1 channel receivers offering 105 and 110 watts of power per channel and are XM Connect-and-Play ready. Both will be available in March for about $300 and $400, respectively.

The STR-DG510 receiver will be available in March for about $200.

The models require the purchase of an XM Connect-and-Play antenna for listening to satellite radio in the home. Once you connect the antenna and subscribe to the service, you can navigate XM stations displayed on the front panel.

Also debuting are four accessories for the Digital Media Port, including a Bluetooth audio adapter to accept audio from enabled devices, a wireless network audio adapter for wireless streaming of music from a PC, and cradles for select Network Walkman and iPod digital music players.

The cradle supports the units’ audio and video playback capabilities with onscreen navigation.

The A/V receivers and accessories will be available through sonystyle.com at Sony Style retail stores and at authorized dealers nationwide.