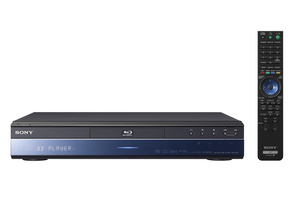 The BDP-S300 is expected to broaden the high-definition disc player market while delivering new features including the advanced Dolby Digital Plus audio codec as well as BRAVIA Theatre Sync™ and CD playback.

“The BD format gained great momentum in the past several months, and we’re going to capitalize on that with the new model,” said Chris Fawcett, vice president of marketing for Sony Electronics’ Home Product Division. “The player gives a broader consumer segment the opportunity to experience the exceptional quality of Blu-ray Disc format at a competitive price.”

For those who own an HDTV set without HDMI, an analog component output for 1080i (interlaced) is available as well.

The new BD player is compatible with most standard DVDs and has the added feature of 1080p upscaling through HDMI to 1080p capable HDTVs, improving the picture performance of existing DVD libraries.

The new BD unit incorporates BRAVIA TheatreSync utilizing HDMI connectivity, which integrates the operation of the player with a compatible BRAVIA flat-panel LCD television or audio/video receiver. With the touch of a button, you can automatically turn on and switch inputs to match connected devices.

Additionally, the player offers multi-channel linear PCM digital audio output via HDMI, and can decode Dolby Digital Plus, providing optimum surround sound to an appropriately equipped receiver. The unit has optical and coaxial digital audio out, along with 5.1 channel decoding capability for backward compatibility with existing receivers.

The BDP-S300 joins Sony’s family of full HD 1080 line of products, spanning from the original BDP-S1 BD player, now with a list price of $799, to BRAVIA flat-panel LCD, and 3LCD and SXRD rear-projection television line, as well as the PlayStation 3 game console, PC drives and recordable BD media.

The company additionally announced a new free firmware update for the BDP-S1 that allows it to decode Dolby Digital Plus & Dolby True HD audio codecs. The update will be available next week for download at www.sony.com/blurayupdate.

The new BDP-S300 player will be available shortly at Sony Style stores, online at the new sonystyle.com and at other retailers nationwide.