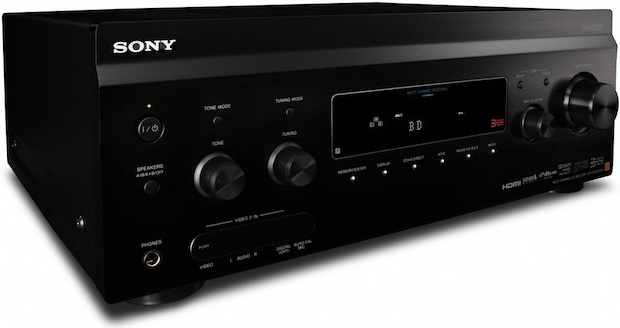 The new models offer 3D pass-through and flexible multi-room features. They can connect to a home broadband network through an Ethernet port offering easy access to digital photos, music and videos from Digital Life Network Alliance (DLNA®) sources. They also function as an Ethernet hub featuring four ports that connect other network devices.

Additionally, the Ethernet connection provides access to both Shoutcast® Internet Radio and Rhapsody® Music Service, and offers easy access to firmware upgrades via the Internet. The STR-DA5600ES model also functions as a DLNA Live Audio Server that can stream music to other DLNA clients.

Users with an iPhone® or iPod® touch device can control the models using a free app that transforms your mobile device into a full ES receiver remote. The app features zone control, full GUI menu, and Sony's Quick Click remote function which allows users to control source components (such as Blu-Ray player, set-top box) in the main home theater room to be controlled from a second zone.

The STR-DA5600ES and the STR-DA4600ES offer the ability to distribute audio and video to multiple rooms via the second HDMI output and video to a second zone via CAT5 output. They can both also up-scale all sources to 1080p in the main zone and 1080i in a second zone via the Faroudja chip® ensuring a consistent, sharp picture. The connected video zones feature a high-grade, icon-driven menu system that allows for simple device and content navigation.

All three models feature Digital Cinema Auto Calibration (DCAC) with Automatic Phase Matching (APM). Without changing the front reference speakers, APM corrects for phase differentiation between front, center, and surround speakers, ensuring an ideal sound stage regardless of speaker type. The STR-DA5600ES also offers DCAC EX which includes speaker relocation, not only adjusting for the distance but also the angle of the listening position to create an optimal listening environment.

The receivers also feature Sony's innovative new HD Digital Cinema Sound® that was developed together with Sony Pictures Entertainment. Incorporating high-mounted front speaker placement, HD DCS was designed to transform and replicate both the sound quality and acoustics of a movie theater in the home environment creating an unmatched home theater experience.

The models feature Sony's Digital Media Port for simple connection to an iPod and other digital music players, and are both XM® and Sirius® ready.