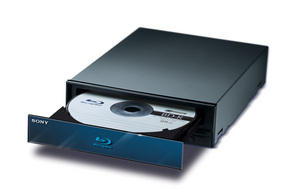 The new BWU-200S model cuts BD-R burning time by half compared to the first generation model, allowing for a full 50GB BD-R disc to be recorded in about 45 minutes. It also features improved DVD burning speeds, making it a multi-format combo burner that eliminates the need for more than one drive in a system.

The drive comes with CyberLink BD Solution software that provides a comprehensive application for capturing, authoring, editing, burning and viewing high-definition personal content captured in the native HDV 1080i format from an HDV camcorder. In addition, the software supports recording on DVDs and CDs, as well as playback of DVDs recorded in the AVCHD format.

The BWU-200S drive can record up to 50GB of data for random access storage and backup on BD-R (write once) or BD-RE (rewritable) discs, or up to 230 minutes of high-definition HDV 1080i video on a BD-R/RE 50GB disc. It also supports recording on standard single layer 4.7GB DVD+R/+RW/RAM discs, 8.5GB DVD+R double/dual layer discs, and CDs.

The new drive is supported by Adobe Encore CS3 that now comes bundled with Adobe Premiere Pro CS3 software, providing video production professionals with another option for outputting high-definition video on a Blu-ray Disc with MPEG-2 or H.264 compression.

“Advanced optical storage technologies, such as Blu-ray Disc technology with its vast capacity compared to DVD technology, will be key enablers for next generation PC applications like HD personal video content and high-definition TV recording,” said Wolfgang Schlichting, research director for removable storage at IDC. “Sony’s many innovations in optical storage have prepared the company to be a leader in the Blu-ray Disc writable market.”

Availability and Pricing
The BWU-200S drive will be available directly from Sony at sonystyle.com next month for about $600. Pre-orders are now being accepted.