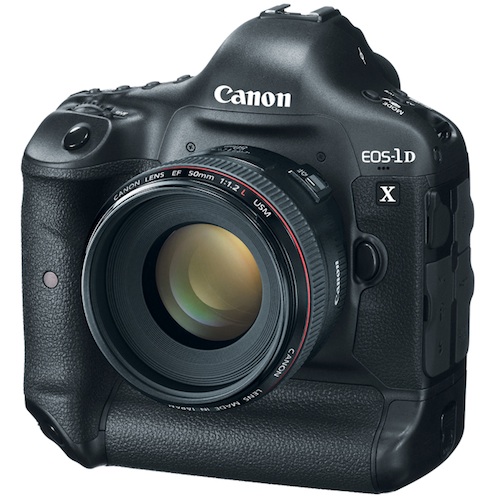 The EOS-1DX employs a completely new imaging sensor, producing the lowest noise of any EOS digital camera to date for stunning portraiture and studio work. The new 18-megapixel full-frame CMOS sensor utilizes large pixels — 1.25 microns larger than those in the EOS-1D Mark IV sensor and .55 microns larger than those in the EOS 5D Mark II sensor — together with gapless microlenses to achieve enhanced light gathering efficiency, higher sensitivity and less noise at the pixel level. The new sensor has improved on the already very high signal-to-noise ratio of sensor output of earlier EOS models for outstanding image quality, even in extremely low light. When combined with the Dual DIGIC 5+ imaging processors the results are stunning. The images produced with the EOS-1DX camera’s new sensor are so clean that files can easily be up-sized if necessary for even the most demanding high-resolution commercial applications. The EOS-1DX will also feature new Ultrasonic Wave Motion Cleaning (UWMC), Canon’s second generation self-cleaning sensor unit, which utilizes carrier wave technology to remove smaller dust particles from the sensor and it includes a new fluorine coating on the infrared absorption glass to help repel dust.

The low-light capability of the EOS-1DX is evident in its incredible ISO range and ability to photograph in extremely low-light conditions. Adjustable from ISO 100 to 51,200 within its standard range, the new model offers a low ISO 50 setting for studio and landscape photography and two high settings of 102,400 at H1 and 204,800 at H2, ideal for law enforcement, government or forensic field applications. 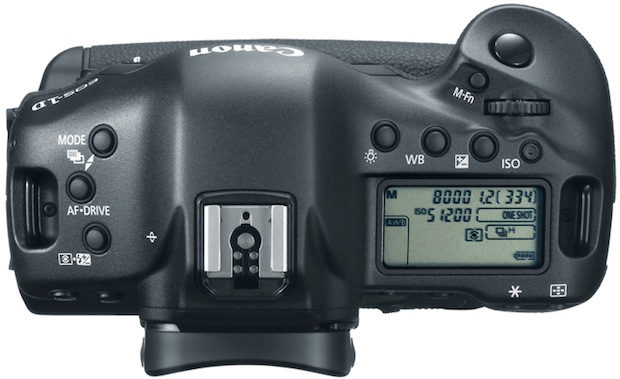 All AF functions now have their own menu tab for quick and easy access (formerly AF custom functions in previous EOS models). A new AF Configuration Tool allows for customized setting of tracking sensitivity, the acceleration and deceleration of tracking subjects, and AF point auto switching, all of which are easily accessed and adjusted via the new AF menu tab. A built-in Feature Guide advises photographers on which settings to use according to subject matter.

EOS iTR AF: Intelligent Tracking and Recognition Enhances AF Performance
The Canon EOS-1DX features incredible new EOS iTR (Intelligent Tracking and Recognition) AF options ideal for wedding and event photography as well as sports and photojournalism. The default AF mode for the EOS-1DX uses phase detection AF information, while a new second option uses Face Detection technology to track recognized faces in addition to color information, ideal when shooting events such as tennis or dancing where facial recognition of the original subject will help keep that person in focus throughout the scene.

Exposure Control
For the first time in a Canon DSLR camera, a DIGIC processor is used exclusively with the metering sensor for fast, accurate exposure control. The Canon DIGIC 4 processor takes advantage of the EOS-1DX’s 100,000-pixel RGB Metering Sensor and utilizes 252 zones for general metering or 35 zones for low-light metering to help ensure accurate evaluative ambient or flash exposure. The new subject recognition capabilities enhance nearly all of the camera’s automatic functions, helping to adjust exposure, autofocus, Auto Lighting Optimizer and Automatic Picture Style to the scene being captured for enhanced image quality. 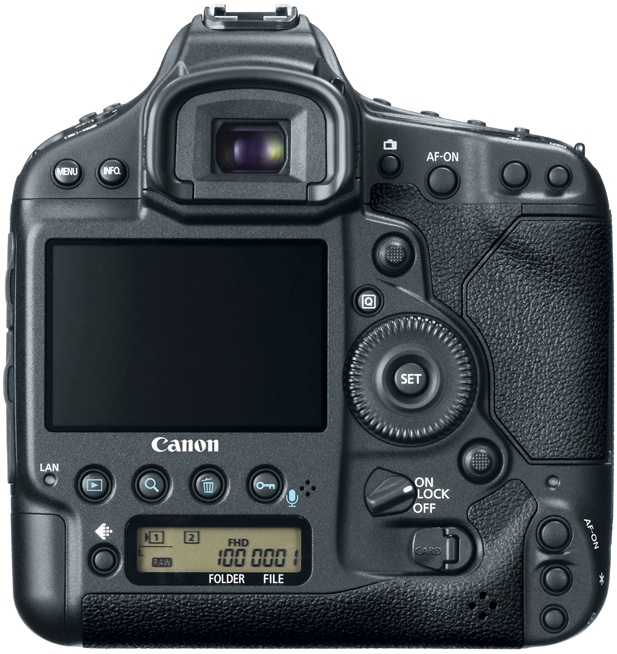 Multiple Exposure Modes
The EOS-1DX is the first EOS Digital SLR to feature Multiple Exposure capability. The camera can combine up to nine individual images into a single composite image, with no need for post-processing in a computer. Four different compositing methods are provided for maximum creative control, including Additive, Average, Bright and Dark. Compositing results can be viewed in real time on the camera’s LCD monitor, and there is a one-step Undo command that allows photographers to delete an image and try again if desired. The EOS-1DX’s Multiple Exposure mode even allows photographers to specify a previously captured RAW image as the starting point for a new Multiple Exposure composite image.

Super High Speed Mode
The Canon EOS-1DX camera breaks new ground in the world of digital SLRs, offering a Super High Speed Mode which increases shooting speeds up to 14 fps at full 18-megapixel resolution in JPEG mode1. The new camera is also capable of shooting RAW, JPEG, or RAW+JPEG at speeds up to 12 fps in One Shot AF or AI Servo AF for enhanced performance in sports photography and other applications requiring high-speed digital capture. This new level of performance is made possible by the combination of the EOS-1DX’s 16-channel readout CMOS sensor, Dual DIGIC 5+ image processors, and a completely new reflex mirror mechanism that has been engineered by Canon to combine high-performance with exceptional precision and reliability.

Enhanced EOS HD Video — New Compressions, Longer Recording
Centered around an all-new full-frame CMOS sensor with larger pixels than those found on the EOS 5D Mark II image sensor, the EOS-1DX utilizes new HD video formats to simplify and speed up post-production work. The two new compression formats offered on the EOS-1DX include intraframe (ALL-i ) compression for an editing-friendly format and interframe (IPB) compression for superior data compression, giving professionals the options they need for their ideal workflow. Answering the requests of cinematographers and filmmakers, the EOS-1DX includes two methods of SMPTE-compliant timecode embedding, Rec Run and Free Run, allowing multiple cameras or separate sound recording to be synced together in post production.

Canon’s all new full-frame CMOS sensor ensures that video footage captured on the EOS-1DX will exhibit less moiré than any previous Canon model, resulting in a significant improvement in HD video quality. A desired feature for many documentary filmmakers using Canon DSLRs was to enable recording beyond the four gigabyte (GB) file capacity and the EOS-1DX is the answer. The new camera features automatic splitting of movie files when a single file exceeds 4GB. The new file splitting function allows for continuous video recording up to 29 minutes and 59 seconds across multiple 4GB files; no frames are dropped and the multiple files can be seamlessly connected in post production, providing filmmakers the recording time they want in the same convenient DSLR form factor. The camera records Full HD at 1920 x 1080 in selectable frame rates of 24p (23.976), 25p, or 30p (29.97); and 720p HD or SD video recording at either 50p or 60p (59.94). SD video can be recorded in either NTSC or PAL standards.

The Canon EOS-1DX also includes manual audio level control, adjustable both before and during movie recording, an automatic setting, or it can be turned off entirely. A wind filter is also included. Sound can be recorded either through the internal monaural microphone or via an optional external microphone through the stereo mic input. 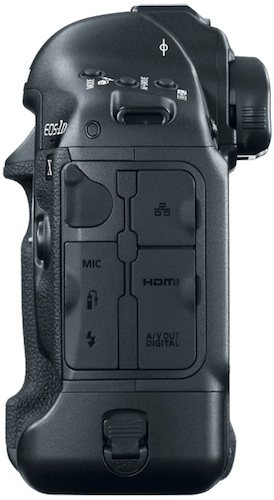 Enhanced Ergonomics & Optimized Design
Photographers familiar with Canon’s EOS 1D-series of cameras will notice the control configuration of the EOS-1DX takes a different approach to button placement. The re-designed exterior and ergonomic button configuration feels comfortable in your right hand, allowing seamless navigation through menu options. The Live View Button has been conveniently placed near the user’s thumb for one-touch switching between Live View and Viewfinder shooting. The Quick Control Button and menu navigation controls will allow users to change camera settings using only their right hand, for fast, simple one-handed control using their thumb on the scroll wheel. The new multi-controller is positioned by the right hand thumb when the camera is held for vertical shooting and enables the same level of control to camera operators when shooting vertically as they have when shooting horizontally. On the front of the camera are four user assignable function buttons, two for vertical shooting and two for horizontal shooting, allowing customizable button control when shooting in either position. The camera also features a level of weather resistance equivalent to earlier professional models such as the EOS-1D Mark IV.

Canon has answered the request of many professional EOS photographers and incorporated Dual Card Slots into the new EOS-1DX DSLR camera. The dual CF card slots will allow photographers to carry only one memory card format and still achieve instant image back-ups and enhanced storage capacity.

This camera also features a new shutter design with even greater durability and precision. Rated to 400,000 cycles, the new carbon fiber shutter blades are more lightweight and durable, allowing the EOS-1D X to achieve over 100,000 cycles more than the shutter of the EOS-1D Mark IV. A new shutter motion and new motor help further reduce vibration in the camera. The EOS-1DX also features an electronic first curtain, new to the EOS-1D series DSLRs, for minimal in-camera vibration during image capture.

Connectivity
For professional photographers who prefer a wired workflow and transfer system, Canon has included a built-in LAN connection in the EOS-1DX DSLR. The built-in LAN connection features a gigabit Ethernet Jack capable of 1000BASE-T transmission speeds, offering photographers a stable wired connection for ultra-fast data transmission. If the network were to go down, the camera will attempt to resend images until the files are sent. The EOS-1DX also features a direct image transfer function whereby images can be selected for transfer, and only sent once a LAN or USB connection is established. 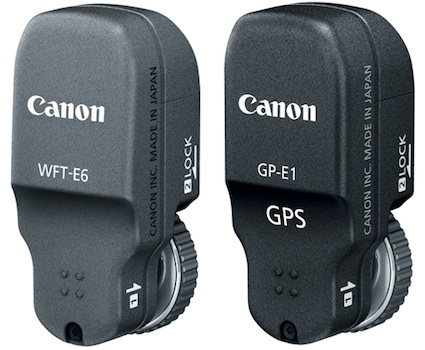 Accessories
Designed exclusively for the EOS-1DX, the new Canon WFT-E6A Wireless File Transmitter* features wireless LAN support for 802.11n network transfer rates providing users with increased communication speed when compared to previous models. With this new dust and weather resistant model, professionals can synchronize clocks on multiple cameras and use the unit to support linked shooting when utilizing multiple cameras. In addition, Bluetooth-compatible equipment can be easily linked to the device as well.

The EOS-1DX also offers an optional Canon GP-E1 GPS Receiver, which can be easily integrated into the camera’s body. Powered by the camera, this GPS receiver provides the same weatherproof resistance as the EOS-1DX, even at the connector. With an electronic compass on-board, the GP-E1 will log movement — latitude, longitude, elevation, and the Universal Time Code — and allow viewing of camera movement on a PC after shooting. The receiver will also record camera direction when shooting, even when shooting vertically.

Pricing and Availability
The Canon EOS-1DX Digital SLR camera is scheduled for March 2012 availability and will be sold in a body-only configuration for $6,800. The compact, lightweight WFT-E6A Wireless File Transmitter is scheduled to be available in March 2012 for $600. Availability for the GP-E1 GPS receiver is expected in April 2012 for $300.