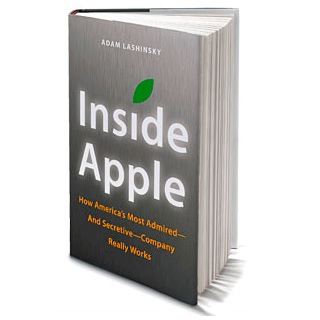 In the days and weeks before the new iPad was announced, the media was rife with rumors about what Apple fans could expect from the new device. But few might know that Apple employees were among those who waited anxiously to find out what their own company had planned. In the book, Inside Apple: How America's Most Admired — and Secretive — Company Really Works, by Adam Lashinsky, a senior editor at Fortune magazine, provides a rare glimpse into one of the world's most innovative firms. Knowledge@Wharton recently had an opportunity to talk with Lashinsky about just how far Apple's secrecy extends, how the company will fare without Steve Jobs and what types of changes to expect under Tim Cook's leadership.

An edited transcript of the interview follows.

Adam, thanks so much for joining us today. I read in your book that Apple didn't make Steve Jobs, David Cook or any Apple executive or employees available for interviews. You have written Inside Apple, as it were, from outside Apple.
Yes.

How did you manage to do that?
I interviewed many, many, many people who worked at Apple at some point, their partners and suppliers, and other people who had dealt with them in one way or another. My [focus] for the research on the book was … the last 15 years. Since I wrote a book about how Apple operates, I wanted to talk to people who were there while they were in their radical, wonderful transformation [dating back to] 1997. I spoke with very senior people and very junior people and everybody in between. My perspective on that is that their perspectives were as valuable to my task as any I would have gotten had I had senior-level interviews with Apple executives.

Apple is so closely identified with Steve Jobs. He was such a larger-than-life personality and so closely identified with the company's identity. How has Apple changed since he passed away last year?
So far, Apple has not changed much at all. Because there is such intense interest in the company, the people who watch Apple are grasping at straws to try to discern a change. There have been little things. Tim Cook, the new CEO, instituted U.S. philanthropic matching grants shortly after he became CEO and before Steve Jobs died. More recently, Apple has announced that it is going to begin paying a dividend for the first time in many years. People want to latch onto these things and say, "Ah, this is the new Apple." I don't believe it for a second. These are changes, sure, but Apple was changing all the time. I think the culture, their ways of doing business, their tone, their behavior, everything is in place for the time being, [exactly] the way it was when Steve Jobs died.

Do you think it should change?
I think Apple will change. It will have to change if for no other reason than because it is so much bigger and so much more complex than it was 15 years ago when Steve Jobs came back to the company that he had co-founded. Should it change? Sure. They will have to adapt to a new reality of being big, of having more scrutiny. For example, their secrecy will become more and more difficult over time, and I suspect they will try an intelligent approach to adapting to that difficulty rather than just trying to hold things off as long as possible.

We'll come back in a bit to the issue of secrecy about which I have a few questions. But for now, why don't we talk about Tim Cook and his leadership style? Do you have a sense of how Cook is putting his stamp on Apple and how he should, in some ways, think differently by not emulating Jobs in everything he does?
One thing that Cook has going for him is that he is not Steve Jobs, and my impression of the man is that he is not confused at all about this. He is extremely different from Jobs in almost every way. He is not an emotional person. He doesn't have a creative or artistic background the way Jobs did. He's passionate about Apple, he's passionate about business, he's passionate about operational excellence. I think eventually he will put his stamp on Apple, in that it will be more professional, it will do more things and it may be more evenhanded and less quirky. But I think he will do these things over time.

In what ways is he different from Jobs?
Cook is different from Jobs in almost every way: educational background, demeanor, the things that they are personally interested in. Cook is a workaholic, as was Jobs, but he is somebody who doesn't have a lot of outside interests. He is interested in fitness and in sports and in not much else. He doesn't seem to be interested in the finer things in life. Jobs led a relatively simple life for a multibillionaire but he did have some expensive habits and tastes. Jobs was a product person, and there is no indication that Cook is.

Interesting. Let's come back to the question of secrecy. As we all know, Apple's corporate culture is notoriously and even obsessively secretive. What do you think are the pros and cons for Apple?
Let's start with the pros of secrecy. Secrecy, taken to its extreme as Apple does, makes Apple an incredibly focused and disciplined company. Its people do not typically multitask; they focus on one thing. They don't get distracted because they are trying to pay attention to somebody else's business. They pay attention to their business and only that. Apple does a very good job of not letting its competitors know what it is working on, and Apple does a very good job of not confusing customers by causing them to anticipate what the next new thing is going to be and then causing those customers not to buy the products that are on the shelves now. There is obviously a negative to this secrecy. Apple is so secretive internally, they keep secrets from each other. At some point, you would assume that this would hurt morale, that it would make people not feel good about working at a place where they are treated like horses fitted with blinders on, not supposed to look right or left [but] just charge forward. Playing for a winning team or having a winning team has covered up what we might otherwise expect to bubble up [as] poor morale up until now.

We have heard from some people that Apple has been known to hire people into fake jobs. Did you find any of that in your reporting?
Yes, I refer to these as "dummy positions." In other words, you are told that you are coming to work at Apple. You may even be told broadly what kind of project you might be working on, but you are not told specifically what you are being hired for. The fact that you have been vetted and that you have been hired to work at Apple should be good enough for you for the time being, and furthermore, even though we have hired you, frankly, we haven't decided if we can trust you yet. And once we figure out that you can be trusted, then you will find out the specifics of your position.

Is Cook as obsessive about secrecy as Jobs was?
There may be reason to believe that Cook is more obsessed with secrecy. We will find out, but as secretive as Jobs was, he would go ahead and spill the beans when he felt like it. He would give press interviews, and he would explain what was going on at Apple. He did this in an orchestrated, calculated way and with great, great effect in terms of publicity and promotion. So far, there is less evidence of Cook behaving that way, but we don't have as much time to look at. It has been an extraordinarily difficult time. In his short tenure as CEO, he has had to deal with, first, the resignation of a founding genius, his boss, and then, that person's death.

Right. The details of the iPad 3 were known before the launch. Do you think this was an intentional change in strategy?
Well, it is interesting you refer to it as the iPad 3 because that was one of the rumors…. Of course, Apple chose not to call it the iPad 3; they chose to call it the new iPad. It is not unusual in past years for aspects of new products to leak out ahead of time. I think the dribble has become a little bit more of a flow, so no, it wasn't a huge shocker. There were still surprises with this announcement. If we looked at the transition from iPad 1 to iPad 2, we might have assumed that the iPad 2 would be phased out. It is not going to be phased out. Of course, the name also was a surprise, but no, I don't think it is terribly shocking that we knew that they were going to go to a better screen resolution. These things will come out because suppliers can't be kept completely quiet.

Apple has an unconventional organizational chart right at the beginning called "Apple's core." Help us understand how you think Apple's hierarchy works? Do their people operate in ways that are independent of the organizational chart, and if so, how? 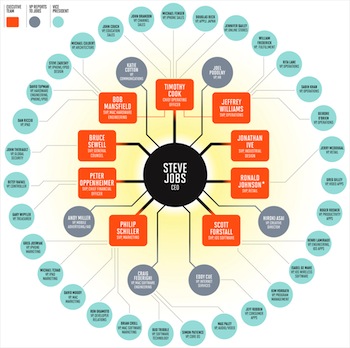 Apple is a military-like command-and-control organization where people lower down in the organization manage up. They are constantly preparing their boss who may be preparing their boss and their boss for a presentation to the CEO or to the executive team. People below manage up, and people at the top manage down. Information is held very tightly at the top, and the only information that seeps down is the information that senior management wants to seep down, which includes, by the way, rapid and thorough feedback on product development that is underway. The org chart is such that the CEO does not have to reach far down into the organization to get very good information. I presented the Buy "Inside Apple"
$26.99 at Amazon