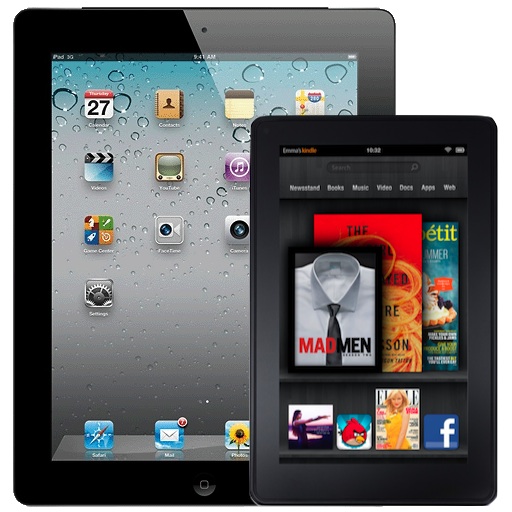 Amazon announced four new Kindles: three e-ink models and one extraordinary 7-inch color tablet-style device called the Kindle Fire. The e-ink models are noteworthy because of their low price points. Amazon now owns the low-end of the market. The Kindle Fire is noteworthy because it is not a piece of hardware, it is a portable user interface to over 18 million books, songs and movies on Amazon.

Is the Kindle Fire an iPad killer? No. It’s not really a tablet-computer. It lacks cameras, access to a wireless 3G network, screen size and a wealth of other stuff that make the iPad 2 stand alone. However, the Kindle Fire/Amazon ecosystem is the first viable competitor to the iDevices/Apple ecosystem, and I think Jeff Bezos and company is going to give the House that Steve Job’s built a run for their money.

I don’t think it’s fair to compare the Kindle Fire to an iPad 2. It should probably be compared to the first iPod that had access to the iTunes Music Store. The hardware was over-pretty, over-priced and under-featured. But… and it was a big but… the iPod was simply a portable user interface to the iTunes Store. Steve Jobs took your hard-earned money and, in exchange, he put you in Apple prison. Granted, it was a gorgeous prison with lots of music and bells and whistles, but it was still a prison.

The Kindle Fire is $199. For $79 more, you get Amazon Prime which gives you free shipping and access to the Amazon streaming library. I’m sure if you calculate the revenue per unit, Amazon could afford to give it away for free — just like they give away cell phones. Why? Because after you buy it, you are going to be in Amazon prison. This is not a bad thing; it’s just what it is.

Which begs for the question: “Is Amazon prison going to be greater than, less than or equal to Apple prison?”

Before you sentence yourself, you should know that the jury is still out. Amazon’s technological approach to the Kindle Fire is non-trivially different from other tablet-style devices.

First, even though the Kindle Fire runs Android, you will not know it. Amazon has completely taken over the user experience. So much so, that even the web browser is conceptually new. Amazon calls it the Silk browser and it takes advantage of Amazon’s vast storage and computing clouds to deliver content in a technically different way than other browsers do. I won’t bore you with the geek-speak, but Amazon has control of the content you browse in ways that are, well… non-trivial. Do you care? No. Remember, you’re in Amazon prison.

The Kindle Fire only has 8GB of internal storage. According to Amazon, that’s enough for 80 apps, plus either 10 movies or 800 songs or 6,000 books. I know that sounds like a lot. It is. But, what do you do with the 10 movies once you’ve watched them? The answer is Amazon’s “free” Cloud Drive. Amazon says that you will be able to store everything you purchase from them in the Amazon cloud for free. That’s your virtual footlocker while you are in Amazon prison. What do you do with the content you want to store that you didn’t buy from Amazon? Ahh… glad you asked. You purchase storage space from Amazon Cloud Drive. How much is it? How long will the prices stay this low? Good questions. We’ll know soon enough.

Speaking of Apps, the Kindle Fire only allows you to purchase Apps from the Amazon marketplace and, as with all magnificently designed correctional facilities, Amazon will curate your selection. This is actually a very good thing because quality control is an oxymoron in Google’s Android Marketplace. I believe that you will be better off having Amazon mind the store for you. But, gorgeous as it is, it’s still a prison.

Unlike the iPad, the Kindle Fire is supposed to play Adobe Flash files. How well? You will have to judge for yourself.

From my perspective, none of the hardware issues, nor he price, matter with the Kindle Fire. The device is awesome. It will improve over time and Amazon is sure to keep working hard to lower the prices and give more value to its customers.

This is a curated content play and it is a brilliant move on Amazon’s part. Like many of you, I am already in Amazon prison with my Kindle. And, I am none the worse for wear. I love my Kindle and the Kindle Apps on my MacBook Air, iPhone 4, Droid Bionic, iPad 2 and even on my Motorola Xoom. Amazon consistently gives me great service, great products and great consumer experiences all at competitive prices. If you’re looking for a 7-inch (1024×600) sized color e-reader with web browsing and 18 million files to choose from — the Kindle Fire is your new portable interface. If you’re a loyal Amazon customer, Jeff Bezos made this just for you!