Is the Motorola Xoom an iPad Killer?
No. It is built for a different audience. Non-technical people can enjoy almost every Apple product with limited or no instruction. The Motorola Xoom requires an understanding of what you are trying to accomplish and knowledge of the computer metaphors it draws upon to accomplish the tasks. So, while my 77 year-old mother (who had never used a computer in her life) figured out how to use an iPad in less than an hour — she will be confused and frustrated by the Xoom.

Who should not buy a Motorola Xoom?
If you have been waiting and waiting for the iPad 2 to arrive, do not buy a Xoom. The iPad 2 will be an Apple fashion accessory, have a zillion (that’s a technical term) apps available for it and, it will not be buggy or feel like a beta release in any way. It will just do the stuff you expect it to do. (Author’s note: No death threats please, no one who wants an iPad will be happy with a Xoom.)

Who should buy a Motorola Xoom? iPad is to Apple as Xoom is to Google. If you are a heavy user of the Google Apps — specifically, Gmail, Google Calendar, Picasa and YouTube, etc. there are a lot of things to like about the Xoom. However, it is a work-in-progress. Android 3.0 (Honeycomb) is a beautifully redesigned version of Android specifically optimized for tablet computing. However, although the available apps look pretty — even Google’s core apps truly feel like beta releases (Force Quit!). 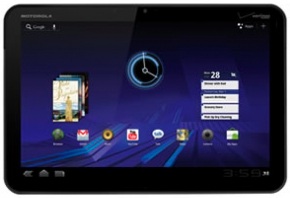 The Xoom has an impressive set of features. If you like to buy features, such as: Raw Processing Power (1GHz Dual Core Tegra 2 Processor), 10.1 inch 1280×800 display, 32GB internal storage, MicroSD slot, native USB support, built-in HDMI connectivity, etc, you will be in heaven. The Xoom is super fast, powerful and tweekable to your hearts content. The geekier you are, the happier you will be.

The Xoom comes with native Verizon 3G EVDO connectivity. The unit will be upgradable (at no cost) to Verizon 4G LTE. That said, it’s a dealer upgrade, so you will have to part with your Xoom while it is being upgraded. Motorola has announced that a WiFi-only version will be available soon.

The Xoom has extraordinary battery life, front and rear facing cameras and it is a pleasure to hold. It feels heavy in your hands, but not to the point where it will become an issue. Although the Xoom automatically toggles between landscape and portrait mode, some of my colleagues think that the Xoom’s core apps are specifically designed for landscape use. Maybe. I like the fact that you can easily thumb type on the Xoom in portrait mode — something that is much harder to do quickly on the iPad.

Motorola Xoom Pricing
The unit I am testing is $800 from Verizon without a contract and $600 with a two-year $20/month commitment. $1,080 total). Remember, the Xoom is upgradable to 4G for free, but … Verizon has not announced pricing for their 4G service. Are there going to be $500 tablets that do what the Xoom does any time soon? In about a month, there are going to be thousands if not hundreds of thousands of first generation iPads on eBay for $200 or less. There will be dozens of name and no-name brand tablets running Honeycomb on the market before the end of the year. This Christmas is going to be Tablet Christmas, if you want to save a few hundred dollars, wait.

Overall Impressions
While there aren’t many apps available yet, I am impressed by the Xoom on many levels. It’s powerful, packed with features and has a huge amount of potential. I understand why the product was rushed to market, but sadly, it feels like it was really rushed. I have never had an iPad or iPhone app “force quit” — this is a regular occurrence on the Xoom, even with the core apps. Is it worth $800? Probably. By the end of 2011 when it is upgraded to 4G, has less buggy core apps and lots of great third-party apps available, it will be awesome. However, by then the Xoom will also have formidable competition from Apple, HP and literally dozens of others.

The Bottom Line
Unless you are the earliest of early adopters, know what this tablet is and what you will use it for, sit tight. There are too many competitive options coming soon and, in truth, Verizon, Moto and Google should have waited to release the Xoom until it was a Flash compatible, 4G device. The Xoom you buy for Christmas will be an awesome well-differentiated product, but right now it’s just a complicated iPad wannabe with two cameras.