The Motorola Droid Bionic is the biggest, baddest, coolest, fastest, awesomest 4G LTE smartphone available on Verizon Wireless. For $299 with a two-year service agreement, you can enjoy the very best features Android-powered smartphones have to offer.

Should you buy one? If I were in the market for a phone today, I would not hesitate. This phone will absolutely last you two years and, if you are an Android fan, you will be very, very happy.

What’s so good about it? First and foremost, it is a fast phone on a fast network. Forgetting the geeky part (dual-core 1GHz ARM Cortex-A9 processor), this phone has enough power to search my 24,000 person contact list almost instantly. By comparison, searching the same contact list on my iPhone 4 is about a 10-12 second experience. Like I said, this phone is fast.

The Bionic shoots true 1080p HD video. It is not an important feature, but it’s a great spec for self-described geeks to throw around. In practice, because the lens is, well, a plastic lens in a phone, HD quality is illusive unless you are under the very best of lighting conditions and your subject is perfectly placed — but, I shot and edited some 1080p HD video with the camera and it’s better than anything I can shoot with my iPhone 4. If you decide to use the HD video feature, stock up on memory cards. The Bionic comes standard with 16GB internal storage and there’s a slot which will take up to a 32GB memory card.

The handset is a Motorola Masterpiece! It is well built, feels great in your hand and, most importantly, it sounds great. The speakerphone feature is loud, clear and usable in a crowded Starbucks!

The Bionic runs Android Gingerbread, the latest Google Android operating system. Woo woo! The 4.3-inch screen is big and bright and the phone is slightly larger than the Motorola Atrix, which has been out on AT&T all year with almost the identical feature set. 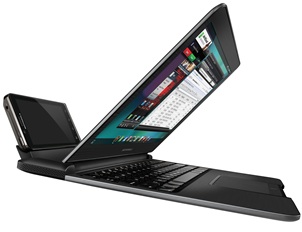 Verizon sells a laptop-like interface for the Bionic which is also $300 and fun for about 10 minutes. Then you will wonder why you bought it. There is also a docking station and some other stuff you can buy. Will your AT&T Motorola Atrix accessories work with your new Verizon Motorola Bionic? Of course not.

Almost every article I’ve read makes a big deal about the price of the phone — $299 with a two-year commitment. Is that too much for a device that replaces an 8-megapixel camera and 1080p video camera, offers an HDMI-enabled video playback system (just take a cable and plug your Bionic into your HDTV set and watch videos in HD on the big screen), a Wi-Fi 4G Hotspot and is a full-featured smartphone on America’s best network? You decide.

I will only offer one bit of advice. If you choose to get the phone, do not walk out of the store without the extended battery. This is not optional. It’s going to make the phone even more expensive, but without it, you will have to plug your phone into a charger by noon every day. I don’t know where the engineers got the 11 hour battery life spec from? It’s just not true. Make three 10-minute phone calls, check your email three or four times an hour. Respond to five text message an hour, send a few, and your battery will be 50% depleted by noon. I’ve done this test everyday for seven days — real world use without an extended battery, half a business day.

Can you eek out more battery life? Yes, turn off everything, location services, background data, email push, notifications, Facebook, Twitter, Bluetooth, Wi-Fi and the 4G radio … kill it all, and you can get seven to eight hours of talk, txt and standby time. However, if that’s how you’re going to use the phone, why buy it? Just get the extended battery and enjoy.

The bottom line, if you’re an Android fan, the Verizon Motorola Droid Bionic will make you smile from pixel to pixel!

Android Community9 years ago
You Are Here