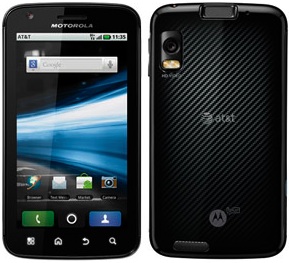 Since I got my first iPhone, I have been brutal to AT&T. I have often said, “I’ve never ended an AT&T iPhone call with goodbye … it’s always: Hello? Hello?”

While I was pondering this trade-off, the nice people at Motorola sent me a new AT&T Motorola Atrix 4G smartphone to review. All I can say is, “Wow!” The Atrix may be the fastest, most powerful pocket computer I’ve ever held in my hand. Yes, it’s a phone and yes, it runs Google’s Android 2.2 Froyo operating system — but, as smartphones go … I’ve simply never had more fun. If I was in the market for a smartphone today, the Atrix would be my first choice. And, because it is available from AT&T, the data network experience is awesome! Of course, the Atrix is a 4G phone. But it falls back to 3G where there is no 4G coverage. At the moment, that make the Atrix more of a super fast 3G phone than a 4G phone. However, when you’re in an area with 4G coverage, it is doubly awesome!

Is the Atrix an iPhone killer?
Yes! This is the first smartphone that can truly be called an all-singing, all-dancing iPhone killer. It is better built, better equipped, in fact, better at everything than the iPhone 4.

What’s inside?
The Atrix has a dual core 1Ghz processor and 1GB of RAM, which is more computing power than the average netbook. It also has front and rear-facing cameras, captures video in HD and has a big, beautiful touchscreen. On a feature-for-feature basis, this handset is as good as it gets.

What sets the Atrix apart from the iPhone?
While the iPhone takes advantage of a low learning curve, it is part of Apple’s closed environment. You get iTunes and apps, which for most people, is exactly what they want. But the iPhone starts to lag behind when you try to actually accomplish complex tasks in a mobile environment.

There’s no competition with the Atrix’s hardware. If you think the iPhone 4 is fast, then the Atrix will feel magical. Once you start using the phone, the back button becomes the ultimate undo — letting you instantaneously revert to the last screen you were on. The browsing experience is lightning quick with fluid scrolls and resizes text much better than iOS. The only frustrating experiences come from trying to copy and paste plain text. But, any actionable item can be easily copied, made into a widget or shared with one click and the keyboard’s force feedback makes typing subtly tactile.

One of the most notable features is Motorola’s use of HDMI. With one standard cable, you can charge your phone or use a dock to display your multimedia on the big screen. This is where the Atrix gets even more interesting. 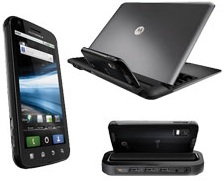 The Atrix is so powerful that it can run a computer and stream HD video. Motorola is offering two accessories that, while overpriced, fall into the category of nice to have.

The multimedia dock lets you charge the phone and provides 3 USB ports and an HDMI-out. This means that you can plug in a keyboard and mouse, plug the phone into your TV, and use your apps on screen. You can start playing a YouTube video on your phone, plug it into the dock, and resume play on the TV. For $100, this is much more than a charging dock.

You can also plug the phone into the back of a thin laptop-like docking device. The effect is awesome; it looks like your phone is powering a laptop or netbook. It isn’t, of course. The webtop dock is really just an interface that is made to look and feel like a small laptop computer. The trackpad isn’t multi-touch and games that require zoom are hard to play. That said, if you want to access the features of your Atrix with a big, physical keyboard and a 13″ screen, the Webtop unit may work for you.

Who should buy the Atrix?
If you are a mobile power user or someone who carries around an iPhone and a BlackBerry, the Atrix is a viable one-phone solution. If you live your life on Google, Android’s 2.2 Froyo OS integration of contact information, phonebook and calendar creates a powerful suite of productivity tools.

Not only does the Atrix seamlessly integrate contact information from your Google accounts, it also integrates any information shared by your Facebook friends. Type in the name of who you’re looking for and the Atrix will return their phone number, email address, website and even a picture — automatically. Truthfully, the Atrix is so feature-laden; I could not cover it all in one article.

Who shouldn’t buy the Atrix?
If you want a phone that requires virtually no customization, the Atrix is not for you. The Atrix is not a fashion accessory or a trend, it’s a phone that can be used to get business done. If you love your iTunes library or hate using Google apps, stick to your iPhone or BlackBerry.

Overall Impressions
The Motorola Atrix is probably the best phone ever offered by AT&T. With its raw power, massive app store and multi-tasking capabilities, the phone is more computer-like than anything I’ve seen so far. Like I said, if I was in the market for a smartphone today, the Atrix (available at Amazon.com) would be my first choice.