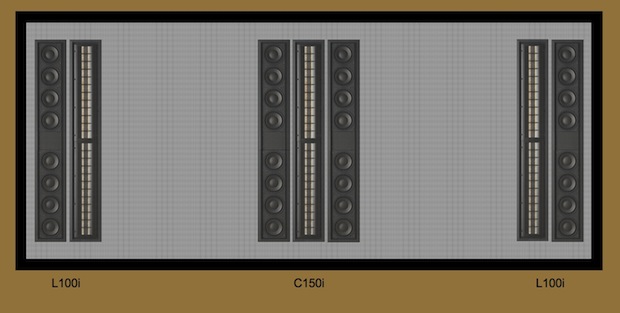 Specifically Designed for Use Behind Perforated Projection Screens

“Due to customer demand for Sage Series line source solutions for use behind perforated screens of numerous sizes, we are adding two new models to the line,” explained Mark Glazier, Wisdom Audio president. “High-end home theater video projection systems with 2.35:1 aspect ratios are becoming increasingly popular and, as a result, the market has seen an increase in demand for commensurately high-performance hidden speaker systems that can be fully integrated behind these new screens. That’s where the new L100i and C150i come in.”

Today, several high-end projection screen companies have developed innovative material patterns that allow the use of speakers behind the viewing surface so as to not compromise video or audio performance. These new screen materials provide rich visual detail while also keeping the front speakers hidden from the audiences’ view. Marrying the concept of superior audio and video solutions, the screen materials’ design allows for unsurpassed audio quality from the hidden speakers while maintaining high-end video performance. Now, Wisdom Audio is leading the industry with high-performance speaker solutions specific to these high-end projection screens’ designs.

“Considering the center channel handles the majority of soundtracks’ vocals and explosions, we wanted to offer a no-compromise option to those customers who want the best performance possible from their center channel,” added Glazier. “Of course, for those that wish to do so, it is entirely possible to use the C150i for the left and right channels behind the screen, as well.”

As is the case with every Sage model, each speaker is designed to be used with the SC-1 electronic crossover and is biamplified. These new models’ woofer sections are designed to have each eight-woofer array driven by a 500-watt channel of an SA-1 amplifier for maximum impact. Further, because the SC-1 also incorporates Audyssey MultEQ XT technology, any impact the perforated screen may have on the system’s audio playback will be compensated for, delivering sound to the entire listening area comparable to or exceeding the performance of the best freestanding speakers.

“The new L100i and C150i models will be available only as in-wall versions,” Glazier continued. “Dealers typically have to find room behind a perforated screen for on-wall or freestanding speakers that match their best clients’ performance expectations. These new Sage Series models finally provide Wisdom Audio dealers an in-wall option for these clients that meet or exceed their performance criteria. It is even possible to use a retractable perforated screen that, when not in place, leaves only beautifully designed in-wall speakers, painted to match the color of the wall. Because the SC-1 System Controller also includes multiple setup/listening memories, these two different ‘screen down, screen up’ listening profiles can be accessed conveniently on the front panel or on a control system via RS-232.”

Wisdom Audio has recently brought to market more than 20 Sage Series models, encompassing in-wall, on-wall, and freestanding versions of most configurations ranging from 20 inches to 76 inches tall. Sage Series speakers incorporate new generation proprietary thin film planar magnetic drivers which allow for its narrow and shallow physical characteristics, thus permitting the unprecedented possibility of the same driver complement and back box to be used for such varied applications, ranging from in-wall to freestanding.

About Wisdom Audio
Wisdom Audio is the leader in designing and manufacturing high-performance planar-magnetic transducers with more than 90 man-years experience. Wisdom Audio was founded in 1996 to create no-compromise planar loudspeaker systems for the most demanding and critical audiophiles. Wisdom Audio systems employ proprietary, custom-made planar magnetic and dynamic transducers optimized for high-performance, high-end architectural audio reproduction applications. Its hybrid-technology systems have earned praise and awards from the specialized media, while satisfying a growing base of customers and dealers worldwide.