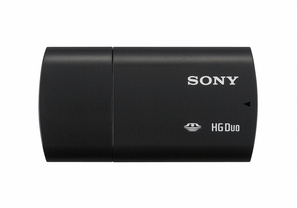 Sony is expanding its line of Memory Stick media to offer higher levels of versatility and mobile entertainment options. The new products include enhancements that range from USB connectivity and pre-bundled movie content to faster data transfer rates and higher storage capacities.

The newest member in the line is the HX series of Memory Stick media, offering high speed and convenience at an affordable price in either 4 or 8 GB capacities. The new HX products include a USB adaptor and enable higher transfer rates — especially for large capacity files.

“New consumer electronics devices such as digital SLR cameras and HD camcorders are driving the demand for higher capacity storage with greater connectivity and faster transfer speed,” said Shane Higby, director of marketing for Sony Electronics’ consumer media group. “With the included USB adaptor, the new HX series gives users the convenience of transferring pictures and video to their PC faster and easier.” 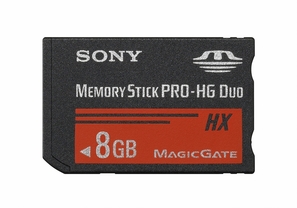 This pack includes a launcher DVD featuring the four movies, and users can easily unlock the title of their choice using a provided code and transfer it to the Memory Stick media. Each movie is optimized for playback on Sony’s PlayStation3 or PlayStation Portable systems.

The Memory Stick Entertainment pack is available in the 2GB and 4GB PRO Duo capacities and at the same price as the regular Memory Stick PRO Duo versions.

New Memory Stick Micro M2 Media
Rounding out the expanded Memory Stick portfolio is a new line of Memory Stick Micro™ (M2™) media, designed for use with compatible Sony Ericsson multimedia phones. These new models are available in one, two, four and eight GB capacities, and come with a USB adaptor, giving users the flexibility to copy data to their M2 media and then transfer it to a PC with USB port.

The following is suggested pricing and availability for the new Memory Stick media: