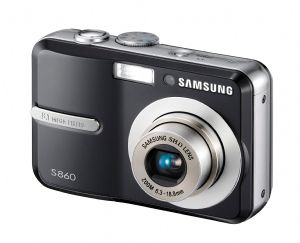 Compact and stylish, the S760 and S860 feature a 3x optical zoom (35mm film equivalent: 38~105mm) Samsung SHD lens, and offer shooters Digital Image Stabilization (DIS) to help minimize the effect of camera shake and produce sharp, clear images, especially in low-light environments. Users can also take advantage of advanced features such as Face Detection and Self Portrait mode. Face Detection technology makes taking pictures of family and friends a snap, as it detects up to nine faces and automatically adjusts focus and exposure to ensure better composition and image quality. Self Portrait mode is a unique functionality that takes the guessing out of taking a self portrait. By utilizing Face Detection technology, the S760 and S860 automatically detects the user’s face, adjusts focus and exposure, and will only allow a photo to be taken if the subject is centered in the frame.

“Samsung brings a fresh perspective to the world of entry-level digital cameras with its S-Series,” said Stewart Henderson, Vice President of Marketing, Samsung Opto-Electronics America. “The S-Series offers the entry-level photographer much more than just family of bare-bones digital cameras, and that’s especially true with the new S760 and S860. Building on previous S-Series models, the S760 and 860 combine a number of advanced and fun features, all which are non-intimidating, easy to use and which encourage the end-user to experiment with all that the cameras have to offer.”

Users can also benefit from the cameras’ Function Description feature. Designed to reduce the intimidation factor of the cameras’ various modes, Function Description automatically provides a brief and easy to understand description of each setting when scrolling through the cameras’ menus, helping the end-user determine which setting is appropriate for their current shooting scenario. Additionally, with 11 scene modes to choose from, including Night, Portrait, Children, Landscape, Close-Up, Sunset, Dawn, Backlight, Fireworks, Beach & Snow, and Self Portrait, shooters can rest assured that they’ll be able to effortlessly adjust the cameras and capture the best image possible in any setting.

The S760 and S860 also boast a special effects “E” button, which gives users instant access to a host of creative controls, including options for resizing and rotating images, adjusting brightness, contrast and saturation levels, fixing red eye, and manipulating color such as saving captured images as B&W, Sepia, Red, Blue, Green, and Negative. Users can also shoot video with the S760 and S860. The cameras’ Movie mode lets users capture video in one of two resolutions, 320×240 or 640×480, at 30 frames per second in AVI (MJPEG) format. Just as in still-picture mode, the DIS image stabilization system can be engaged to compensate for camera shake and to reduce blur.

For maximum versatility, the S760 and S860 can be powered by two, readily available AA alkaline batteries, a considerable benefit for travelers and photographers on the go as they don’t have to worry about forgetting a battery charger at home.