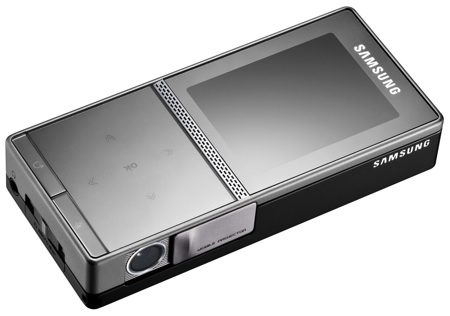 Compact and lightweight, the portable MBP200 can connect to mobile phones and laptops and by utilizing the DLP pico chip from Texas Instruments it allows users to transform their traditional two inch screen to a 50-inch viewing screen allowing others to share in the video experience. In addition, users can easily transfer files and project content independent of an attached source via the microSD card slot. The MBP200 has a simple shape and design with touchpad controls on the right side of the device for easy navigation and a 2.2-inch QVGA LCD screen which allow users to view content privately.

Samsung’s MBP200 offers the latest entertainment features and independently supports standard Microsoft Office and PDF formats for display. With the MBP200, users can listen to music and create playlists, as well as view video, pictures or PDF, PowerPoint, Word or Excel files.

The Samsung pico projector delivers a superior picture from a mobile device and is powered by a miniaturized version of the same imaging technology found in DLP HDTVs, home theater projectors and large-scale cinema houses. The unit can accommodate a range of projected image sizes — from an 8 1/2 x 11 standard sheet of paper to a large 50-inch screen. For added convenience, the MBP200 comes with a small screen holder with a telescoping pole hidden inside, which can instantly turn a standard sheet of paper into a screen to view movies, document files or pictures. The 3.5mm standard jack allows users to enjoy their own headphones or speakers, or the built-in external speaker allows the MBP200 to play audio directly from the device.

The MBP200 will be available later this year.