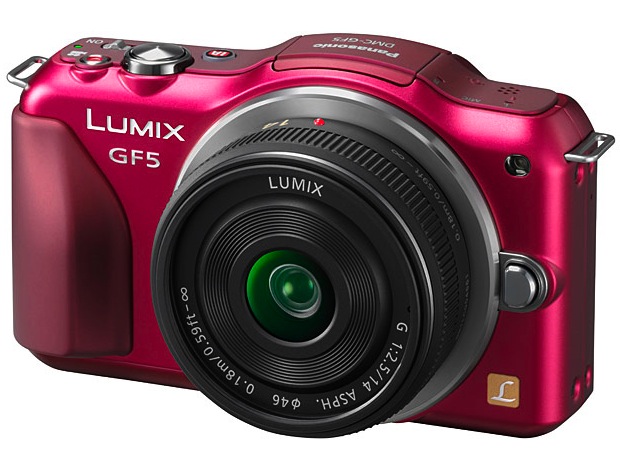 Sporting a sophisticated and stylish design, the DMC-GF5 features a compact, lightweight body with built-in flash. A rubberized grip makes it easier for users to comfortably hold the camera in one hand. Complying with Micro Four Thirds standard, a wide range of interchangeable lenses is offered to expand photographic experience even more broadly at higher level of photo quality.

The LUMIX GF5, like all cameras in the LUMIX G Series, adopts Contrast AF (Auto Focus), so focusing is controlled by the image sensor. Compared with the Phase difference system AF, Contrast AF boasts higher accuracy, especially when shooting with a bright lens with small F value. To further advance the Contrast AF, the GF5 incorporates full-area focusing, making it possible to set focus on any point in the field of view.

Featuring an ultra high-speed Light Speed AF, the LUMIX GF5 can focus in approximately 0.09 seconds making it possible to capture even fast moving subjects clearly. Combined with Touch AF control and high-speed burst shooting at four frames per second in full resolution, it has never been easier to capture fast-moving objects clearly. Additionally, Pinpoint AF allows for even more precise focus by further enlarging the focus area, assisting, for example, to set focus directly on the pupil of an eye. 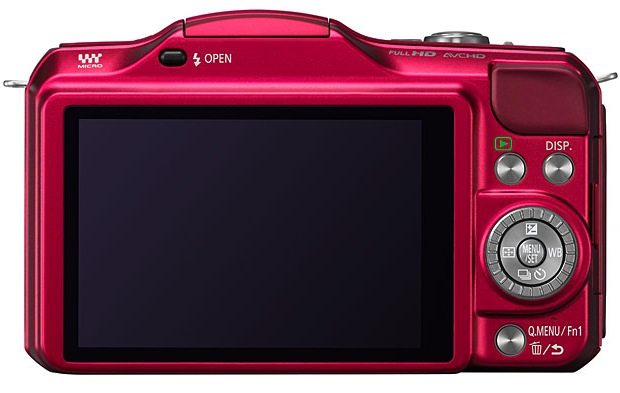 The LUMIX GF5’s large, 3.0-inch 920,000-dot high-precision touch display and Graphic User Interface (GUI) provide users with ease of use and simple operation. The touch-control system immediately allows users to set focus on a subject just by touching the screen and users can even release the shutter to snap a photo directly from the touch screen. Once a user locks onto a subject by a touch, the camera will track the subject with the AF tracking function, even if the subject moves. Touch Zoom is also available when the LUMIX Power Zoom Lens H-PS14042 lens or H-PS45175 is mounted.

Creative Control Mode has been upgraded from the LUMIX DMC-GF3 by increasing filter options available on the LUMIX GF5 from six options to 14, adding Soft Focus, Dynamic Monochrome, Impressive Art, One Point Color, Cross Process, Low Key, Toy Effect and Star Filter, in addition to the conventional Expressive, Retro, High Key, Sepia, Hi Dynamic and Miniature Effect modes. With the new GUI menu tab, switching filter effects is seamless. A preview of filter effects can be seen on the large LCD screen via Live View mode and the camera intuitively recommends filters depending on the scene that the camera detects in iA (Intelligent Auto) or iA Plus mode.

For beginner users of interchangeable lens system cameras, the GF5 features a new Scene Guide offering 23 sample pictures shot by professional photographers. Users can choose the photo closest to the situation that they are shooting and optimal parameters for shooting the scene will be set automatically. Additionally, procedures, technical advice and recommended interchangeable lens options for the scene can be shown to allow users to better understand and learn photography.

In addition to shooting still photography, the LUMIX GF5 can also record 1920×1080 60i full-High Definition videos in AVCHD format which excels in both compression efficiency and compatibility with AV equipment for playback. In addition to practical full-time AF, the Touch AF in video recording also lets the user enjoy professional-like selective focusing which allows the focus to be changed while shooting video. The LUMIX GF5 features a dedicated video record button on the top of the body so users can instantly start recording videos while shooting photos without having to make setting adjustments. Along with full-HD video capabilities, the LUMIX GF5 also features high-quality sound, recorded with Dolby Digital Stereo Creator. Videos can be recorded in MP4 format for playback on a PC or other portable electronic devices without having to convert the files.

Additional features of the LUMIX GF5 include:

Price and Availability
The Panasonic LUMIX DMC-GF5 will be available in black, white and red later this year in the following kit options:

PhotographyBLOG9 years ago
You Are Here