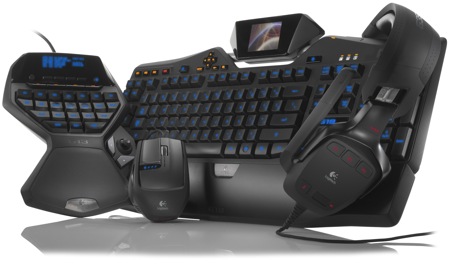 The G-series line of gaming peripherals from Logitech (SIX:LOGN) (NASDAQ:LOGI) gives gamers what they want: complete control. Today, Logitech unveiled an extension of its award-winning G-series by introducing three new products that deliver precision, high performance and customization: the Logitech G19 keyboard for gaming, the Logitech G35 surround sound headset and the Logitech G9x laser mouse. Delivering everything gamers need for a competitive edge — from programmable buttons to 7.1-channel surround sound and 5000 dpi laser sensors to backlit keys — Logitech’s best-in-class gaming peripherals are engineered to deliver everything you have always wanted.

“The G-series product line is all about seeing how far we can push the envelope, giving gamers extraordinary, engineered-to-win features developed as a result of our deep connection with the gaming community,” said Ruben Mookerjee, Logitech’s director of product marketing for gaming. “With each one of these new G-series products, gamers gain exceptional benefits; but most importantly, they can transform their gear to suit their gameplay.”

The Logitech G19 Keyboard for Gaming
Giving you an arsenal of advanced gaming technology, the Logitech G19 keyboard for gaming is the first Logitech keyboard to feature a color GamePanel LCD. The tiltable, 320-by-240-pixel display provides valuable in-game information for over sixty games, including World of Warcraft (requires installation of included Logitech GamePanel software). In addition to in-game information, the screen can show VoIP communication data, clock, CPU load, or other non-gaming specific items such as pictures or videos. And you can easily switch among types of information — without ever leaving your game.

Logitech’s newest keyboard for gaming offers 12 fully programmable G-keys with three macros per key, giving you 36 time-saving commands per game. Performing multiple actions simultaneously is also made easier with the keyboard’s multi-key input-functionality, which allows you to engage up to five keys at the same time.

A popular feature with previous Logitech keyboards for gaming, the Game Mode switch can disable the Windows key so you don’t get accidentally locked out of your game. And so you can connect and power devices — such as your G9x mouse or G35 headset — the G19 keyboard features two high-speed USB 2.0 ports.

The G19 keyboard for gaming is compatible with both Windows-based and Mac computers.

The Logitech G35 Surround Sound Headset
For game-changing immersion, the Logitech G35 headset is the first Logitech headset to offer 7.1 surround sound — a perfect complement to the growing number of action games and high-definition movies that support 7.1-channel surround sound. Powered by second-generation Dolby Headphone technology, the G35 headset simulates the complex acoustics of a listening room, creating a detailed, outside-the-head sound field. Plus, with its proprietary ear-enclosing design, the G35 headset greatly reduces ambient noise from interfering with your entertainment, while an adjustable, noise-canceling microphone focuses on your voice and reduces background noise.

If you want to sound like your World of Warcraft character or disguise your voice when gaming, you can install the included software to enjoy six voice-morphing options, including cyborg, giant, mutant, space squirrel, troll and alien. If you use popular chat clients such as Ventrilo or Team Speak, the G35 headset includes three G-keys on the left earpiece for one-touch command over voice morphing. Additional on-ear audio controls provide quick access to volume, microphone mute and surround sound adjustments.

To ensure your headset remains comfortable during long gaming sessions, the G35 headset features three swappable headbands — thin, thick and contoured designs — so you can select the style that fits you best.

The Logitech G9x Laser Mouse
Providing precision at any hand speed (up to 150 inches per second on most popular gaming-mousepad surfaces), the Logitech G9x laser mouse extends the promise of the award-winning Logitech G9 Laser Mouse with its next-generation laser sensor. Featuring on-the-fly adjustable dpi from 200 to 5000 dpi, the G9x mouse makes it easy to go from pixel-precise targeting to lightning-fast maneuvers without pausing the action.

The G9x mouse includes two interchangeable, snap-on grips that let you choose a fit and feel that’s best for your playing style. With more ways to tune for the way you play, the G9x mouse also features onboard memory — program up to five ready-to-play profiles. The weight-tuning system gives you up to 28 grams of extra weight. And custom-color LEDs let you match your G9x mouse to your personal preference — or the colors you choose for your G19 keyboard or G13 gameboard.

The Logitech G13 advanced gameboard wins Best of Innovations in Electronic Gaming
The new G-series products join the recently announced Logitech G13 advanced gameboard, which was just awarded the CES 2009 Design and Engineering Award: Best of Innovations in Electronic Gaming. The G13 gameboard offers a contoured design that complements the natural shape of your hand and fingers. So you don’t have to take your eyes off the screen, the concave keys along the home row make it easy to locate buttons by touch. And for a tactical advantage, the G13 gameboard includes 87 buttons, so you can set up custom button-profiles for each one of your favorite games, and a 160-by-43-pixel GamePanel LCD that shows live game stats, system info and messages from other players. The Logitech G13 advanced gameboard is available now in the U.S. and Europe in March for a suggested retail price of $79.99 (U.S.).

Everything USB11 years ago

WIRED12 years ago
You Are Here