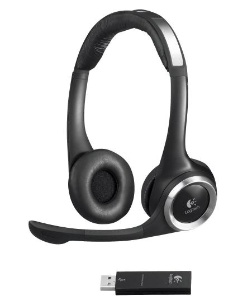 “More and more people are making voice calls over the Internet, but until now, they have had to choose between wired headsets that keep them tethered to their PCs or wireless headsets that offer poor audio and voice quality,” said Gina Clark, general manager and vice president of Logitech’s Internet Communications business unit. “With the Logitech ClearChat PC Wireless headset, people can make a PC call while grabbing a snack, sitting on the couch or leaning back in their chair – PC calling has never been so convenient and never sounded so good.”

The Logitech ClearChat PC Wireless enables people to move freely up to 33 feet (10 meters) from their computer. With the included USB transmitter, the headset effortlessly connects to a PC or Mac computer right out of the box – no software or pairing required. And to help ensure no call gets interrupted, the ClearChat PC Wireless headset’s 2.4 GHz wireless technology features both crisp, uncompressed stereo audio and an advanced algorithm that minimizes interference -even in the busiest wireless environments, such as an airport, office or hotel.

The ClearChat PC Wireless delivers rich, high-quality stereo audio through proprietary laser-tuned audio drivers. For optimal voice clarity, the headset features a noise-canceling microphone on a flexible boom that adjusts to the desired distance from the mouth. Additionally, volume and microphone mute controls are located on the right earpiece and the microphone automatically mutes when rotated to an upright position. As an added convenience, the microphone emits a soft, red glow when muted.

In addition to Internet calling, the ClearChat PC Wireless headset provides high-performance audio and a comfortable design that make it ideal for listening to music, watching movies or playing games on the PC.

Pricing and Availability
The Logitech ClearChat PC Wireless headset is expected to be available in the U.S. and Europe in May for a suggested retail price of $99.99 (U.S.).