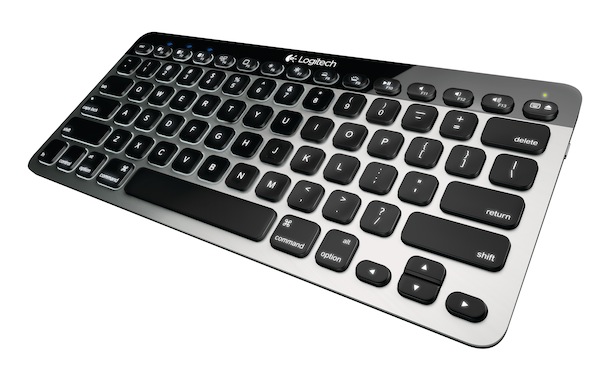 Logitech announced a wireless keyboard for Mac, iPad and iPhone. It is designed so you can easily go from typing an e-mail on your Mac to taking notes on your iPad to replying to a text on your iPhone, by simply pressing a button.

The Logitech Bluetooth Easy-Switch Keyboard can pair with up to three Apple devices simultaneously, and its familiar Mac layout features the keys you’d expect, including Command, Brightness and Mission Control. Its sleek aluminum design matches the Apple style, making it look right at home next to your Mac, iPad or iPhone.

In addition to its attractive design, this keyboard was built to maximize usability and power. The bright illumination of its backlit key characters makes them easy to read in low light conditions or at night, so you can type in any environment. Virtually anticipating your needs, the keyboard turns on its illumination when your hands approach, and it automatically dims or brightens based on the amount of light in the room.

Pricing and Availability
The Logitech Bluetooth Easy-Switch Keyboard will be available in the U.S. and Europe in January 2013, for $99.99