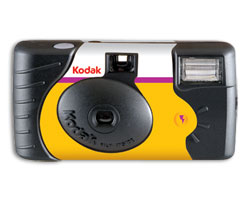 Eastman Kodak Company has achieved the milestone of recycling 1.5 billion single-use cameras, including both Kodak cameras and those from the company’s competitors.

Started in 1990, the Kodak single-use camera recycling program, works with photofinishing outlets to return used single-use cameras to Kodak sorting centers, where they are then routed for recycling. Nearly every piece of the camera is either recycled or reused in the ongoing production of more single-use cameras, bringing down costs for consumers and keeping huge amounts of waste out of landfills. Laid end-to-end, the 1.5 billion cameras would stretch 120,000 miles, which is enough to circle the earth five times or reach more than halfway to the moon.

With these increased recycling rates, it means that today most Kodak single-use cameras are produced from recycled camera bodies.

“We’re excited to remain a leading champion of recycling in the U.S. and beyond with this program that is now in its 19th year,” said Joel Proegler, general manager, Film Capture and vice president, Film, Photofinishing & Entertainment Group. “Even in this digital age, there continues to be strong demand for single-use cameras, and we’re continuing to meet this demand in an environmentally responsible manner.”

“This is truly an impressive accomplishment. We work with electronics, appliance and automobile manufacturers around the world to help them ‘close-the-loop’ by recovering plastics from their end-of-life products and remanufacturing them so they can be used in new products. Kodak has accomplished this and more, even re-using some of its recovered components in new single-use cameras,” said Dr. Mike Biddle, President and Founder of MBA Polymers, Inc. “Additionally, Kodak has embraced a ‘design for recycling’ philosophy, made its cameras easier to dismantle, and used compatible materials and components to assist the recycling process.”