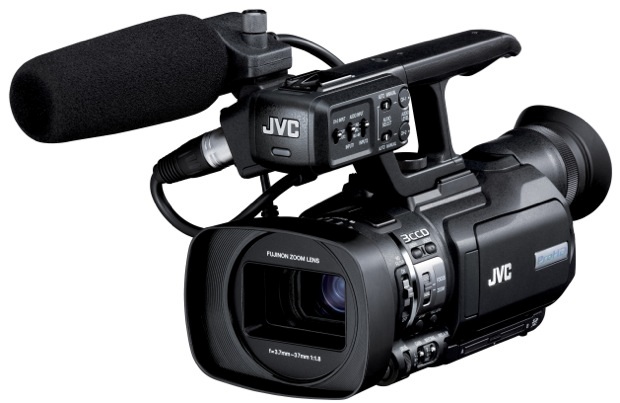 With its 3-CCD imagers, the GY-HM150 offers full HD 1080p, 1080i, and 720p recording at a variety of frame and bit rates. JVC’s native file recording, the industry’s fastest shoot-to-edit workflow, provides native .MOV files for Final Cut Pro or Adobe Premiere, as well as native .MP4 files for other NLE systems. It also records SD footage (480i) as standard DV files (.AVI or .MOV).

The GY-HM150 records to non-proprietary SDHC media cards like other ProHD models, but it also accepts new SDXC cards, which are currently available with capacities up to 128 GB. In addition to relay mode for uninterrupted recording, the camcorder allows simultaneous recording to both memory cards for instant backup or client copy. See more specifications on JVC’s product page. 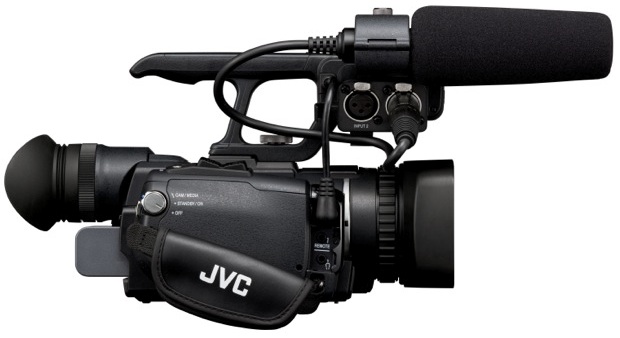 “The new GY-HM150 offers a familiar, comfortable form factor with a number of productive new features that many of our customers requested,” said Craig Yanagi, manager of marketing and brand strategy. “It only weighs about three pounds including the battery, but it delivers performance that rivals larger and far more expensive cameras. Plus, the option to record in SD is very important to a number of broadcasters and other video professionals who have not yet made the transition to HD-only production in the field.”

A new Pre Rec (retro cache) feature continuously records and stores up to five seconds of footage in cache memory, which helps prevent missed shots of breaking events. There is also a new time-lapse (interval) recording option. With the GY-HM150’s new Clip Cutter feature, unwanted footage can be trimmed from the beginning or the end of existing clips in the camera, which reduces file sizes and conserves space on the media card.

Other new features include an upgraded LCD monitor and color viewfinder, as well as a new 3.5mm input for use with optional wired remote controls for focus, zoom, iris, and recording functions. This greatly improves camera operation when using jibs and cranes, and even allows the GY-HM150 to be used in small studio applications.

Manual controls on the GY-HM150 have been improved as well, with an iris dial next to the built-in Fujinon 10:1 HD zoom lens and six user-assignable buttons. The camcorder ships with a shotgun mic and provides two XLR audio inputs with phantom power, plus manual audio level controls with audio meter.

Price and Availability
The JVC GY-HM150 ProHD camcorder will be available in October 2011 for $3,495.