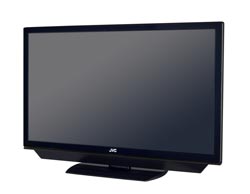 Three JVC full HD LCD TVs incorporating CMD II will be available in the U.S. this fall as part of a new JVC High Speed 2 series. JVC was the first to introduce high speed LCD technology with its launch last year of a 37-inch set with a 120Hz refresh rate.

To reduce blurring of moving images, JVC’s CMD II uses a frame doubling driver (120Hz) and motion interpolation. A JVC algorithm detects the movement in images and increases the frame rate to 120Hz to create an interpolated image that is displayed as two frames — the original plus the newly interpolated frame — in the same time it takes a conventional (60Hz) set to display a single frame. This delivers moving images without blurring or flickering. And compared to other frame doubling technologies, inserting an interpolated frame maintains image brightness.

JVC’s original CMD technology was applied to a 720p LCD panel and detected only horizontal motion. In its new full HD incarnation, JVC’s Clear Motion Drive detects image data from more than 8,000 surrounding dots in a frame to create a pixel and calculate movement from the current frame to the next. This process is performed on all two million pixels (1920 x 1080) in a frame to interpolate for movement in all directions.

To get the most out of the double-speed full HD panels, JVC will use its fifth generation D.I.S.T. (Digital Image Scaling Technology) engine on the JVC-exclusive 32-bit Genessa chip. This optimizes processing for more natural shades of grey compared to an 8-bit panel. JVC’s 10-bit panel with the Genessa chip also renders more than one billion colors for rich, natural color reproduction. Also, with a 10-bit panel the reproducible color gamut is 102 percent based on the NTSC standard, displaying full edge-to-edge color of an NTSC picture. And finally, the single-chip processing ensures superior detection, analysis and control of the signal in real time.

JVC will launch its new High Speed 2 line this fall, comprised of three sets featuring Clear Motion Drive II — the 47-inch LT-47X898, the 42-inch LT-42X898 and the 37-inch LT-37X898. Each will offer three HDMI (1.3) compatible inputs. They will also feature a new cabinet that pushes JVC’s design mantra of “maximum screen, minimum cabinet” farther than previous models, with a bezel that measures less than 1.5 inches all the way around and a cabinet that is shorter and narrower than previous models in the same screen size.