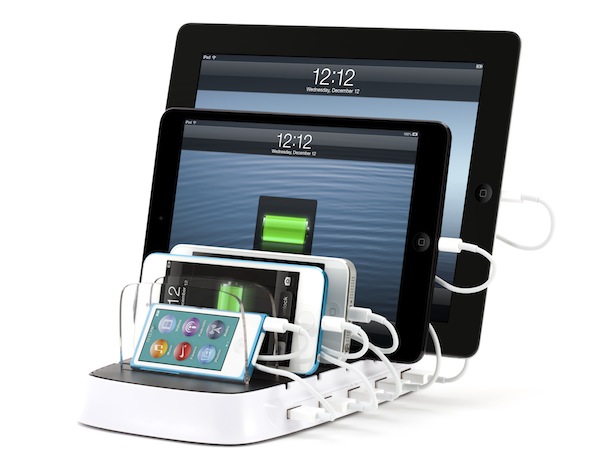 Griffin Technology just released the PowerDock 5, a space-saving table-top rack that enables charging of five Apple iOS devices at the same time, from a single power source. Designed for convenience and efficiency, PowerDock 5 contains five charging bays, each boasting 10 watts of power and a clear backrest, large enough to accommodate an iPad without the need to remove even the largest of cases, including Griffin’s own military-duty Survivor.

PowerDock 5 is the ideal for small offices or work groups, or a family full of iOS device users. The charger gives each device its own charging port and its own clear backrest. Each charging bay is roomy enough to accommodate your iPhone, iPod or iPad in their cases. An illuminated status light tells when PowerDock 5 is powered up and ready to charge.

Price and Availability
The Griffin PowerDock 5 is available now for $99.99.

Commentary
A 100 bucks for a glorified USB hub, gimme a break. Griffin could have at least included five short 30-pin or lightning charging cables to make the price more palatable and the product more convenient. Integrated dock connectors would have made the device very sleek. Nonetheless, if you can forgo a little elegance there are a slew of USB hubs on Amazon to consider in the $10 to $40 range. Currently the D-Link 7-port hub is $25 at Amazon.

However, on the plus side for Griffin their charger may charge your device faster. A blog post in 2010 suggests their previous iPad chargers re-charged and iPad faster than other USB connection sources.