Denon just announced the IN-Command Series home theater receivers that put consumers “in command and in control” of all their home entertainment in new and exciting ways. The company's new IN-Command Series line, expected to be available in May 2011, includes models AVR-2112CI ($649.99), AVR-2312CI ($849.99) and AVR-3312CI ($1,049.99). They all feature a host of easy-to-use command and control and content access capabilities and ahead-of-the-curve lifestyle features geared toward today's “networked home,” as well as a sleek new Denon cosmetic, with a newly designed front panel and thinner profile.

Advanced Networking, Plus Host of Apple iPod/iPhone and CI-Friendly Capabilities
Denon's new IN-Command Series receivers were designed from the ground up to meet the needs of today's “content-hungry” consumer, featuring advanced multi-zone networking capabilities, as well as maximum compatibility with Apple wireless devices and other home entertainment source components. For instance, all three models include the new AirPlay music streaming feature*, which lets users literally “give their home a soundtrack” by unleashing their iTunes music libraries whether from Mac or PC , as well as music stored on their Apple mobile devices, to select Denon components through their Wi-Fi enabled networks from iPhone, iPad or iPod Touch. Notably, the receivers also feature iPod/iPhone Direct Connectivity via USB (also works with iPad) for quick and simple integration of Apple devices into the larger home network. Adding to their advanced networking capabilities, Denon's unique “Party Mode Plus” allows simultaneous music playback in up to five rooms when connected to compatible Denon party mode-compliant products. 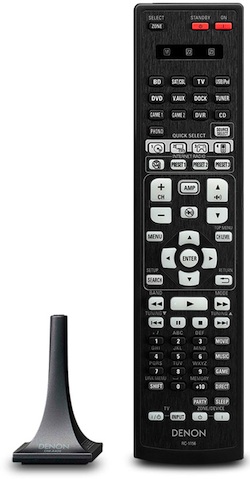 Advanced Internet Interface Capabilities
To provide maximum compatibity and interface capabiltiies with the Internet, all three IN-Command Series receivers feature a Web browser function. Responding to the growing consumer demand for ways to incorporate more personal content and content from Internet sources into their home entertainment systems, all three allow users to stream both the free Pandora and Flickr services, as well as stream audio and photos directly from their PCs, choose from over 12,000 Internet radio stations and connect to the subscription-based Rhapsody and Napster music services.** Users can also stream and listen to music stored on a Windows PC and media server products or NAS devices supporting the DLNA standard. Further reflecting the importance Denon places on leading-edge Web access, all are officially “Compatible with Windows 7,” ensuring full compatibility with the updated 'Play To' functionality of the new Microsoft operating system.

Features Geared Toward Custom Integrators
Custom integrators will appreciate the fact that Audyssey MultEQ XT Auto Setup and Calibration in all three units allows for total ease and accuracy of set-up, along with the ability to use the advanced Audyssey Pro installer package (in Models AVR-2312CI and AVR-3312CI), which measures ideal sonic performance in up to 32 different positions, defining the ultimate sound quality for virtually any size or shape room. The units also feature remote access via the Internet, RS-232 and IP Control for third-party controllers and are Control4 certified.

“The 'IN' in 'IN-Command' stands for Integrated Network, allowing consumers to be “in command” of all their content, components and entertainment environments so they can enjoy music, movies and games, with dramatically enhanced surround sound, plus interactive web access, multi-zone networking and more. From initial set-up to maximum enjoyment, these new receivers do it all in the simplest and most straightforward ways possible. Importantly, many of the features in these CI-friendly models represent leading-edge technologies and capabilities of models priced significantly higher. ”
— Jeff Talmadge, Director, Product Development & Systems Integration, Denon Electronics