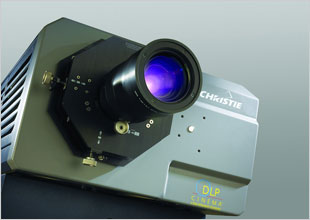 Christie, a global leader in Digital Cinema, announced record sales of its DLP Cinema projection systems worldwide for 2007, outpacing the entire field of competition to take a commanding 80% control of the market, a nearly 20% increase over the previous year. Christie surpassed original industry expectations, setting a strong pace of installation that has culminated in more than 4,400 digital screens to date across North and South America, Europe, South Africa, Australia and Asia.

Christie’s Digital Cinema successes are marked by historic wins with some of the biggest players in the industry worldwide, including:

Christie’s success comes just over two and a half years after introducing the groundbreaking Christie/AIX funding plan, which many analysts credit with jump-starting the large-scale deployment of Digital Cinema and revolutionizing the industry. The innovative Virtual Print Fee (VPF) formula won the backing of the major Hollywood studios and was quickly adopted as the industry standard, serving as the prototype for all new deployment agreements. Today, large national chains and major regional exhibitors are benefiting from the operational efficiencies of Digital Cinema and are reaching new audiences with alternative content programming opportunities and stunning picture quality. Christie remains committed to supporting existing and emerging customers in this new era of entertainment.

“Christie is the only DLP Cinema projection manufacturer to enter the market with more than 75 years of innovation and a long-established commitment to exhibitors,” noted Jack Kline, president and COO, Christie Digital Systems USA, Inc. “Our unrivaled experience is a major factor in our success, helping us secure exclusive deals with exhibitors, distributors, movie studios, and technology providers to install the next generation of entertainment in theaters worldwide. As they transition to digital, exhibitors know that the show must go on, and to ensure the systems run at optimum levels, they are going with a proven winner.”

Christie’s Managed Services group, the largest cinema technical organization in the world, is supporting more than 8,000 screens at over 585 sites across the U.S. and Canada. Exhibitors are contracting for the company’s managed services solutions in record number, citing Christie’s three-quarter century of innovation and proven reliability — more than any other DLP Cinema projector manufacturer — as a prime factor in their decision. The service features over 150 network operations center personnel, service and field application engineers, covering all manufacturers’ film and digital projectors, networking and support technologies.

Kline observed that Christie has expanded its manufacturing facilities to become a state-of-the-art worldwide center of excellence, helping the company maintain and extend its formidable lead. Christie has also significantly increased its technical staff, expanded its managed services personnel, streamlined internal processes, and strengthened its quality control to ensure a standard of quality and reliability that is unsurpassed in the industry.

About Christie
Christie is a leader in visual solutions for world-class organizations, offering diverse applications for business, entertainment, and industry. A leading innovator in film projection since 1929 and a pioneer in digital projection systems since 1979, Christie has established a global reputation as a total service provider and the world’s single source manufacturer of a variety of display technologies and solutions. With its recent acquisition of Vista Controls Systems, Corp., Christie offers the most complete and advanced solutions for cinema, live venues, control rooms, business presentations, training facilities, 3D and Virtual Reality, simulation and education as well as industrial and government environments. For more information, visit www.christiedigital.com