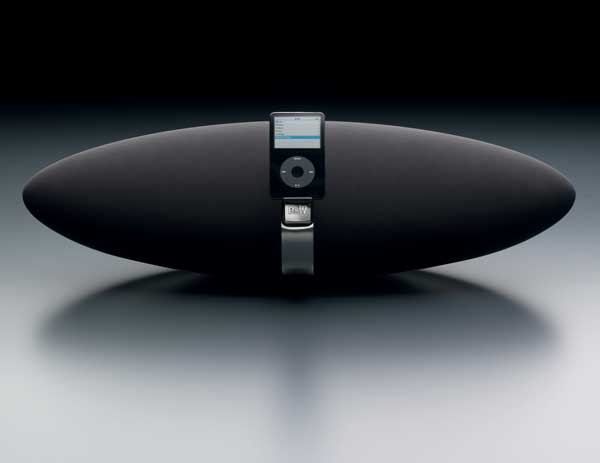 After a much anticipated wait, Bowers & Wilkins (B&W), creator of the world’s most advanced home theater and hifi loudspeaker systems, releases Zeppelin for purchase. This luxury system is certified “Made For iPod” and is designed for use with the current model range (including the recently released iPod line). Zeppelin is now available at select Apple Stores nationwide and online at a manufacturer’s suggested retail price of $599. Zeppelin will offer the first opportunity for many US consumers to enjoy this legendary technology, imported directly from Bowers & Wilkins’ award winning speaker range. Bowers & Wilkins’ state-of-the-art products are enjoyed by music lovers worldwide and are the preferred monitoring loudspeakers in professional recording studios from Abbey Road Studios to Skywalker Sound.

“The iPod deserves no less than the best audio reproduction possible” says Evert Huizing, B&W Executive VP of Business Development, “and we believe Zeppelin delivers the truest, most life-like sound from it. We’ve incorporated our 40 years of technology and know-how into a product that we hope will allow us to introduce a new market to the level of sound quality enjoyed by professionals every day. As our strapline says – listen and you’ll see.”

The Inspiration
As the number one imported premium loudspeaker brand in the world, Bowers & Wilkins is a name familiar to musicians and audiophiles worldwide. Applying its audiophile approach to iPod reproduction has resulted in the remarkable Zeppelin.

The Design
In creating Zeppelin, Bowers & Wilkins has married top-of-the-line audio quality with cutting edge design. Led by Morten Warren, the award-winning team at Native Design, London, has created the look of Zeppelin to accommodate its function: its larger bass unit sits in the center of the device and the form tapers towards the ends, where the smaller mid-range and tweeter drivers are accommodated. At barely two feet wide, Zeppelin is the perfect accessory for any room in the house or office space. Stunningly finished in polished stainless steel, Zeppelin makes an ideal music system for office, bedroom, kitchen, or second home, or simply as an iPod-extension appliance, delivering a level of performance and musicality unequalled by most “Made For iPod” devices.

About Bowers & Wilkins
Bowers & Wilkins is Britain’s leading exporter of loudspeakers and the number one imported brand in North America. Since 1966, Bowers & Wilkins’ “Quest for Perfection” has resulted in a succession of technical loudspeaker innovations that have satisfied the world’s most demanding listeners. Its products’ rave reviews and universal acceptance as monitors for professional music recording have helped Bowers & Wilkins become the dominant premium loudspeaker company throughout the world.