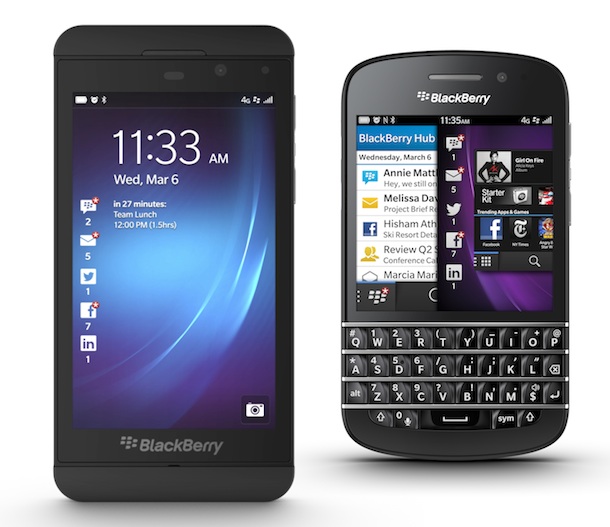 BlackBerry just announced two LTE smartphones, along with the new BlackBerry 10 mobile operating system. The Z10 is an all-touch smartphone, while the Q10 includes a physical keyboard that the company is known for, as well as touch capabilities.

The new BlackBerry 10 smartphones are elegant and distinctive, and the fastest, most advanced BlackBerry smartphones yet. They feature 1.5 Ghz dual core processors with 2GB of RAM, 16GB of internal storage, and an expandable memory card slot. They include the latest enhancements in high density pixel and screen technology to display clear, sharp, and incredibly vivid images. Both feature a micro HDMI out port for presentations, and advanced sensors such NFC (near field communications) to support mobile payments and the exchange of information with a tap of the smartphone. They also have a removable battery.

A range of accessories for the new BlackBerry 10 smartphones, including the new BlackBerry Mini Stereo Speaker as well as a variety of carrying and charging solutions including a unique charger that provides on-the-go charging, will be available from select carriers and retailers.

Highlights of BlackBerry 10
BlackBerry 10 is a robust and reliable platform that is smooth and responsive. It has a modern design and a gesture-based interface that is highly discoverable. It is designed to support, learn, and adapt to the way you work and share with features like: