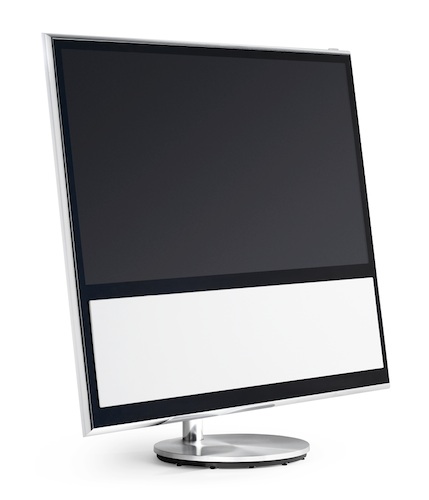 Bang & Olufsen has introduced the LED-backlit BeoVision 11, their first Smart TV that lets you switch easily between television channels and the internet. There is also a Picture and Picture function where the viewer can watch both at the same time.

Just connect your set to the internet, wirelessly or wired, and start enjoying web-based content on the big screen in seconds. Choose between popular apps such as YouTube and Facebook, or surf wherever else you want to go. You can even save bookmarks. Page navigation can be handled with the dedicated remote by Bang & Olufsen, or you can use your iPad or Android tablet – and the BeoRemote app – to take advantage of QWERTY keyboards.

Convenient control is an important part of the BeoVision 11 experience. Both of Bang & Olufsen’s remotes, Beo4 and Beo6, provide simple and intuitive control of all TV functions – as well as any other connected device – and even home automation for the truly connected.

BeoVision 11 is a DLNA TV, which makes it simple to stream music from a smart phone and to watch a film stored on a NAS drive. In addition it provides connectivity to just about anything you want to throw at it through Wireless Network 2.4 or 5 GHz. Other connections include an Ethernet connection for software updates, two USB ports, three control outlets for control of up to six connected devices, and six HDMI sockets. Additionally, Apple aficionados will appreciate the dedicated space inside the cabinet for Apple TV.

Bang & Olufsen has engineered a high-quality sonic experience that features six speakers into BeoVision 11’s slim interior, and powers each of them with its own dedicated 32 watt ICEpower amplifier. Their enclosure is supported with rubber bushings to wipe out vibrations in the rest of the TV. A powerful new digital signal-processing algorithm pulls it all together, and switches seamlessly between dedicated sound modes when it detects music, sports, drama, movies, etc. The result is an impressive, clear sound experience – uncommonly produced from a flat-screen television. BeoVision 11 offers a full digital surround sound decoder module that delivers up to 12 audio channels using Bang & Olufsen’s TrueImage processor. True Image technology dynamically handles up-and down-mixing of audio signals to match the number of audio channels in the incoming signal with the available loudspeakers, yielding an audio performance that is unparalleled by any other television.

At the heart of BeoVision 11 is an all-new video engine that drives the 240Hz LED-based LCD screen, with glare polarizer, in either 2D or 3D. The two-sided LED backlight features 1.5 D local dimming to significantly improve contrast in 2D viewing. Digital noise and motion blur are radically reduced to reveal a stunningly natural picture, even in the most demanding of circumstances.

BeoVision 11 provides a strong, elegant interior design statement and offers a wealth of color choices to match almost any décor. You can choose between six front fabric colors, (blue, black, white, silver, red, and dark gray), a front frame in silver or black, and rear cabinet in black or white.

It has four stand options and is easy to place the Bang & Olufsen Smart TV where it best fits into the family’s home and lifestyle. Nothing beats the everyday luxury of the motorized floor stand or the new motorized wall bracket: just grab the remote to turn the TV out from the wall in any angle up to 90 degrees and turn it back — and out of the way — when you are done. A wall bracket with manual turn and an easel stand are also available.