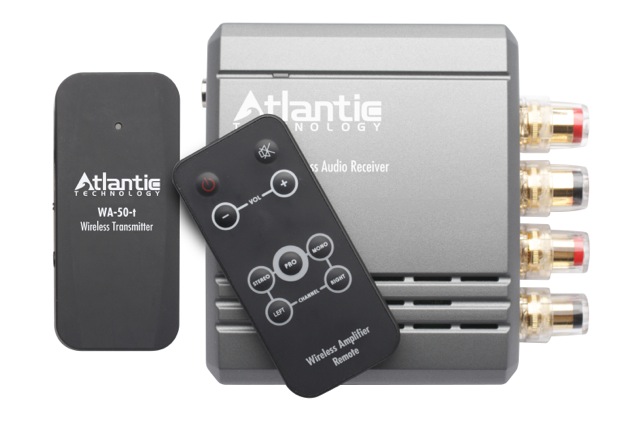 Atlantic Technology introduced a 30-watt amplified wireless audio system which can drive a pair of loudspeakers at ranges of up to 300 feet from the transmitter. The Atlantic Technology WA-5030 Wireless Transmitter/Amplifier System combines a brand new WA-5030-r zone amplifier and wireless receiver with the company’s proven three-zone WA-50-t wireless transmitter. The WA-50-t transmitter can be sourced from any RCA analog audio line outputs or to a Mac or PC via a built-in USB connection. It broadcasts lossless, uncompressed CD-quality digital audio with a 48 kHz sampling rate over on the 2.4 GHz radio band. The wireless technology is highly robust with no data drop issues and essentially no time delay over distances of 150 to 300 feet depending on intervening structures. A three-position zone switch on both the transmitter and receiver allow up-to three separate WA-5030 systems to be used in close proximity to each other.

The system’s WA-5030-r receiver/amplifier contains a matching 2.4 GHz RF section, digital-to-analog converter, and a high-quality 30-watts per channel stereo power amplifier. The receiver is is suitable for driving most compact bookshelf or in-wall/ceiling 8-ohm speakers to high sound levels with low distortion. The WA-5030-r also comes with an infrared wireless remote control, to allow users adjust volume and to mute the system. WA-5030-r can also be programmed to drive speakers in the bi-amp mode or to drive speakers in a commercial or distributed audio system.

The WA-5030 wireless audio system is easy to set up and use. Up to three WA-50-t transmitters and three receivers per transmitter can be used in a system. Simply connect the WA-50-t transmitter to the desired RCA audio outputs or USB source, and the WA-5030-r receiver to a loudspeaker system. Both the transmitter and receiver have a three-position switch that assigns each pairing to either Zone 1, Zone 2, or Zone 3.

Price and Availability
The Atlantic Technology WA-5030 Powered Wireless Audio System, consisting of a transmitter, receiver, remote control, USB Cable, and RCA input cables, will have a suggested retail price of $399, with additional WA-5030-r receivers available for $199 each. They are now shipping to dealers.