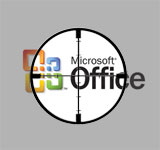 It's open season on Microsoft Office. Google is distributing Sun Microsystems' StarOffice, a rival productivity software suite, and also has its own web-based productivity suite called Google Docs and Spreadsheets. As part of its iWork suite, Apple has a new spreadsheet called Numbers that could compete with Microsoft's Excel. There is also OpenOffice, an open source suite built on the same code base as Sun's StarOffice, along with several web-based products — such as ThinkFree and Zoho — that have been eyeballing Microsoft's turf.

All of these rivals emerge at a time when Microsoft's dominance in productivity software — Microsoft Word, PowerPoint and Excel — remains strong, with market share based on revenue of at least 95%, according to research firm International Data Corp. For the fiscal year ending June 30, Microsoft reported net income of $14 billion on revenues of $51.1 billion. Microsoft's business division, which includes Office, reported annual revenues of $16.4 billion. Meanwhile, Microsoft is benefiting from a new product cycle as customers upgrade to Office 2007.

So why are rivals targeting Microsoft's Office juggernaut?

Wharton professors suggest various reasons: Just shaving a point of market share from Microsoft, some point out, could be lucrative. Others note that strategically, rivals want to weaken Microsoft's dominance any way they can. Still others point to the fact that good old-fashioned competition is alive and well in the technology industry, and Microsoft is a worthy opponent on many different fronts.

"Office, even more than Windows, is Microsoft's cash cow," says Wharton legal studies and business ethics professor Kevin Werbach. "With the rate of new Windows versions slowing, Office upgrades are likely to be an even more significant revenue generator for Microsoft in the years ahead. Office is the platform that truly injects Microsoft into almost all computer users' lives. Have you ever tried to show up at a conference with a non-PowerPoint presentation, or send a document to colleagues in a format other than Word?"

Yet, even though Office is entrenched, Kendall Whitehouse, senior director of IT at Wharton, says Microsoft's productivity suite is an easier mark than trying to beat Windows, the company's operating system monopoly. "Microsoft Office may not be as unassailable as it seems," he notes, adding that a product with a better user interface, less complicated options and the ability to read and write Office documents could put a dent in Office's market share.

Wharton management professor Lawrence Hrebiniak suggests that there is also a little gamesmanship between Microsoft and its rivals. "Another part of the Office fascination is the appeal of going against a giant," says Hrebiniak. "People want some form of competition." Google may have additional motives for challenging Microsoft, he says. For instance, Hrebiniak describes Google's latest effort to distribute StarOffice as more of "a distraction play." "Microsoft is trying to diversify and attack Google. Google is giving away a rival office suite as a distraction and a way to dent Microsoft. The strategy is not always the most rational between these two. Part of it is a game."

Rivals are clearly hoping that their products will give them one more touch point to hook consumers, according to Werbach. For Google, it's about selling more advertising. For Apple's iWork, it's about giving people another reason to buy an iMac. For others, it's about selling software as a web-based service.

The current crop of competitors to Microsoft Office differs compared to previous Microsoft challengers, such as Novell and Netscape. And that's what makes them dangerous, Werbach adds. "The big players like Google, Apple and Sun don't need to make money directly on the software applications, since they have other revenue streams." In the end, these rivals can easily undercut Office on price, experiment and try to gain market share. "Microsoft's competitors hope to change the economics of the productivity application market by essentially giving away these [suites]," Werbach says.

"Room for a Better Mousetrap"

For now, the game plan among Microsoft's rivals appears to be to nibble at Office's market share.

On August 15, Sun announced that its StarOffice suite would be distributed for free as part of the Google Pack software download service. Google Pack features software selected by Google for its customers to download. Through the service, Google offers the Mozilla Firefox browser, StarOffice, Skype and other applications. Sun also integrated Google's web search into StarOffice to download. Sun bills StarOffice as "a full-featured office productivity suite that's compatible with Microsoft Office at just a slice of the cost."

Sun charges $69.95 for StarOffice as a stand alone product. The least expensive Microsoft Office version is $149.99 for the home and student version, with prices going as high as $679 for Microsoft Office 2007 Ultimate. Those prices are estimated retail prices, according to Microsoft.

In addition, Apple on August 7 announced its new iMac, iLife 08 and iWork 08 suite. Apple's iWork office productivity suite includes Pages, a word processor, Keynote, which is presentation software, and Numbers, a new spreadsheet application. In a statement, Apple CEO Steve Jobs called Pages and Keynote "incredibly easy" and added that Numbers "is far more intuitive and easy to use than anything else out there." Numbers features enhanced charting, easier data sorting and tables that can be rearranged on the fly. Wall Street Journal personal technology columnist Walter Mossberg reports that Apple's answer to Office is elegant, but less powerful than Microsoft's version. iWork is $79 for a single user.

According to Gartner analyst Michael Silver, productivity suites from Apple and Google aren't necessarily designed to be Office killers. The goal is to take a small slice of a big market. "If you look at how much money Office makes for Microsoft, it's a huge amount. It's about augmenting. If you can get 1% of the market, or even one half of a percent, that's a good business," Silver says.

He points out that "Office hasn't changed much in the last 10 years," a fact that opens the door for others to try to innovate their way into the market. "There's room for a better mousetrap at some point. It's about enabling users to work differently or better." Whitehouse agrees. "Few consumers need all the features for Microsoft Office. For many people, ease of use is more important." And, he says, that opens the door for a company like Apple, which has a proven history of creating consumer-friendly applications.

The most critical feature of these rivals to Office may be the ability to share documents with the product against which they are competing. "You bought Word because people send you Word files and you need to edit them," says Whitehouse. "The one thing that's critical [in a competing product] is the ability to read and write those files. If you have a Mac [using iWork] that can read and write Word and PowerPoint files, then your ability to switch [away from Office] becomes a lot easier. The differentiator becomes user interface, speed and stability."

Most of the alternatives to Microsoft Office, including Apple's iWork and Sun's StarOffice, can both open and save documents compatible with Office. Going forward, the ability to interchange documents among competing products may become easier as a result of an industry trend to establish public standards for document formats. For example, the state of Massachusetts originally dictated that all document formats would have to conform to an open source standard called the OpenDocument Format (ODF). Microsoft promoted its standard, the similarly named Office Open XML. Massachusetts ultimately decided to accept both standards.

The adoption of one standard like ODF would make it easier for rival products to succeed against Office, notes Silver. While Whitehouse believes it is unlikely that a single standard will emerge, the fact that vendors are publicly documenting their file formats is a significant step forward. "Published document formats make it easier to reliably interchange documents and to create files that remain durable over time." And, perhaps, they also make it easier to create software that can compete against the market dominant product.

While efforts to create alternatives to Office are notable, Microsoft still has many things working in its favor. According to Hrebiniak, Microsoft's biggest asset in the productivity software war is inertia. "Why wouldn't you stick with Microsoft in light of its new products?" he asks. "Customers would rather stick to what is known even if alternatives are simple to use. It's a habit." It would take vastly improved software from a rival to encourage customers to switch. "You won't see Microsoft rolling over any time soon."

However, Werbach notes that conditions could change quickly for Microsoft, which is investing heavily in new web-based tools, called Live, and using Office to sell other corporate software. "I don't think we're close to Microsoft's Office franchise collapsing, but once the change in the market happens, it could be sudden. Microsoft is well aware of this. It's putting tremendous resources into its Live initiative and other programs to reduce its dependence on desktop software."

Microsoft is also working to make Office more valuable, says Silver, by integrating it with corporate software such as its SharePoint Server, a product that allows customers to collaborate, manage content and communicate online. "Microsoft saw a few years ago that Office was becoming a commodity, so it built backend pieces to go with it. The organizations we speak to are most interested in Office 2007 because of SharePoint."

That strategy may be paying off. Microsoft chief financial officer Chris Liddell said July 19 that the company's business division, which includes Office, will show annual revenue growth of 11% to 12%. "The first quarter will continue to benefit from strong customer acceptance of the Microsoft Office system," said Liddell on Microsoft's fourth quarter conference call.

But the signs of Office faltering will be clear if they emerge. "We will know Office is vulnerable when large enterprises start deploying one of the alternative office suites instead of Office," says Werbach. "Companies that purchase thousands of Office licenses [know] that few of their users need most of its features, and that they could realize massive savings with a more lightweight alternative."

Hrebiniak acknowledges that competitors may be able to peel off some of Office's market share. But Microsoft has the resources and intensity to fight back, he adds. Indeed, with $23.4 billion in cash and short term investments as of June 30, "Microsoft is huge and well armored."

Reprinted with permission from Knowledge@Wharton, the online research and business analysis journal of the Wharton School of the University of Pennsylvania."

Home > Latest > Articles > Rivals Set Their Sights on Microsoft Office: Can They Topple the Giant?