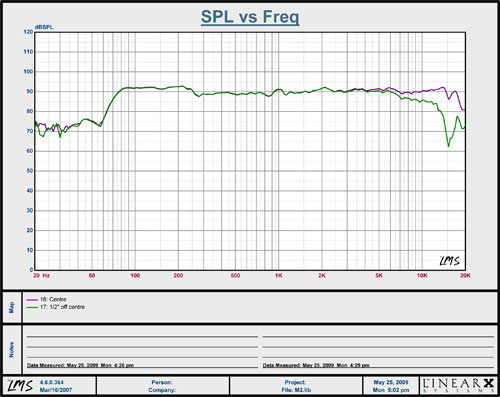 Then we moved the measuring microphone 1/2-inch to the side, off center from the sweet spot, and recorded another frequency-response curve. The green curve in Figure 1 shows the first comb cancellation effect at 15 kHz.

Then we moved the microphone 1 inch off center and ran another curve. In Figure 2, the green curve shows the next comb filter cancellation at 5.5 kHz. In Figure 3, the measurement microphone was moved 8 inches off center from the sweet spot. The dark greenish curve shows the pronounced comb-filtering cancellations beginning just below 1.5 kHz and extending all the way up to 18 kHz. The dips in response resemble the downward teeth of a comb, hence the name “comb filtering”. 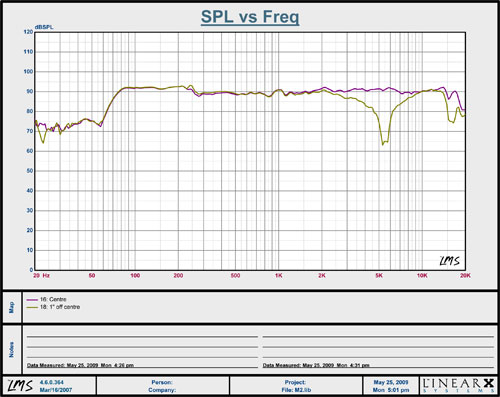 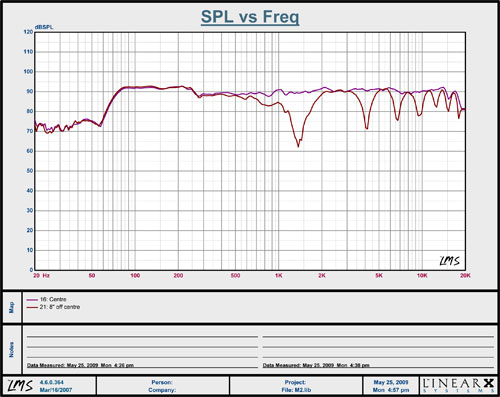 The cancellations (dips) are what the single measurement microphone “hears” and measures using a full-frequency test sweep when the signals from the two M2 speakers don’t perfectly overlap. This seems like an acoustic effect that may be potentially nasty in nature and should be avoided. These are pronounced cancellations, yet when we play music or speech over a pair of M2 speakers, we don’t hear these comb filtering effects. Why is that?

How Does the Brain Deal With Comb Effects?
The precedence effect (previously known as the Haas Effect) dictates that our brain and ears pick out the location of a sound source that reaches our ears in the first few milliseconds of a sound’s arrival. The first sound to arrive at the ears enables you to determine the direction of the source. After hearing an initial signal, the brain will suppress any later-arriving signals, up to about 30 milliseconds. These later-arriving signals that show up with steady-state pink noise (within the 30-millisecond window) do not disrupt the brain’s precise localization mechanism. What occurs is that you do not “hear” the contributions of the later-arriving sounds from the adjacent drivers that are responsible for the measurement artifact of comb filtering. Or rather, your brain hears and processes them but disregards them lest they confuse our directional acuity; in fact all they do in the listener is create a sense of added spaciousness. Numerous scientific researchers, including definitive experiments conducted by Dr. Floyd Toole and Dr. Sean Olive, have verified this. Even in a room having lots of reflections, our brains correctly determine the direction of sounds. (By the way, sounds arriving at our ears after a delay of more than 30 milliseconds are perceived as a second sound or echo.)

Critics of comb filtering who believe it to be a big issue in speaker design have the option of listening in mono to avoid the comb filtering. But we all much prefer listening to music and vocalists in stereo–it’s far more spacious and realistic–and the reason is that our brains and two ears simply ignore those canceling signals that on paper show up with a test signal and a single microphone.

So put on a great recording, even in 5.1 channels or SACD/DVD-Audio multi-channel, pour a nice glass of wine or open a beer, and thrill to the realism and spaciousness of great musical reproduction. Stop obsessing over comb filtering; it doesn’t matter!

(Enthusiasts who would like to read further about comb filtering and psycho-acoustics should explore Sound Reproduction: Loudspeakers and Rooms, by Floyd E. Toole, Focal Press.)