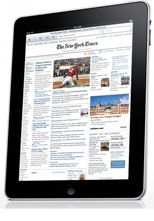 Apple, which brought consumers such hits as the iPod and iPhone, is wading into a new product category with the launch of its iPad, a touch-screen tablet computer that CEO Steve Jobs has said puts "the Internet in your hands" — and apparently much more.

At a press event on January 27, Jobs unveiled the 1.5 pound tablet computing device with a 9.7 inch screen and built-in Internet connectivity, which will be available for purchase sometime in late March. "We call it the iPad. What this device does is extraordinary," said Jobs. "You can browse the web with it. It's phenomenal. It's way better than a laptop [and] way better than a smartphone."

Jobs positioned the much-hyped iPad as a companion product in Apple's lineup: The device fits between the iPhone and its Macbook laptop, with prices ranging from $499 to $829 depending on options such as the amount of memory and type of wireless connectivity (wi-fi and/or an additional wireless data plan through AT&T). Competitively, the iPad is targeted at netbooks — popular mini-laptops with screens that measure 10 inches or less — and tablet-style e-book readers such as Amazon.com's Kindle, Barnes & Noble's nook and Sony's Reader, according to experts at Wharton. In other words, Jobs positioned the iPad as a universal computing device that can play music, movies and video games, show pictures and hold a library of books.

What's unclear is whether consumers will buy into the idea of a universal device that meets all their needs — or whether the iPad will become just one more gadget to juggle.

Apple's latest device may find a market, but it won't be easy, according to Peter Fader, a Wharton marketing professor. He says that the iPad, like other tablet PCs, has to answer a core question in the consumer's mind: Why do I need one? "Tablets fell into the cracks [in the past] because they couldn't answer that question, and the iPad is the same."

Others doubt whether the iPad packs a big enough technical punch to replace several devices. Wharton legal studies and business ethics professor Andrea Matwyshyn says that the iPad's technical specifications — notably a 10-hour battery life — may not enable it to function as a universal device, at least in its first generation, although she expects Apple to improve the product. According to Eric Clemons, an operations and information management professor at Wharton, the device also lacks the storage to replace multiple devices: Whereas the iPad comes in 16, 32 and 64 gigabyte (GB) versions, Apple's high-end iPhone alone offers up to 32GB of storage, and netbooks generally start with 160GB of storage.

In addition, the iPad, which uses the same operating system that powers the iPhone, doesn't support Adobe Systems' Flash software, which is used on many web sites. As a result, web surfing on the iPad may not compare to traditional laptops. Jobs' presentation didn't directly address iPad's lack of support for Flash, but one of the web sites displayed in his demonstration had a blank square where video or animated Flash content would have appeared.

If consumers still need to carry a laptop for Flash-enabled web browsing, a phone for placing calls, and an iPod for storing movies, books and music, "then what exactly do I need the iPad for?" asks Clemons.

That's a question many consumers are likely to ask, say experts at Wharton. "I'm struggling to place the iPad myself. It's not clear how exactly to position this device," says Kartik Hosanagar, an operations and information management professor at Wharton. "Initially, the iPad is a direct competitor to Kindle. But the iPad faces a superset of competitors: The iPhone, Kindle, iPod and the netbook." Although it's not clear how quickly — or even if — Apple's device will replace these gadgets, the advent of the iPad "highlights that these devices are converging," he adds.

Tablet Trials
Apple is entering a market where other technology vendors have ventured before but have failed to gain significant traction. The concept of a tablet-like computing device is now making a comeback courtesy of companies such as Apple and Hewlett-Packard, but the idea dates back to the 1960s, when Xerox's Palo Alto Research Center proposed the idea of a notebook computer — called the "Dynabook" — that was never constructed.

In 1968, Stanley Kubrick's film 2001: A Space Odyssey featured a tablet computer showing a video. Microsoft chairman Bill Gates demonstrated a tablet PC prototype in 2001. Later in the decade, tablet PCs were produced by some manufacturers but never gained significant traction beyond niche uses. In 2010, a bevy of PC vendors ranging from HP to Lenovo introduced devices that feature tablet displays at the Consumer Electronics Show.

The problem with tablet PCs is simple: Consumers aren't sure what to do with them, say experts at Wharton. Jobs positioned the iPad as a device that is more intimate than a laptop, but more capable than a smartphone. But he also faces the same challenge that his fellow technology CEOs faced when they introduced their tablets: He has to convince consumers that they need another gadget.

However, the iPad does have something going for it that past tablets did not: It already has a software and content ecosystem. "The nice thing Apple and Amazon [with its Kindle] have done is tie the device to specific content," says Hosanagar. "Previously, the tablet was just another piece of hardware."

Apple applied the same design principles to the iPad that it used with the iPhone and iPod touch, and it tightly integrated the iPad with its iTunes store and the 140,000 applications that also run on the iPhone. By doing so, Apple is giving its latest device the same ingredients that made the iPod and iPhone hits. "The success of the device will depend on content and the applications that go with it," says Joshua Eliashberg, a marketing professor at Wharton. Matwyshyn agrees. "The apps are going to be critical [for the iPad's success]. The App Store for the iPhone and iPod touch allowed consumers to use the devices in appealing ways and bred loyalty," she says.

Since all of the iPhone's applications work on the iPad, the latter should gain some traction with customers. However, Eliashberg notes that Apple will certainly develop unique iPad-only applications to convince consumers that they need another device to carry. "The consumer will ask for applications unique to the iPad that benefit from a larger screen, the vibrant colors and latest technology," he says.

Following Apple's press event, the company released a software developer's kit in a move to generate applications for the iPad before its release next month.

Despite past tablet failures, "there's clearly a market for book-sized devices," says Karl Ulrich, an operations and information management professor at Wharton. According to Ulrich, the timing may be right for the iPad since e-readers and netbooks have become popular. "There's a market here as borne out by the Kindle and netbooks."

For iPad to compete directly with the Kindle, Apple will need to build an e-book content store that rivals Amazon's. To that end, at the iPad press event Jobs announced partnerships with five large book publishers: Penguin Group, HarperCollins, Hachette Book Group, Simon & Schuster and McGraw-Hill. The company also said the iPad would support ePub, an open standard for e-books, although using a proprietary digital rights management system for protected content. Apple, however, didn't show off magazines and newspapers other than The New York Times during its iPad demonstration.

Experts at Wharton say that Apple will have to sign more content deals if the iPad is going to compete against Amazon's Kindle. Media companies, however, may readily flock to the iPad. "Print media's future is in doubt," notes Eliashberg. "The iPad is an opportunity for newspapers and magazines to start getting paid for content as they move away from print to digital." In fact, some analysts have speculated that The New York Times' recent announcement that it plans to begin charging for some content coincided with the iPad launch for that very reason.

Allen Weiner, an analyst at research firm Gartner, said that as it now stands, the iPad is no savior for the publishing industry — at least not until software developers create unique applications for viewing publications on the device. "For both newspapers and magazines, the iPad remains a mystery. The demo of The New York Times, which was created in a compressed timeframe, is not much indication of what potential newspapers [could] have on the iPad," Weiner wrote in a blog post. "The initial focus is on paid applications (and again, there is no evidence that consumers will pay for digital newspaper content) as there was no mention of advertising support from Apple. The same goes for magazine publishers who now have the color device they have asked for but will need to experiment with varied content applications and business models."

The iPad is a "wakeup call to other people in the media industry," Fader notes. "It's a catalyst for [new business models]." He predicts that many content providers will create applications for the iPad that will be distinct enough to entice consumers to subscribe. "There's no question that media businesses will rush into it and maybe too quickly," he adds. "These companies need to think through the business models first."

Analysts expect that, in time, Apple's content available for the iPad could rival Amazon's selection. But it is not clear that consumers will rush to purchase Apple's content offerings. In his presentation, Jobs highlighted Apple's book store but revealed higher prices than Amazon's standard price of $9.99 — a source of ongoing contention among book publishers who feel that Amazon is keeping prices low to boost Kindle sales. Meanwhile, Amazon has two iPhone applications at Apple's App Store, which will also be available on the iPad. The first is an application that allows you to shop through the iPhone. The other, Kindle for the iPhone, allows a consumer to read e-books and synchronize them with the Kindle.

Will the iPad eventually undercut the Kindle? Ulrich says he expects that the iPad "will ultimately kill the e-reader" and he doesn't see that category of device surviving. Fader calls the Kindle "a dead gadget walking." Eliashberg, however, says there's still a market for single use devices. "The iPad will affect sales of the Kindle, but there are many examples where consumers buy both multiple purpose and single usage devices. You still see people buying digital cameras even though you can take pictures with your smartphone. Consumers also buy [MP3] players, even though that capability is available on phones. These devices can coexist."

Still, for Apple to convince people that they should purchase yet another device, the pitch for the iPad should revolve around device consolidation, say experts at Wharton. Clearly, consumers would welcome convergence. "Ten years ago there were very few of us who traveled with all these devices, but that's no longer true today," says Clemons.

Matwyshyn agrees, but she doesn't think the iPad can realistically consolidate devices just yet. In addition to its memory and battery life shortfalls, she questions whether the iPad can maintain a solid Internet connection: AT&T has taken a reputation hit because its networks have struggled to handle data traffic from the iPhone. "For people who don't want to carry phone, laptop, music player and e-reader, the iPad could be appealing," she says. "The iPad isn't that universal device yet, but it could evolve to be one."