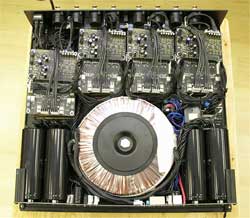 Axiom’s A1400-8 multichannel amplifier seen
from the inside. The gain stages are right
at the top of this picture. Each board is two
channels.

An audio amplifier can boost the small incoming audio signal’s voltage by increasing its voltage, and current. The degree to which the amplifier magnifies the low-level input signal compared to its output signal is the amplifier’s gain, and it is expressed in decibels (dB) because it’s a ratio of the amplifier’s output divided by its input.

In amplifier discussions, we don’t normally talk about the specifics of an amplifier’s gain because it involves writing formulae and a background in engineering, mathematics, and an understanding of logarithms. However, the following explanation should help you understand the concept of amplifier gain.

For illustration, let’s consider a typical line-level audio input signal from your CD player that averages about 0.5 volts. That isn’t nearly enough power to drive the voice coils of your loudspeakers; the signal’s magnitude will need to be amplified or increased. When you connect the 0.5-volt AC audio signal from the CD player to any line-level input jack of your stereo amplifier or AV receiver, it will increase that 0.5-volt signal to an output signal of, say, 40 volts. If you divide 40 volts by 0.5 volts, you get 80. So you could say your amplifier or receiver has a voltage gain of 38 dB.

If you were so inclined, you could express this as a formula. If you know the amplifier gain in dB and the strength of the input signal, you could use this information to determine the output power of the amplifier. Or, not knowing the gain, you could measure the input signal strength and the amplifier’s output power, and thus determine the amplifier’s gain, always expressed in dB. For some audio signals that are extremely weak, like those from a moving-magnet (MM) phono cartridge (often 5 millivolts, which is 5/1000th of a volt) or even smaller, from a moving-coil (MC) cartridge (typically about 0.2 millivolts), a preamplifier will be necessary to raise the tiny input voltage to the 1-volt or 2-volt range in order to drive the input stage of most amplifiers. To do that, the preamp will need at least 40 dB or more of gain. Engineers will often talk of “adding an extra gain stage” to an amplifier in order to accommodate a very small audio input signal.