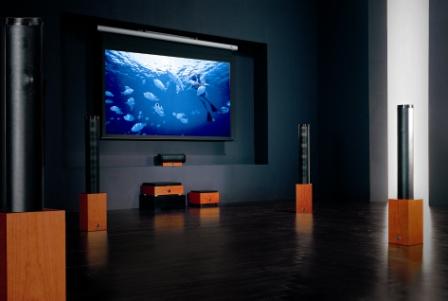 I have always contended that if someone made a complete high-end “home theater in a box” it would sell. Most consumers get overwhelmed with all the products available and one manufacturer could make it easier if all the components were sold as a “system”.

The system approach is not new, but is mostly limited to low-end home theater speaker systems. The MONDO system incorporates state-of-the art components, including a media center (server), a 5.1 speaker system, a video projector and a screen. The all-in-one system has everything you need for a complete home theater.

I first noticed MONDO at the CEDIA (Custom Electronic Design and Installation Association) Show in Denver. They are fairly new to the US market. The central hub of the system is the XL7000 Media Server. Instead of the normal metal box with all the interfaces staring you in the face, this piece is wrapped from the waist down in beautiful wood and only one button in the front and the power button on the top. The XL7000 has an 800W 8 channel Digital Amplifier, a wireless LAN, a 720p up-scaling DVD player and has 1 TB of storage on its two 500GB 7200RPM hard drives.

All you will hear is oooh’s and aaah’s from your friends when they first gaze upon this system. The main front speakers and rear speakers stand four feet tall. The bottom foot and a half is the same beautiful wood finish as the media center. In addition, they incorporated a metal front cylinder screen that houses the tweeters and woofers. Both front and rear speakers share the same 27mm high-definition soft dome tweeter. The front speakers have two 4.5′ high-definition poly cone woofers each, and the rear speakers have one a piece. The center channel consists of the same array as the front speakers but with the cylinder on its side with the same nice wood finished stand.

The MONDO 720p DLP front projector brings the system to life. It has the DLP Dark Chip2 with a native resolution of 1280×720. The brightness is 800 ANSI Lumens and the projector has a contrast ratio of 3600:1. The projector is also very quiet at 29db. The projector is connected by a DVI to fiber optic transmitter/receiver which allows a generous 100 feet of placement options. This is great feature to have if you are trying to mount the projector on the ceiling and you needed plenty of cable to carry the signal.

Set-up was a breeze. MONDO provides all the cables with a very detailed color pullout to diagram all the possibilities that you might need to set up your system. The Center Channel speaker only had a three-foot cable to reach the XL7000. This was a little short, but I think the designers at MONDO planned the Center Channel to sit atop the XL7000. Even though it is very attractive sitting on top of the media center, I personally would rather have more options. The tower speakers had plenty of cables to reach my whole entertainment room. The cables are a little unique – you just plug them in like you would an outlet in your wall. After going through the setup for the media center I had the whole system out of the box and playing a DVD in about an hour.

After a week of getting adjusted to the system I was able to really dive in and take control of the all the capabilities of the XL7000. The first movie that I tested was Gladiator. MONDO’s Movie Profiler program up-converted the image to the native 720p of the projector. I was very impressed by the level of detail gained by the conversion that MONDO built into the video processing. The Movie Profiler software enables you to control the aspect ratio of the picture as well as all of the color settings. You can also save settings for individual movies. This puts all the controls in your hands to adjust the picture to your individual preferences. With all the adjustments made I was immersed in the movie with stunning 720p resolution on the 110″ screen. The projector performed effortlessly. 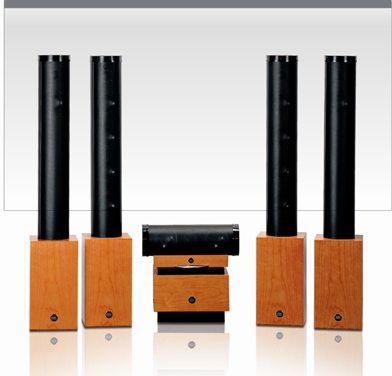 The speakers performed beautifully. I thought I was listening to speakers that cost several thousand dollars more. The highs were clean and crisp – never missing a note from the film. The speakers are impeccably matched throughout the room. I was eager to turn the system up very loud, but the Microsoft Media Center software prevents the volume from exceeding a level of “25”. That level is more than adequate and the speakers kept performing without distortion. MONDO also includes their Music Profiler program that enables you to digitally control the gain and frequency range of each speaker channel, save acoustic settings and digitally tune any speakers to produce the best sound quality according to their room acoustics and speaker performance. So basically you can save music and create unlimited profiles for each individual song.

If you are not familiar with Microsoft’s Media Center, here is a quick overview. Most of us have at least one computer in the house. Microsoft Media Center computer allows you to store all of your movies, songs, pictures, games and any other project you are working with. Then you can watch or play any of them right on your TV. You can even set the system up so that you can record all of your shows that come on TV and then replay them when you are ready. With MONDO’s 1 TB hard drive space you can upload your whole CD, picture and DVD library and still have plenty of room to spare. Then when you want to watch a movie or play a song you don’t have to be looking for the disk. Just let the Media Center find it for you. If you are into video games nothing beats playing your favorite game on a 110″ screen. Unless you are playing your favorite game in one window, watching TV in another, and typing this review all at the same time as I am right now. The Microsoft Media Center has a host of other features but I just wanted to highlight a few if you were not familiar with the possibilities.

After Gladiator, I downloaded some HD clips from the Internet using the media center and you will be amazed by the clarity of the picture. A few movies later and you won’t want to leave your entertainment room. For music listening I put in a Norah Jones DVD to test out the vocals. That is when I really fell in love with the system. The sound was very natural. Just to make sure I also tried out Seal – Live in Paris. Again you are just going to be blown away by the performance of the system.

MONDO has done an excellent job designing the system. There are, however, some barriers that had to be addressed. Copyright protection laws and the current Microsoft Media Center Software prevent the system from living up to its full potential. The MONDO system does not have HDMI or component video inputs. So you can’t use the DVR functionality to record hi-def. Only standard definition, non-copyright protected, content can be recorded using the s-video or coaxial inputs.

It should be noted that Microsoft’s new media center software — Vista — will be released at the end of January. Vista’s expanded feature set has the potential to alleviate the current issues. It might be wise to wait and see if MONDO will release a new server with Vista and more connectivity options. As it stands MONDO’s innovative design and excellent performance is likely to satisfy most home theater lovers.

Editorial Disclosure:
The views and opinions expressed are solely that of the author, and may not be the views of eCoustics.com. Every effort was made to insure fair, accurate, honest, and reliable reporting. The equipment was provided via loan from the manufacturer.

At the time of publication the manufacturer was not a current advertiser, had never purchased advertising, and has no known intent to start advertising on eCoustics.com. The author affirms he and all immediate family members are neither shareholders, partners, investors, subsidiary, consultant, contractor, agency, or affiliate of the manufacturer.

Sony PS5 Shortage to Continue into 2022