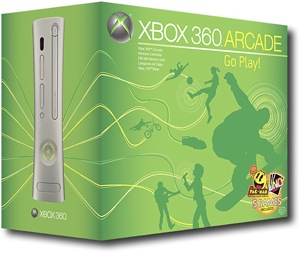 Imagine if friends and families had the ability to instantly watch movies from Netflix, live out their musical fantasies through “Rock Band 2” (Harmonix/MTV Games) and “Lips” (iNiS Corp./Microsoft Game Studios), star in their own Hollywood classics with “You’re in the Movies,” or have the power to never miss the latest episode of “Heroes” — all from one device, starting at $1991. That device is Xbox 360, and Microsoft Corp. today announced it will offer the gaming and entertainment console, which offers the leading Xbox LIVE service, at a new low price in the United States. Beginning Sept. 5, Xbox 360 Arcade will retail for the estimated retail price of $199.99, the Xbox 360 console for $299.99 and Xbox 360 Elite for $399.99.

“We are thrilled to be the first next-generation console on the market to reach $199, a price that invites everyone to enjoy Xbox 360,” said Don Mattrick, senior vice president of the Interactive Entertainment Business at Microsoft. “Xbox 360 delivers amazing performance at an extraordinary value with the leading online service and best lineup of games, downloadable movies and TV shows available from a console. The majority of consumers make the decision to buy consoles once the price falls to this mark, making this an important milestone for consumers and the industry.”

History shows that more than 75 percent of all console sales happen after the price falls below the $200 mark. For millions of consumers who have been waiting for the perfect time to buy an Xbox 360 console, their moment has finally arrived. At $199, Xbox 360 is the most affordable next-generation console on the market, offering something for everyone with the most dynamic, interactive entertainment experiences available.

Xbox 360 Arcade plus a 12-month Xbox LIVE Gold Membership and a Netflix subscription costs $100 less than 12 months of digital cable. Xbox 360 invites everyone into a limitless world where the best games, movies and TV shows can be enjoyed live side-by-side with your personal pictures and music library.

No matter what kind of game makes your heart race, Xbox 360 has something for everyone. Music lovers can play new games such as “Lips” (iNiS/Microsoft Game Studios), the only singing game that offers wireless motion-sensitive microphones and the ability to sing along to your own music collection2; “Guitar Hero World Tour” (Activision/RedOctane); and “Rock Band 2” (Harmonix/MTV Games), the next evolution of the franchise exclusively launching on Xbox 360 that allows players to virtually step into the shoes of their favorite bands. Players can enjoy family-friendly games such as the big- screen movie-maker “You’re in the Movies” (Codemasters Software Company Ltd./Microsoft) and blockbusters such as “Gears of War 2,” the biggest entertainment event of this holiday season. Plus, with Xbox LIVE Arcade, downloadable games are available that the entire family can enjoy — with titles such as “Braid,” “Castle Crashers,” “Geometry Wars: Retro Evolved 2,” “PAC-MAN Championship Edition” and “Uno.”3

Whether you want access to streaming movies and TV shows or a library of high-definition content, you will find it on Xbox 360. Starting this fall, Xbox 360 is the only game console to offer instant streaming of more than 12,000 feature films and television shows from Netflix4. In addition, the Xbox LIVE Video store has more than twice as many hours of high-definition (HD) movies and TV shows than the nearest competitor5. Download your favorite TV shows such as “30 Rock,” “The Office” and “House,” and even get a little old school with “The A-Team.” If it’s movies you want, check out the latest blockbusters and the best in family films, cult classics, horror and much more, all available through Xbox LIVE and Xbox 360.

2 The functionality of songs played from personal music collections will vary.

VideoGamer.com5 years ago
Advertisement. Scroll to continue reading.
You Are Here