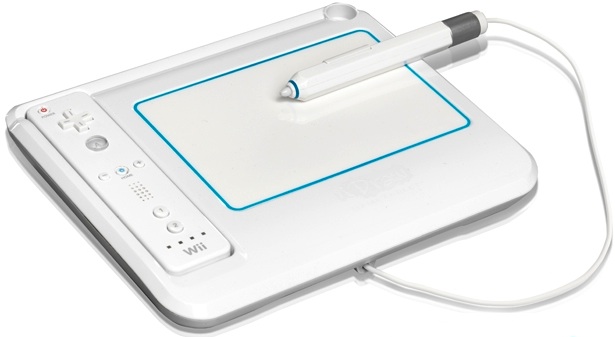 The uDraw GameTablet is a first-of-its-kind, innovative new hardware device that provides an entirely new and entertaining way for kids and families to play on Wii. The uDraw GameTablet combines a deep and immersive level of creative freedom with a line of video games developed to expand gameplay and expression.

The device is a small white handheld tablet with a 4″ x 6″ drawing space and detachable, pressure-sensitive stylus designed to offer more subtle control and precision than available on the traditional Wii Remote. The Wii Remote docks discretely within the uDraw GameTablet, allowing the device to draw power directly from the Wii Remote. A convenient storage area hides the Wii Remote wrist strap and stylus when not in use. The uDraw GameTablet also features tilt-and-roll movement options, allowing players to interact and control in-game characters by moving and directing them through game levels. Additionally, SD-card support enables players to save and print their artwork and other uDraw creations. 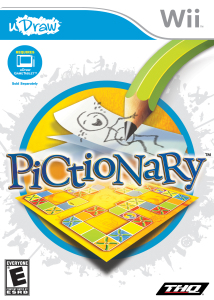 uDraw Studio
Packaged with the uDraw GameTablet, uDraw Studio was designed as a showcase piece for the capabilities of the device and features a robust set of art creation modes and user-friendly tools that help players create anything from simple doodles to intricate masterpieces that can be saved and shared.

Pictionary
Pictionary, the game of quick sketches and crazy guesses, has innovative new functionality and game modes for the whole family! In addition to great classic Pictionary play, new features include rotating canvases, one-line challenges and other fun gameplay modes in a lively game show setting.

Dood’s Big Adventure
In Dood’s Big Adventure, players will navigate their customizable Dood through 60 levels across four gameplay modes in a world where coloring books come to life and user-created doodles, characters and background art populates the in-game world.

“The uDraw GameTablet is designed to target consumers of all ages this holiday season with a compelling price point and familiar drawing-inspired gameplay mechanic that has been enhanced for today’s tech-savvy families.”
— Brian Farrell, THQ Chief Executive Officer

“We’ve designed the uDraw GameTablet to offer something for everyone: the kids can doodle, save their creations on an SD-Card and print their artwork for display on the refrigerator. Students can improve their skills through in-game tutorial lessons. And the whole family can sit down together for family game time with products like Pictionary.”
— Martin Good, EVP, THQ Kids, Family, Casual Games and Global Online Services